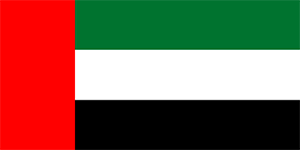 The flag of the United Arab Emirates was adopted on December 2, 1971. The flag is made in pan-Arab colors: red, green, white and black, symbolizing Arab unity. 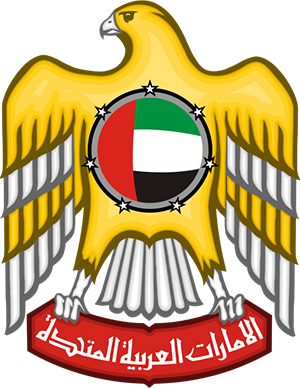 The emblem of the United Arab Emirates depicts a yellow falcon - a symbol of autocracy in the country, most of which is desert. The tail unit symbolizes the seven emirates - seven feathers.
Until 2008, on the chest of a falcon in a red circle (a symbol of courage and independence in the struggle for freedom), a wooden schooner "dhow" smoothly glided over the blue sea waves. It was on such vessels that Arab pearl divers and militant pirates went out to sea.
At the moment, instead of a “dhow” on the chest of a falcon, there is a shield with the colors of the national flag of the UAE.

Applying for a visa to the UAE

From February 1, 2017, free visas to the UAE upon arrival in the country became available for Russian tourists. A tourist visa is placed in the passport for a period of 30 days, with the possibility of a one-time extension for another 30 days. For a trip for a long period, Russians, as before, can receive a 3-month multi- and single-entry UAE visa.

How to get to the UAE from Russia on your own

El-Imarat el-Arabiya el-Muttahid - this is the Arabic name of this country of the Persian Gulf, uniting 7 kingdoms: Dubai, Abu Dhabi, Ajman, Sharjah, Ras al-Khaimah, Fujairah, Umm al-Qaiwain. The Middle Eastern state is located in the northeast of the Arabian Peninsula, Qatar, Saudi Arabia and Oman have a common border with it.

Rub al-Khali, one of the largest, hot and dry deserts in the world, occupies most of the territory of the United Arab Emirates (UAE). In the eastern part of the country, the Hajar Mountains are located, their height reaches 1500 meters above sea level. Between them and the Gulf of Oman stretches the green valley of Al-Batin.

The Emirates are located in a zone of tropical desert climate, in which sandstorms are quite frequent. Here in winter the temperature reaches +23 degrees, in summer up to +50, and rains are rare and occur from November to May.

The nature of the country is not very diverse, but adapted to such harsh conditions. Date and coconut palms, acacia, grapes and lemon trees grow in oases. The fauna is represented by the Arabian leopard and oryx (gemsbok, one of the species of saber-horned antelopes), one-humped camel and wild goats. disappearance in 1972.  To revive the species, a worldwide program was adopted - animals were bred from several individuals from zoos and private ownership. In 1982, the first Arabian oryx were introduced to Oman, then to Jordan, Saudi Arabia, the United Arab Emirates, Israel and Bahrain. In 2012, 500 individuals were released into the wild in Abu Dhabi.

The country's history is divided into two periods: pre-Islamic, which the locals themselves call "jahiliya" ("primitiveness", "ignorance") and Islamic. The first inhabitants of the territory of the modern Arab Emirates were nomadic tribes who hunted, fished, mined pearls and bred camels.

Since ancient times, camels have become an integral part of the life of nomadic Arabs. On the "ships of the desert" they moved along the hot sands of the deserts, they made clothes from the wool of animals, meat was used for food, litter served as fuel for the fire.
In the 7th century, when large settlements already existed on the lands of the Emirates - Dubai, Fujairah, Sharjah and others - together with the power of the Arab Caliphate, Islam came here.

In 1820, under pressure from the powerful East India Company, seven rulers signed the "General Treaty", which led to the division of Oman (it included the modern United Arab Emirates) into three parts - the Imamate of Oman, the Sultanate of Muscat and the Principality of the Pirate Coast. Subsequently, they began to be called Treaty Oman. The protectorate of Britain lasted here until 1971.

Interesting fact: < b>In the XVIII century, the inhabitants of the Arab principalities, who were mainly engaged in trade, began to come into conflict with the East India Company, whose fleet completely monopolized the cargo transportation in the Persian Gulf. As a result, the British began to call the Arab merchants pirates, and the coastal lands the Pirate Coast.


The next chapter in the history of the country began on December 2, 1971 with a meeting of six Arab sheikhs in Abu Dhabi. It was then that a decision was made to create a federation that united all territories and resources. A year later, the seventh emirate, Ras al-Khaimah, became part of it.

Only 11% of the population of the UAE are indigenous people. They work in government agencies and hold senior positions in financial firms. The remaining 89% are specialists and workers who come to the Emirates from nearby Arab states, South Asia and North Africa.

An interesting fact: When they get married, UAE citizens receive land or money from the state as a gift for its purchase and an interest-free loan for building a house. The loan can be repaid from the country's budget after the birth of the third child.


Local children go to school from 6 to 15 years old, and this is compulsory for everyone. For indigenous people, education is free. In the system of higher educational institutions - public and private universities. Only citizens of the UAE can study in free public ones, and foreign students can study in private ones. The latter live in special towns built at the expense of different countries. Now the UAE has campuses in the UK, USA, France, Spain and Germany.

The country's medicine is also represented by public and private clinics, and for the indigenous people of the United Arab Emirates, medical care is paid by the state. In recent years, medical tourism has begun to develop in the country. The most popular areas are cardiac surgery and cardiology, orthopedics and oncology.

Since 1984, UAE athletes have been taking part in the Summer Olympic Games. In the Emirates, as in all Arab countries, local sports are very popular - & nbsp; camel racing and falconry. In the Emirate of Fujairah, you can watch bullfights - fighting animals grapple with horns and butt until the weaker one escapes.

Emirati cuisine is traditional for other countries of the Middle East. There are a lot of spices, spices and no pork. Popular local dishes are lamb with raisins and chicken with honey. A popular dessert is delicious Turkish delight, halva and dates.

You can bring jewelry, copper coffee pots, stone and wooden figures of camels as a souvenir from the UAE.

Public transport in the country is a taxi, including a pink women's one, which only ladies can use and work on it as drivers. For independent movement around the country, you can rent a car. To do this, you need to have an international driver's license. If you don't have one, you can rent a car with a driver.

The UAE is a great country for beach lovers and for those who are always ready to increase the level of adrenaline in their blood - they will be interested in high-speed jeep safari through the Rub el desert Khali. In the emirate of Ras al-Khaimah, you can take part in a mountain safari, and those who cannot imagine their life without the sky should go to Umm el-Kaiwan - there is a famous flying club where you can try your hand at paragliding, parachuting, as well as learn how to pilot a light aircraft. The emirate of Fujairah will become a paradise for fishermen and divers.

One of the amazing sights of the country is the world's largest artificial island, Palm Jumeirah, located in Dubai. In shape, it resembles a giant palm tree, on which hotels and expensive villas are “hung”.

< br> Another recognizable landmark of Dubai is the Burj Al Arab Hotel, better known as the "Sail".

In the country's capital, Abu Dhabi, you can visit the Sheikh Zayed Mosque, one of the six largest in the world. Everyone is allowed to enter it. The mosque got its name in honor of Sheikh Zayed ibn Sultan al-Nahyan, the first president of the country.