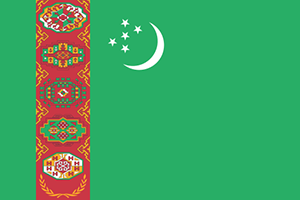 The flag of Turkmenistan (Turkm. Türkmenistanyň baýdagy) was approved on February 19, 1992. The flag is a rectangular green cloth with a vertical red-burgundy stripe and five ornaments at the base of the flag. Below this strip are olive branches. Next to the stripe at the top edge of the flag is a white crescent and five white stars. Five carpet ornaments (so-called gels) of the Turkmen tribes: Akhalteke, Yomut, Salyr, Chovdur, Ersars, mean five regions of the country. Each of the gels is framed with a carpet ornament, the outer edge of which is aligned with the edge of the strip. In the lower part of the strip, two olive branches intersecting at the bases and directed upwards in different directions are depicted. Each consists of ten leaves decreasing towards the ends, arranged in pairs, except for the lower and upper. The green part in the upper left corner shows a crescent and five five-pointed white stars. 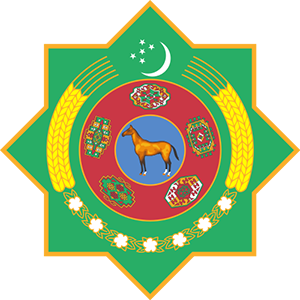 The state emblem of Turkmenistan is an eight-pointed green star with a yellow-gold border, in which two circles of blue and red are inscribed. The circles are separated by yellow-gold stripes of the same width. On a green background of an octahedron around a red circle, the main elements of national wealth and symbols of the state are depicted: - in the lower part - seven open five-leaf boxes of white cotton with green leaves; - in the middle part - ears of golden wheat, two ears on each side of the coat of arms; - in the upper part - a crescent with five five-pointed white stars. On the annular strip of a red circle measuring 2 diameters of a blue circle, five main carpet gels are depicted clockwise: ahalteke, salyr, ersars, chovdur, yomut, which symbolize the friendship and unity of the Turkmen people. A horse of the Akhal-Teke breed is depicted in the blue circle.

Applying for a visa to Turkmenistan

Russian citizens need a visa to visit Turkmenistan. If the period of stay in the country does not exceed 10 days, then you can get a visa upon arrival at the Ashgabat airport. In all other cases, to obtain a visa, you should apply to the diplomatic mission of the country in Russia.

How to get to Turkmenistan from Russia on your own

Flights from Moscow to Ashgabat are operated by Turkmen Airlines and S7.
News
ПУБЛИКАЦИИ

Turkmenistan is a very ancient and colorful country, where beautiful Akhal-Teke horses and beautiful handmade carpets are a national treasure, and natural gas and oil are the basis of the national economy.

Turkmenistan is located in Central Asia and borders on Afghanistan and Iran , Kazakhstan and Uzbekistan. The waves of the Caspian Sea run to its western borders, the large bays of which - Krasnovodsky and Kara-Bogaz-Gol - are located on the territory of the country.

The main part of the state lies on the Aral-Caspian lowland, turning into the sandy deserts of the Turan lowland with many salt lakes - traces of the inland sea that was once here. Most of the territory of Turkmenistan is occupied by the Karakum desert. The famous Darvaza gas crater is located in the Karakum Desert. It is called the door to the underworld - it has been burning non-stop since 1971, when geologists set fire to this "hole" to burn gases harmful to humans and animals, and thinking that the fire will go out in a few days.

On the border with Uzbekistan rises the Kugitangtau ridge. The highest point of the country is located here - it is Ayribaba, or the Peak of the Great Turkmenbashi. The height of Airibaba is 3139 meters.

Turkmenistan is located in the zone of continental, arid climate. The number of sunny days in the country often reaches two hundred and seventy a year.

In the deserts, vegetation is sparse. The most common here are saxaul and buckwheat bush kandym, or zhuzgun. In the foothills, the flora is more diverse - juniper forests, thickets of almonds, poppies, tulips and irises bloom luxuriously in spring. The main agricultural crop in these areas is cotton. The fauna of Turkmenistan is more than 90 species of mammals, almost 400 species of birds and dozens of species of reptiles. Here you can meet the horse kulan, snow leopard, snow leopard, saiga, pelican and flamingo.

In the XXIII-XVIII centuries BC, the first kingdom arose on the Turkmen land - Bactria, which occupied the territory of modern eastern Turkmenistan, southern Uzbekistan, northern Afghanistan and western Tajikistan. On these lands, archaeologists still find unique artifacts left over from the disappeared people.
Over the centuries, these lands became part of the possessions of the Persians and Alexander the Great, were part of the Parthian kingdom, the Mongol Empire and not only. At the end of the 19th century, the territory of modern Turkmenistan became part of Russia, becoming part of the Transcaspian region. In October 1927, according to the national-state demarcation of the Soviet republics of Central Asia, the Turkmen SSR entered the Soviet Union, the capital of which was the city of Ashgabat.

Interesting fact: Ashgabat can be translated from Persian as "beloved city" because eshg means "love" and abad means "city" or " populated place.


After the collapse of the USSR, during the referendum on October 26, 1991, 93% of the inhabitants of Turkmenistan voted for the creation of an independent democratic state of Turkmenistan.

More 89% of the local population is Muslim. About 9% are Christians and 2% are adherents of other religious movements.

National literature and dramaturgy received an impetus to active development during the Soviet era. Among their main themes was the eradication of ancient prejudices, the equality of women, the successes of socialism. Among the most widely read Turkmen writers of that time was the poet and prose writer Berdy Kerbabaev.

In modern Turkmenistan, culture is under the control of the state. Under the office of the President of the country, there is a commission that assesses the artistic level of creative works and issues permission for their publication, stage production or filming.

A regulated network of educational institutions in Turkmenistan has been preserved since the times of the USSR. Only free public universities operate in the country - institutes, universities, academies, conservatories and others. Among them, the Turkmen State University named after Magtymguly, the International Turkmen-Turkish University, a branch of the Russian State University of Oil and Gas named after I.M. Gubkina.

The medical sphere is represented by the so-called public hospitals and private clinics. To visit the country, it is recommended to have a first-aid kit and international medical insurance with you.

Turkmen athletes took part in the 1996 Summer Olympics for the first time. Popular sports disciplines in the country are football and wrestling.

Interesting fact: The coach of the Kazan football club "Rubin" Kurban Berdyev is known to fans all over the world. He began his sports career as a midfielder in the Ashgabat "Kopetdag". Behind him coaching work in the Turkish "Genclerbirligi", the Kazakh "Kairat", the Russian "Rostov" and other football clubs in Russia, Turkmenistan and Kazakhstan.


The national Turkmen cuisine has common roots with the culinary traditions of Tajiks and Uzbeks. Lamb, game and chicken dishes are very popular here. Plov is the main dish of Turkmen cuisine. It is prepared from pheasant meat, with the addition of green rice, carrots, apricots and sesame oil. Pilaf is served with pomegranate and sour plum sauce.

A special and expensive gift from Turkmenistan can be a knotted carpet made of silk or woolen threads. Turkmen skullcap and telpek - a hat made of sheep's skin, as well as silver jewelry and figurines of Akhal-Teke horses will be good gifts. Akhal-Teke horses are the pride of the Turkmens, they are a special, the oldest of the cultural breeds of riding horses, bred on the territory of Akhal-Teke five thousand years ago.


Avaza on the Caspian coast is considered a popular tourist complex seas. It is a national tourist zone with hotels, restaurants, entertainment centers, fitness clubs.

Turkmenistan is rich in historical and cultural monuments. Once in this country, you should definitely see the ruins of the ancient cities of Merv and Amul. Almost every city in Turkmenistan has amazing sights - ancient forts, fortresses. In Ashgabat, the Carpet Museum is very interesting, which, thanks to its rare, hand-woven exhibits, is known far beyond the borders of the country. And a few kilometers from the city, archaeologists discovered the remains of the capital of the ancient Parthian kingdom, which was called Nisa.

There are a lot of holidays in the country. Along with religious and official events, rather unusual ones are also celebrated here, including the Turkmen Horse Day, Turkmen Melon Day, Turkmen Carpet Day.