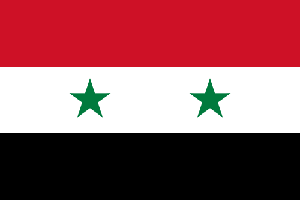 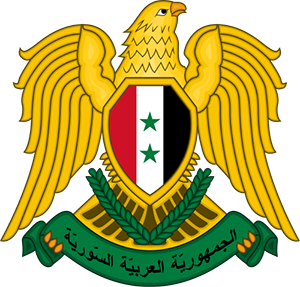 The coat of arms of Syria is a golden “hawk of the Quraish”, looking to the left, having a shield on the chest in the colors of the national flag - red, white and black vertical stripes with two green five-pointed stars in the middle. In its paws, the hawk holds a green scroll on which the name of the state is written in Arabic: On the tail are two diverging green ears of wheat.
Falcons and hawks are favorite birds of the Arabs and are regarded as status symbols. It is believed that the hawk was a symbol of the Quraysh tribe, to which the prophet Muhammad belonged. The colors of the flag are pan-Arab: green symbolizes the Fatimid dynasty, white for the Umayyads, black for the Abbasids and red for the Hashemites. In addition, the red color symbolizes the struggle against the colonial regime, the white symbolizes the “bloodless” revolution, the black symbolizes the end of the oppression of the British colonial regime.

Applying for a visa to Syria

Russians need a visa to Syria. It is issued through the embassy of the republic, located in Moscow, or directly at the border point.
The residence permit in Syria is valid for two weeks. Then you need to leave the country.
If you need to extend your stay, you need to contact the immigration service, whose head office is located in Damascus. You do not need to pay for a visa extension. For foreign citizens, the period of Syrian stay can be extended by three months.
If the request is made by a young unmarried woman who is not accompanied by a male relative, she will most likely be denied. Those foreigners who have Israeli stamps in their passports will not receive a visa.

How to get to Syria from Russia on your own

Moscow and Damascus are connected by regular flights of Aeroflot (on Thursdays and Sundays from Sheremetyevo-2) and Syrian Airlines (on Tuesdays and Saturdays from Vnukovo).
Almost all European air carriers also fly to the country. There is a fee of 200 SYP when departing from the country, from which children under the age of 10 and transit passengers are exempt.
Flights to Damascus from Almaty, Kyiv and Minsk are operated by Turkish Airlines.
News
ПУБЛИКАЦИИ

On the Syrian land, civilization originated in the 4th millennium BC, but the modern state is just over 70 years old.

Syria has common borders with Israel, Lebanon, Jordan, Turkey and Iraq. The waves of the warm Mediterranean Sea lap at its shores. The Ansaria Ridge divides the country into a green western part and an arid eastern part. The highest mountain is Nabi Yunis, which has "grown" up to 1575 meters. The two most famous rivers of the ancient world, the Euphrates and the Tigris, flow through the Syrian land.

In the western part of the country, a subtropical Mediterranean climate prevails, in the interior - arid continental. The average temperature in winter is +7°C, in summer +26°C. The amount of precipitation does not exceed 100 millimeters per year.

The flora of the country is represented by plane trees, beeches, cedars, cypresses and other plants. Aleppo pine is a unique tree - it grows in the Mediterranean, and even then not everywhere. The local fauna is not rich. Here you can meet hyena and antelope, wild boar and jackal, as well as the Syrian brown bear. Storks winter here, flying to their second home from distant lands.

In ancient times, the Hyksos, Hittites, Egyptians, Armenians, Arameans, Assyrians, Babylonians, Persians, Macedonians, and Romans ruled Syrian lands. The Canaanite tribes built their cities here, the nomadic Semites, the Phoenicians and the Philistines settled here. Damascus, the capital of the country, is considered to be one of the oldest cities in the world.

Interesting fact: < /b> The Arab historian Ibn Asakira, who lived in the 12th century, was sure that the first city wall built after the flood was Damascus. He attributed the creation of the city to the 4th millennium BC.


It was in Syria, on the road to Damascus, that the persecutor of Christians Saul believed  into the Son of God, later becoming the apostle Paul. And the followers of Jesus Christ, who lived in Syrian Antioch, were the first to call themselves Christians.

At the beginning of the 7th century, Islam came to these lands, and in 661 Damascus became the capital of the Arab Caliphate for almost a hundred years. In the XII century, the crusaders, after a series of successful conquests, create several states in Syria, which, however, fell under the invasion of the Mamluk empire, having not existed even for hundreds of years. In 1400, Tamerlane came to Syrian land, ruining and destroying Damascus.
Since 1517, Syria became part of the Ottoman Empire for four centuries. In 1922, after the First World War, which led to the collapse of the Ottoman port, the province of Syria came under the mandate of the League of Nations under the control of France, and four years later the territory was divided into Lebanon and Syria. The country received its long-awaited independence on September 27, 1941.

The main population of the state are Syrian Arabs (including Palestinian refugees) - they make up almost 90% of the population. About 9% are Kurds. There are also Syrian Turkmens, Circassians, the Kazakh tribe Sirgeli, diasporas of Armenians and Assyrians. Under the 2012 Constitution, Syria is a secular state. The locals profess different trends of Islam, Christianity and Zoroastrianism.

One of the first forms of writing, Ugaritic cuneiform, was born in Syria as early as the 15th century BC. The ancient Syrians - the scientist Antiochus of Ascalon, the historian Michael the Syrian, the theologian John Chrysostom and many others - contributed to the development of the great culture of the Hellenes, Romans and Byzantines. The commander Osama ibn Munkiz lived on Syrian soil, he created the "Book of Edification", which is recognized as a valuable source telling about the Crusades.

The capital of Syria, Damascus, has been famous for its blades for many centuries. And until now, the phrase "Damascus steel" sounds like a compliment to the master, talking about the highest quality of a dagger or saber.

Interesting Fact: Among the six Syrian sites on the UNESCO World Heritage List is the Old City of Bostra, which is mentioned in written sources from the time of Pharaoh Thutmose III (15th century BC). The archaeological sites of one of the most beautiful ancient cities - Palmyra, as well as the castle of the Sultan of Egypt and Syria, Salah ad-Din, are also known to the world.


In 1950, compulsory primary education was introduced in the country - it's free. There are four universities in the country, the oldest of which is the University of Damascus founded in 1903. Syrian youth also come to study at Russian universities.

The country has free state healthcare and paid private healthcare. There are almost 300 hospitals here, but there are not enough specialists. According to statistics, there are about 900 inhabitants per doctor.

Syrian athletes have been participating in the Olympic Games since 1948.  So far, they have three medals, and the only gold medal was won in 1996 by the athlete Gada Shuaa. Football, boxing and volleyball are popular in Syria.

On the traditional Syrian table there will always be shawarma, pea homomos, eggplant mutabbal paste and  fattoush - a salad of vegetables, olives, fried bread. In the diet of local residents there is always cheese, meat pilaf with carrots and spices, & nbsp; grilled fish.

There are a lot of sights in Syria . Already Damascus itself, in which eras and peoples are intertwined, is a huge attraction: the Old City, the chapel of St. Ananias, Bishop of Damascus, the mosque of the Umayyad dynasty era, built at the beginning of the 19th century, in the treasury of which lies the head of John the Baptist, revered in the Islamic world as a prophet Yahya.

Interesting fact: a few kilometers from Damascus on the southern slope of Jebel Qasiyun is the cave of the First Blood - Magarat ad-Damm. According to legend, it was here that Cain killed his brother Abel.


Of the places significant for world culture in Syria, there are the ancient citadel of Aleppo, and Tekkiya Suleimaniya - a complex of a dervish monastery, and the monastery of St. Thekla . A true fan of archeology and history in Syria is waiting for the ruins of the ancient Aramaic temple of Ain Dara, the Phoenician city of Amrita, the ancient Dura-Europos and Philippopolis, as well as the same Palmyra, which for a long time was the main rival of Rome in the East.

Syria, along with religious Muslim and Christian holidays, memorable dates and secular holidays are celebrated. New Year's Day falls on January 1st, Mother's Day on March 21st, Independence Day on April 17th and Labor Day on May 1st. May 6 is the Day of the Martyrs - in memory of the execution of six Syrian and Lebanese nationalists by the Turkish authorities in 1916, and October 6 is the Day of the October War (the fourth Arab-Israeli war of 1973).