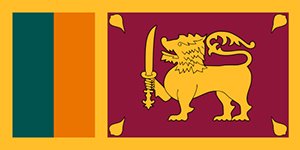 The flag of Sri Lanka was adopted in 1948. Since then, its appearance has undergone only minor changes.
After Sri Lanka gained independence in 1948 under the name of Ceylon, the ancient flag of the Kingdom of Kandy was adopted, which was a red field with a golden lion clutching a saber in its paw (“Singhalese lion "). The lion represents the progenitor of the Ceylons. In 1951, green and orange stripes were added to the flag, symbolizing the Muslim and Hindu minorities respectively, with a red field representing the Buddhist majority. In 1972, when the country was renamed Sri Lanka, four leaves of the sacred Buddhist paipul (fig) tree were added to the corners of the red field. The leaves symbolize love, compassion, mutual understanding and self-control. This version of the flag became official in 1978. 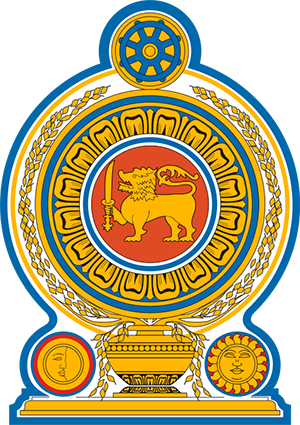 The coat of arms of Sri Lanka represents a golden walking lion with its right forepaw raised (the Sinhala lion) holding a sword in its right forepaw (the same lion on the flag of Sri Lanka) in the center, and was adopted in its present form in 1952.
Before gaining independence, Sri Lanka (then known as Ceylon) used the coat of arms of Great Britain as a national emblem. When Sri Lanka gained independence from the British in 1948, there was a need for a national coat of arms. A special committee was convened. According to his recommendation, in 1952 a new national emblem was adopted: everything remained as before, only the crown was replaced with the Wheel of Dharma (displaying in symbolic form that Sri Lanka was the kingdom of the Commonwealth of Nations).
When in 1972 Sri Lanka became a republic, the crown was removed and replaced by the current coat of arms, while, however, it was decided to abandon the elements of socialist heraldry (such as corn cobs and cogwheels). Two circles symbolize day and night (the proximity of Sri Lanka to the equator), and in the middle there is a Buddhist bowl, as a symbol of the island's territory's involvement in his teachings.

Applying for a visa to Sri Lanka

To visit the Republic of Sri Lanka, Russians need an ETA electronic visa, which can be obtained in several ways online via the Internet:
1.Upon arrival at the international airport of the capital;
2.At the representation of Sri Lanka located in Moscow;
3. Through travel agencies when buying a ticket.

How to get to Sri Lanka from Russia on your own

Blessed Land of the Lion People

Until 1972, this South Asian island nation was known as Ceylon. The modern name of Sri Lanka is translated from Sanskrit as "Blessed Land".

Interesting fact: The old name of the island is Ceylon. The word was born as a result of repeated distortion of the original "sinhal" (from Sanskrit - "lion"). In ancient times, Sinhalese, Indo-Aryan settlers, came to these lands. They called the island Sinhala Dwipa - Lion Island. Arab merchants pronounced it differently - "serendib", such an island is also in the fairy tales "A Thousand and One Nights". In the 16th century, the Portuguese, who sailed here on ships, turned Sinhal into Seilao, then the Dutch changed this word into Zeylan, and then the British changed it to Ceylon.


Off the coast of the island of Sri Lanka splash the warm waters of the Indian Ocean, here are the Bays of Bengal and Mannar. In the Strait of Polk there is a shallow Adam's bridge, which once connected Sri Lanka with the Hindustan peninsula, but was destroyed by an earthquake in 1481.

The main part of the territory of Sri Lanka is occupied by coastal plains, and mountains rise in the center. The highest peak is Mount Pidurutalagala (2524 meters), but climbing Mount Adam's Peak (2243 meters) is very popular among tourists and pilgrims. At this peak is a small depression, about 1.5 meters long and about 70 centimeters wide, shaped like a human foot.

An interesting fact: Buddhists are sure that the depression on Adam's Peak is the footprint of the Buddha's foot, Hindus claim that the foot of the god Vishnu touched the mountain, and Muslims - that it is footprint of the first man Adam. And together they say that the water that accumulates in this depression can cure all diseases.


Sri Lanka is located in the subequatorial monsoon climate zone, and there is a very diverse vegetation - about 3000 species, with an incredible number of medicinal herbs, orchids and ferns.

The local fauna is represented by more than 80 species of animals. Deer and wild boars, buffaloes and bears, elephants and porcupines roam here, monkeys jump, crocodiles lie in wait for prey. Bright butterflies flutter over the flowers, of which there are 240 species, and a great variety of different birds fly.

The first inhabitants of Sri Lanka were the ancient tribes of the Veddas. In the 6th century BC, they were pushed inland by the Sinhalese who arrived from northern India. By the year 300, the first Sinhalese kingdoms arose here.

In 1506, the ship of the Portuguese Lawrence de Almeida landed on the island, who founded the first trading post here in the area of the modern city of Colombo. During the 16th century, the Portuguese occupied the coast of Ceylon without succeeding in subjugating the hinterland. A hundred years later, they were replaced by the Dutch, who also could not overcome the resistance of the Sinhalese. In 1795, the British landed on the shores of Ceylon, declaring it a dependent territory a few years later. In 1815, they conquered the last kingdom of the Sinhalese, whose capital was the city of Kandy.

In 1948, the island nation gained independence and was named the Dominion of Ceylon. In 1972, it was renamed Sri Lanka, ceased to be a dominion, but was still part of the Commonwealth of Nations, like almost all former colonies, dominions and protectorates of Great Britain.

More than 70% of the country's inhabitants are Sinhalese, slightly over 11% are Tamils. The island is inhabited by Larakalla - Sri Lankan Moors, descendants of Arabs, as well as burghers descended from mixed marriages with Europeans, and Veddas - the heirs of the ancient population of the island.

In the 3rd century BC, Buddhism came to the island, which is still still remains the religion of the local majority - it is practiced by more than 70% of the population. Adherents of Hinduism in Sri Lanka are about 13%, Muslims over 9%, Christians almost 8%.

The country has six historical and two natural sites included in the UNESCO World Heritage List. Among them is the city of Polonnaruwa, the medieval capital of the Sinhalese kingdom, in which the stone temple of Gal Vihara is located with four colossal Buddha statues carved in granite rock. The list of the most valuable objects of human culture includes the golden cave Buddhist temple of Dambulla, created in the 1st century BC. Polonnaruwa and Dambulla are truly masterpieces of human genius.

The country has a very high percentage of literate people - 92% of men and 89% of women. Among Asian countries, Sri Lanka ranks second in terms of education. Here, along with public schools, there are private ones. Higher education is represented by 16 universities, including the universities of Colombo, Peradenia, Kelaniya, Buddhasrawaka Bhikshu and Buddhist-Pali. Higher education in the country is free, but the competition is always big and there are not enough places for everyone.

Sri Lanka's healthcare system, represented by public and private clinics, is second only to Japan and Singapore in terms of the level and quality of services. If necessary, emergency care to a foreigner will always be provided free of charge, but all subsequent visits to the doctor, including in a public hospital, will have to be paid. The Centers of Traditional Medicine, where Ayurvedic practices are used, deserve special attention.

For the first time, Sri Lankan athletes took part in the Summer Olympic Games in 1948, performing as the national team of the Dominion of Ceylon. Popular sports in the country are football, volleyball and field hockey.

Sri Lankan dishes are based on rice, lentils, vegetables, seafood, pork or chicken meat and lots and lots of hot spices. Here you should try fish curry with a side dish of rice or potatoes, as well as tuna in sweet and sour sauce. For a quick snack, samosa is a good choice - a triangular fried pie stuffed with meat or vegetables.

A great gift from Sri Lanka would be real tea, of which there are a lot of varieties and types. But few people know that, in addition to tea, the country is famous for precious and semi-precious stones: blue and yellow sapphires, amethysts, garnets and many others. It is better to buy jewelry from them in small certified stores, where the prices are reasonable and the quality is decent.

In Sri Lanka, it is very easy to combine a relaxing beach holiday with exploring local attractions. At the same time, you can equally well stay at the Galle Face Hotel in Colombo, where Yuri Gagarin and Richard Nixon used to stay, or rent a room from local residents, which will be many times cheaper.

Sightseeing usually begins from the Golden Temple in the city of Dambulla, visiting the ancient cities of Polonnaruwa and Anuradhapura (the first capital of Sri Lanka), as well as the Sigiriya plateau in the very center of the island, which rises 170 meters above the surrounding plain. The name of the plateau is translated as "lion rock". Here, in the 5th century, King Kassapa erected a fortress and his halls. Stone steps still lead to the top of the plateau, carved between the paws of a lion, but the entrance to the citadel - the gaping lion's mouth - has not been preserved. In the mirror hall of the palace, which was once completely lined with porcelain, huge colorful frescoes have survived.

The main state holiday of Sri Lanka is Independence Day - February 4th. All religious holidays of all confessions represented on the island are celebrated here. Non-working and public holidays are the days of the full moon, when the inhabitants of the country devote themselves to the process of meditation.