Republic of Korea – information about the country, history, sights, visa 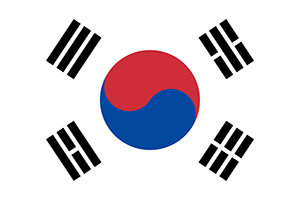 The national flag of Korea, officially Taegukgi (Korean: 태극기), is the official state symbol of Korea.
The modern flag of the Republic of Korea was adopted in 1948. It is a variation on the taegukgi flag (Korean 태극기, flag of the Great Beginnings), the national flag of Joseon (from 1883 to 1897) and the Korean Empire (from 1897 to 1910), which was also used by the Provisional Government of the Republic of Korea (from 1919 to 1948). The original taegukgi was invented in 1882 by Emperor Gojong (Korean 고종)[1].
White is the national color of Korea. The central emblem reflects the views of the Universe as a whole (Taoism); in this figure, two opposite energies "yin" and "yang" unite and interact (yin corresponds to the element of blue, and yang to red). Yin and yang are the Great Beginnings, in Korean “taeguk” (Korean 태극), so the flag was called “Taegukki”, the flag of the Great Beginnings (Korean 태극기). At the corners are trigrams, which also consist of "yin" (torn stripes) and "yang" (solid stripes). Trigrams mean  (clockwise from the top of the shaft): Sky, south, summer and air; moon, west, autumn and water; Earth, north, winter and land; Sun, east, spring and fire. Black color means vigilance, steadfastness, justice and chastity. 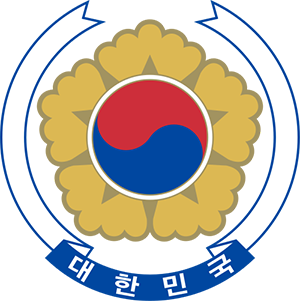 The emblem of South Korea was approved in 1963.
It consists of a traditional Korean character that also appears on the national flag, surrounded by five stylized petals and a ribbon that reads "Republic of Korea" (대한민국), the country's official Hangul name. Yin and Yang represent peace and harmony. These five petals are significant and are associated with Korea's national flower (Hibiscus syriacus or Rose of Sharon).

Applying for a visa to South Korea

When visiting the country for a period of 60 days, a visa for citizens of the Russian Federation is not needed.

How to get to South Korea from Russia on your own

You can fly directly from Russia to Seoul from Moscow, St. Petersburg and Irkutsk, using flights and Korean Air. Aeroflot also flies from Moscow. Residents of Khabarovsk and Vladivostok can use the services of the Asiana air carrier.
News
ПУБЛИКАЦИИ

South Korea, in ancient times - Joseon or, in translation, the Land of Morning Calm - all these are the names of one state - the Republic of Korea. It was created by the ancestors of modern Koreans in the 7th century BC.

The state occupies the southern part of the Korean peninsula and about 3,000 offshore islands. The largest of them is Jeju. The country is located in East Asia. On three sides, its coastline is washed by the Yellow, Japan and East China seas.

Almost 70% of the territory is occupied by mountains. The highest point is located on the island of Jeju - an extinct volcano Hallasan (1950 meters).

The country is located in the zone of temperate monsoon and subtropical monsoon climate. As a rule, the winter here is quite dry, the temperature depends on the area and can drop to -4-25°C. In summer it is warm here, up to +27°C.

In the 7th century BC, a single state was formed on the territory of the Korean Peninsula and the southern part of modern Manchuria, which is now called Ancient Joseon. The Joseon Dynasty lasted 500 years. In the II century, the country was conquered by the troops of the Celestial Empire, which was ruled by the Yan dynasty. In the 10th century, a new state was formed on the Korean Peninsula - the Koryo Empire, which lasted until the middle of the 13th century. In 1259, the Korean peninsula was completely captured by the Mongol Empire.

Interesting fact: In 1237, during the era of the Goryeo Dynasty, an anthology of the teachings of the great monks on attaining the spirit of the Buddha through the practice of Son Paegong-hwasan was printed. It became the world's first book printed using a metal matrix.


In 1392, Lee Songye came to power in the country, becoming the emperor of the Korean state, which was again called Joseon. In the first decade of the 20th century, Korea was conquered by Japan, whose dominance lasted until the end of World War II.

In 1945, during the Potsdam Conference, the leaders of the USSR, Great Britain and the United States, Stalin, Churchill and Truman decided to divide the Korean Peninsula into two parts. The northern one passed under the temporary control of the Soviet Union, the southern - under the control of the United States. Three years later, the division was legally formalized and the Democratic People's Republic of Korea in the north and the Republic of Korea in the south appeared on the world map. In 1950, an armed conflict broke out between them, which ended three years later, but once divided the once united Korean people.

Modern South Korea is called the "economic tiger".  From poor and hungry, not having large reserves of minerals, over the past 60 years it has become a country with one of the strongest economies.  The South Korean LG Group, which produces electronics, chemical products and telecommunications equipment, Samsung Electronics is a leader in the field of electronics, Hyundai Heavy Industries is a giant in shipbuilding and heavy equipment production.

More than 90% of the local population are indigenous the inhabitants of the region are Koreans. Their traditional religion is Buddhism, which was heavily influenced by Confucianism (during the Ancient Joseon period) and shamanism. In the 18th century, Christianity came to the country, and now there are more professing this religion - Catholics and Protestants - than Buddhists. Christians in South Korea are almost 30%, and Buddhists - 22%.

Primary and secondary education in the country is represented by free public and paid private schools. Higher education can also be obtained at public or private universities. Among the best are Seoul National University and the Korea Leading Institute of Science and Technology.

Since 1948, the country has been participating in the Summer Olympic Games, and since 1952 in the Winter Olympics. South Korean athletes are strong in archery and short track speed skating. Twice South Korea won the right to host the Olympic Games. In 1988, the capital, Seoul, hosted the Summer Olympics, and in 2018, Pyeongchang will host the Winter Olympics.
In addition to the traditional Korean martial arts of taekwondo and hapkido, many European and American sports are popular in the country. Among them are baseball, golf, football, diving and mountaineering. South Korea is considered the world center of e-sports.

The country's medicine is built on the American principle, when about 90% of all medical institutions are private. The level of medical care here is one of the best in the world. The combination of modern technology and traditional medicine makes the country attractive in the field of medical tourism, a popular area of which is plastic surgery.

Interesting fact: In terms of the number of plastic surgeries per capita, South Korea has long surpassed the United States. Eye augmentation is the most common operation among locals.


A staple of Korean cuisine is rice served with kimchi (spicy sauerkraut) or hwe (raw fish pieces in vinegar). with hot red peppers, carrots and garlic). Dishes from dog meat are a thing of the past, young people adhere to European traditions, according to which a dog is still a friend of man.

And as a memory or a gift from the country, you can take porcelain and ginseng. It is better to buy household appliances in Seoul or Busan, in duty-free shops Tax free shopping.

You can travel around the country by trains and buses. Subways operate in Seoul, Daegu, Busan and Incheon. City taxis are equipped with digital simultaneous translators. You can rent a car, but keep in mind that traffic jams in South Korean cities are common.

Sightseeing can start from the capital of the country, which used to be called Hanyang, and since 1945 became known as Seoul. The capital experience of the city is great - from the time of the Joseon Empire, from the 14th century. Looking around the historical part of the city, it is worth visiting Gyeongbok-kun Palace, which was the first palace of the Joseon Dynasty. Now you can see the exhibits of the National Folklore Museum and the Museum of Royal Relics.

The ancient South Korean city of Gyeongju is included in the UNESCO World Heritage List. Here is the oldest surviving observatory in the world - Cheomseongdae (647).

Another ancient city is located on the western coast of the country - the largest port of Incheon, known in world history as the neutral port of Chemulpo. Here in 1904, on the outer roadstead, the Russian cruiser Varyag and the gunboat Koreyets, under the general command of Captain Vsevolod Rudnev, fought a Japanese squadron of 14 ships.

One of the largest resort centers in South Korea is the city of Gangneung, famous for its long stretch of beaches and festivals - the Youth Arts Festival, the rock show and, of course, the Intangible Cultural Heritage-listed Tano - only here you can see the Kwanno mask dance. The city is twinned with Russian Irkutsk.

South Korea is also visited by lovers of mountain skiing and snowboarding. The main ski tourist center of the country is the province of Gangwon-do. Here is the best winter resort - Yongpyeong, which has 31 pistes of different difficulty levels.

There are very few holiday weekends in South Korea. There are three days off only during the Korean New Year and on Harvest and Ancestral Remembrance Day. Both holidays are calculated according to the lunar calendar. Public holidays include Korean Declaration of Independence Day on March 1, Constitution Day on July 17, and Founding Day on October 3.