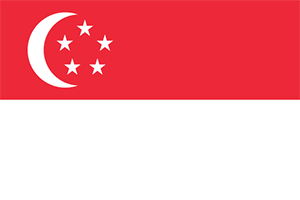 Flag of Singapore  It was first approved in 1959, when Singapore was part of the British Empire.
The flag consists of two equal horizontal stripes: a red stripe above and a white stripe below. The red color personifies the universal brotherhood and equality of people, and the white color symbolizes purity and virtue.
In the upper left corner there is a white crescent, next to which there are five stars forming a circle. The crescent symbolizes a young, growing nation, and the five stars represent the ideals of Singapore: democracy, peace, progress, justice and equality. 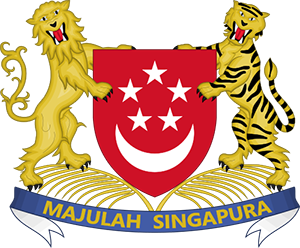 The coat of arms of Singapore was adopted in 1959 when Singapore gained self-government within the British Empire.
The new moon symbolizes a young nation on the rise, and the five white stars reflect various national ideas, including multiculturalism. The coat of arms is supported by a rising lion and a tiger on the alert, symbolizing Singapore itself and & nbsp; Malaysia, which he previously belonged to respectively. Below them is a blue ribbon with a golden inscription Majulah Singapura, which means "Go Singapore!" in Malay.

Applying for a visa to Singapore

To visit the country for a period of 96 hours (4 days), a visa for citizens of the Russian Federation is not required.

How to get to Singapore from Russia on your own

From Moscow to Singapore you can get a direct flight by Singapore airlines, but the cost of a direct flight is prohibitive.
Cheaper can be reached by a flight with a change in Sri Lanka, Qatar, the United Arab Emirates and other countries. It is also quite profitable to fly via Bangkok or Kuala Lumpur using the services of the budget carrier Air Asia.
News
ПУБЛИКАЦИИ

Garden city on the islands

The name of this city-state can literally be translated from Sanskrit as “Lion City”: sinha means “lion”, and pura means “city”. With a prime location in the islands of Southeast Asia near the southern tip of the Malay Peninsula, Singapore is the busiest port in the world.

Interesting fact: Once, walking around the island of Tumasiku, the first Malay king Sang Nila Utama (XIV century) saw an unusual animal. None of the courtiers knew what it was called, and only a visiting sage recognized it as a lion. So the island was named the Lion City - Singapore. The symbol of Singapore is the mythical merlion, an animal with the head of a lion and the body of a fish. Local legends say that in ancient times the merlion protected the island from the elements. It is noteworthy that the same creature is depicted on the walls of temples in the Indian monastery complex of Ajanta and in the city of Mathura, on ancient Etruscan coins, on the coats of arms of the English county of Norfolk and the capital of the Philippines - Manila.


The city-state is located on 63 islands, including artificially created ones. Singapore's closest neighbors are Malaysia and Indonesia, with which, in addition to sea communication, land communication has also been established - through the built dam-bridges.

Interesting fact: Singapore buys land and stones from other states to create new islands. The land reclamation program has been in place since the 1960s, during which time the area of Singapore increased from 581.5 km2 to almost 720 km2 by 2017, and the city continues to grow.


Singapore located in the equatorial climate zone. Rains are frequent here, on average, up to 250 millimeters of precipitation falls per month. The average annual temperature ranges from +25 to +32 degrees Celsius.

Until the 1960s, equatorial forests covered the entire territory of this island nation, but now they remain only in the north and northwest. The largest zone became the Bukit Timah Natural Reserve. More than 800 species of trees, lianas and flowers grow here, long-tailed macaques, lemurs, reticulated pythons, drongo birds and white-bellied sea eagles live here. Another untouched natural area is Sungey-Buloh Park, where migratory birds winter.

The first mention of Tumasik Island is found in Chinese sources of the 3rd century. At that time, it was part of the ancient Malay kingdom of Srivijaya. In the XV-XVI centuries, Singapore was part of the Malaysian Sultanate of Johor. In the 19th century, the island became a British colony and a large trading zone, the population of which was replenished by migrants from China. During the Second World War, the British were forced to surrender Singapore to the Japanese troops, who remained there until the surrender of Japan in 1945. In 1963, Singapore became part of the Federation of Malaysia, but two years later, on August 9, 1965, it declared its independence.

An interesting fact: In 1959-1990, Lee Kuan Yew, a lawyer who graduated from Cambridge University, was the Prime Minister of Singapore. With harsh measures, he was able to overcome corruption and generally restore order - both in society and on the streets. It was under him that poor Singapore, which does not have any minerals, made a powerful economic breakthrough. Now, in terms of living standards, it ranks second in Southeast Asia, second only to Japan.


In terms of population density, the state of Singapore ranks second in the world, second only to the European Principality of Monaco. Here, 8169 people live on one square kilometer - this is the data of 2017.

Almost 77% of local residents are Chinese; Malays make up about 14%; immigrants from India - Tamils, Punjabis, Bengalis and Malayali - about 8%. English, Arabs, Armenians, Jews, Thais and Japanese also live in Singapore.

Buddhism, Islam, Christianity, Taoism, Confucianism and even animism, a belief in the animation of nature, coexist peacefully in the country.

The city is decorated with many sculptures, including the very original "Newton" by Salvador Dali, the fat "Bird" by Colombian Fernando Botero, Israeli David Gerstein's "Moment" with a lot of bright little men, the serious "Attacking Black Bull" by Italian Anna Spellini.

Singapore's public education system is recognized as one of the best in the world. The city-state has a literacy rate of 99.9%. Teaching in schools and universities is conducted only in English. There are six institutions of higher education in the country, including the National University of Singapore.

Interesting fact: Singapore has a strict system of fines. Retribution will overtake both those who smoked in the wrong place, and those who did not flush after themselves in a public toilet. Serious offenses are punished very harshly - for the transport of drugs, for example, the death penalty is threatened here.


The country's medicine is recognized as one of the best in the world. Public and private medical institutions operate here. Assistance in free medical facilities is available only to citizens of Singapore and those who have a residence permit. Tourists should stock up on international standard medical insurance.

Over the past decades, Singapore has become a popular destination for medical tourism. Many come here for plastic surgery. Local doctors are making progress in the treatment of cancer, epilepsy, cerebral palsy.

Since 1948, Singaporean athletes have been participating in the Summer Olympic Games. Since 2008, the country has hosted the Formula 1 night round. And in 2010, the first Youth Olympic Games were held here. Football is one of the most popular sports in the country.

Every summer, in July, Singapore hosts a food festival where tourists can get acquainted with the local cuisine, which is very diverse, and taste culinary delights prepared by the best chefs national restaurants. One of the popular local dishes is laksa, a spicy soup with noodles, shrimp, shellfish, fish or other seafood. Here you can try grilled stingray or crab in tomato sauce with hot cayenne pepper.

Shopping is a real local entertainment, especially during the Big Singapore Sale, which lasts from the last week of May to early July. Shopping can be done in huge shopping centers, ethnic street markets, and special shops.

You can move around the city both by metro, buses and taxis.

Among the attractions of Singapore - Marina Bay Sands hotel-casino with a unique swimming pool and tropical Sands Sky Park, which are located on the roof, at a height of 200 meters. The 165-meter Singapore Flyer is the second largest in the world, second only to the High Roller in Las Vegas. Another "visiting card" of Singapore is the tropical park Gardens by the Bay.

Singapore is a multicultural country. The Chinese New Year, Hari Raya Haji (the end of the Hajj), and Christmas, and Vesak, the birthday of Buddha, and many others are equally magnificently celebrated here.