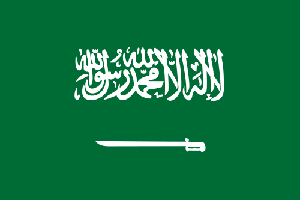 The flag of Saudi Arabia is a rectangular green panel, with a silver script shahada (Muslim creed), under which there is a silver sword.
The inscription in Arabic worship, except for the One and only God, and Muhammad is His messenger.”
The flag is sewn from two identical panels. This is done so that the inscription is readable on both sides,
The sword symbolizes the victories of the founder of the country - Abdelaziz Ibn Saud. 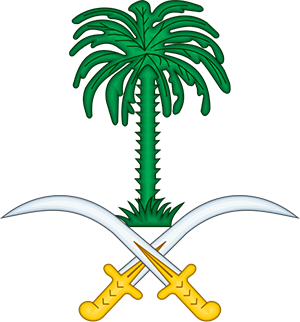 The emblem of Saudi Arabia consists of two swords and a palm tree.
The palm tree symbolizes the main tree of Saudi Arabia.
The swords symbolize the two clans that founded modern Saudi Arabia: the Al Saud clan and the Al Sheikh clan.

Applying for a visa to Saudi Arabia

How to get to Saudi Arabia from Russia on your own

There are no direct flights to Saudi Arabia from Russia. You can get there in transit, with transfers in other countries. For example, Royal Jordanian (to Jeddah, via Amman) or Turkish Airlines (via Istanbul).
News
ПУБЛИКАЦИИ

Birthplace of the Prophet Muhammad

Saudi Arabia is a kingdom in Southwest Asia, it is one of the world leaders in oil production.

The vast territory of the kingdom is occupied by a desert plateau, from the west it is bordered by the ridge of El Hijas (Barrier). The highest point of the country is also located here - Jabal al-Lawz (Almond Mountain), whose height is 2400 meters.

In the north and in the central part of Saudi Arabia there are deserts - rocky El-Hamad and sandy Big and Small Nefud. Almost the entire southern and eastern part of the territory is covered by the sands of Rub al-Khali, or the Great Arabian Desert, one of the largest, hottest and driest in the world.

Two climatic zones divide Saudi Arabia into a subtropical northern zone and a tropical southern one. . Snow here happens only in the mountains, and even then not every year. In winter, the temperature, depending on the area, can range from +20 to +30 degrees, and in summer it can reach +50. In the central desert regions of the country, the temperature at night can drop to 0 degrees.

The local flora is not rich. Camel thorn and saxaul grow in the deserts, along the banks of rare rivers - poplar and acacia. In rare oases, local residents cultivate grains and vegetables, plant small gardens of date and banana palms, citrus trees.

Among the mammals in the poor areas of the country, there are caracal (steppe lynx), jackal, antelope, gazelle. There are many rodents and reptiles, including poisonous snakes. In the south of the kingdom, in the Asir National Park, endangered species of animals live under the protection of the state: oryx (oryx, or saber-horned antelope) and the Nubian mountain goat. The hills of the protected area are covered with natural forests, there are beautiful rocky mountains and deep canyons. Rocky rabbits and macaques jump among the rocky slopes, wolves and red foxes run, leopards gently sneak. Wild herbs and apricot trees bloom here in spring.

Interesting fact: < b>According to Mesopotamian historical sources, the ancestors of modern Arabs separated from other Semitic tribes - Jews and Assyrians - in the 1st millennium BC. According to one version, the Arabs are the descendants of Ismail (biblical Ishmael), the son of the prophet Ibrahim (biblical Abraham), according to another, they descend from Noktan, the grandson of the prophet Nuh (biblical Noah).

In the 1st millennium BC in the south of the Arabian Peninsula, there were two ancient kingdoms - Minean and Sabaean. The creation of the most ancient Arab oasis cities - Mecca and Yathrib (modern Medina) in the Hijaz region belongs to the same period. It is Mecca that is the small homeland of the prophet Muhammad, revered in Islam.

Interesting fact: The last prophet and messenger of Allah Muhammad was born on April 22, 571 in Mecca and died on June 8, 632 in Medina. At about the age of 40, on the Night of Power (Holy month of Ramadan), Muhammad received the first revelation from the angel Jabrail, which served as the beginning of the Koran (Edification). To convey the will of Allah, the Prophet Muhammad took 22 years - from 610 to 632.


Medina became the capital of the Arab Caliphate in 632. Two years later, the Jews were expelled from here, as well as from Mecca. These cities, considered sacred by Muslims, are still closed to adherents of other religions and to tourists in general.

In the 16th century, Arabia became part of the Ottoman Empire. In 1744, the Saud dynasty established the First Saudi State. It fell after 73 years as a result of another Turkish invasion. However, after 4 years, the Second Saudi State was created with its capital in Riyadh, which lasted 67 years and was destroyed by the Rashidi dynasty. After 11 years, the young Abdulaziz from the former dynasty, the Saudis, captured Riyadh. The troops of the Ottoman Porte, who rushed to the aid of the Rashidi family, were defeated. The final unification of the country into the kingdom of Saudi Arabia took place in September 1932.

Interesting fact: < /b> The founder of Saudi Arabia, King Abdulaziz (reigned 1932-1953), was an isolationist advocate. In his entire life, he left the country only three times.


Almost 90% of the inhabitants of the kingdom live in the cities of Riyadh, Jeddah, Mecca, Medina, Ed-Dammam, El -Jubail and Khafji. In the deserts, you can still meet Bedouin nomads.

The main religion of the country is Sunni Islam. Sunnis are supporters of traditional Islam, "moderate" beliefs, they oppose schismatic sects, adherents of radical, "extreme" movements - Shiites, Kharijites, Mutazilites and others. However, in the kingdom there is a religious police - muttawa. For violation of Islamic canons, punishment from a fine to beheading is threatened here.

The life of women in Saudi Arabia is strictly regulated by religious norms. They can appear in public places only when accompanied by guardians - the next of kin. The traditional dress of a Saudi woman consists of an abaya - a long, usually black dress with sleeves - and a niqab - a headdress that covers the face and leaves a slit only for the eyes. In the modern kingdom, instead of a niqab, women can wear a hijab - a headscarf that leaves the face open. Saudi Arabia has one of the strictest dress codes among Arab countries.

The kingdom's education system has more than 24,000 schools and colleges, 8 universities, the first of which was opened in the capital Riyadh in 1957 and named after King Saud. Education in the country is free, the state pays for young people and education in universities in other countries.

Saudi athletes have been participating in the Summer Olympic Games since 1972.  The national football team is one of the strongest in Asia. In 2011, Saudi women are also given the right to participate in the Olympic Games, a "chaste" sports uniform is specially developed for them.

The health care system in the kingdom is one of the best in the world. Moreover, it is free not only for citizens of the state, but also for pilgrims. To visit the country with a tourist purpose, it is worth stocking up on international health insurance. However, the first emergency aid here will always be provided free of charge.

The main products for cooking local cuisine are lamb, fish, poultry and lamb. The traditional side dish is crumbly rice with raisins. The national culinary preferences of the Saudis include dishes prepared using fermented milk products. Among them is bulgur - porridge made from wheat or corn grits with the addition of sour milk.

The most recognizable and traditional gift from Arabia will be a man's checkered handkerchief - keffiyeh. You can bring hookahs, gold jewelry, and natural oil-based Arabic perfumes from the kingdom.

You can move around the kingdom by trains, buses and planes - there are 208 airports in the country. In the cities, public transport is represented by buses and taxis.

Pilgrims wishing to visit the holy cities of Islam - Mecca and Medina - tend to get to Saudi Arabia in the first place. In Mecca, there is the sacred Masjid al-Haram - the Sacred Mosque, built in 1570. It can accommodate up to 700 thousand believers. In the center of the mosque is a sanctuary - the Kaaba, the corners of which point to the four cardinal points. During the Hajj, Mecca is experiencing an influx of more than two million pilgrims.

Medina is considered the second holy city after Mecca, there, under the Green Dome, the ashes of the prophet Muhammad rest. Al-Masjid al-Nabawi, the Mosque of the Prophet, was built here with his participation.

The largest archaeological complex in Arabia is the ancient Madain Saleh. 111 rock burials were found here, dating from the period from the 1st century BC to the 1st century AD. Madain Salih is included in the UNESCO World Heritage List.

In the capital of the kingdom of Riyadh, the citadel of the old city has been preserved, where there is a museum dedicated to King Abdulaziz. Another popular place among tourists is the Royal Center - the tallest building in the whole country. In addition to residential apartments and offices, it houses restaurants and shopping centers.

The end of Ramadan and the Feast of Sacrifice are officially celebrated in the country. They are calculated according to the Muslim lunar calendar. A holiday with a fixed date is Saudi National Day - the day of the unification of the kingdom, which is celebrated on September 23.