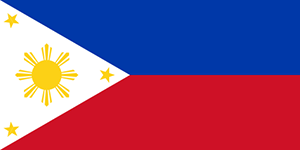 The flag was officially approved on June 12, 1898. The blue and red colors on it symbolize patriotism and courage, the white triangle symbolizes peace and purity. The golden sun in the center of the triangle has 8 rays - according to the number of provinces of the Philippines, which were the first to rise to fight with Spain. The three golden five-pointed stars represent the three island groups that make up the Philippine archipelago: Luzon, Visayas, Mindanao.

Interesting fact: The Philippines is the only country that, in case of hostilities, flips its flag on a pole, blue and red the strip is reversed. 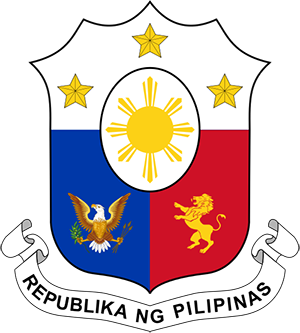 Officially, the coat of arms of the Republic of the Philippines was adopted much later than the flag - in 1940. The sun and five-pointed stars mean the same on it as on the flag. As a reminder of the colonial past, the coat of arms depicts a bald eagle as a symbol of the United States of America and a lion - a symbol of the former domination of Spain.
The inscription on the ribbon - "Republic of the Philippines" is inscribed in the Filipino language.

Applying for a visa to the Philippines

For vacations up to 30 days, Russians do not need a visa to the Philippines. If the duration of the trip is more than one month, you need to apply for a visa through the Philippine Embassy in Moscow or consulates in other cities. Russians living in the regions can send a package of documents to the embassy via express mail (FedEx, DHL).

How to get to the Philippines from Russia on your own

From Moscow to Manila you can get flights of the Philippine airline Cebu Pacific, connecting Ninoy Aquino airport in Manila with Moscow airports Domodedovo, Vnukovo, Sheremetyevo, Zhukovsky (Ramenskoye).
The two main low-cost airlines of the Philippines are AirAsia Zest and Cebu Pacific. On their flights you can travel within the country, tickets cost 20-100 US dollars.
News
ПУБЛИКАЦИИ

There are more than 7,000 islands in the Philippine archipelago, rising above the water surface of the Pacific Ocean. Because of its volcanic origin, the Philippines -  Mountain country. The average altitude is 2000 meters above sea level, and the highest mountain peak, Apo volcano, reaches 2954 meters.

Interesting fact: The Philippines is a country of ten active volcanoes, and the archipelago is part of the Pacific Ring of Fire, known for increased seismicity.

The country is part of the tropical climate zone . This means that the best time to relax here is from November to April-May, because from June to October monsoons come to the Philippines with showers and typhoons. However, the islands are always warm and humid, the average annual temperature is +27°C, and the rainfall reaches 4000 millimeters per year.

The flora and fauna of the islands can be described in one word -  endemics. About 100 species of local palms and 700 species of orchids can be found only here.

One of the amazing animals living in the Philippines is the tarsier. This big-eyed creature measuring just over 10 centimeters in size is considered sacred by the locals. According to the beliefs of the islanders, the tarsier is a favorite pet of the spirits of the forest, which means that these animals need to be taken care of and in no case offend them.

Interesting fact: The Philippine tarsier is listed in the Guinness Book of Records as the animal with the largest eyes in relation to body size.


Sea waters off the coast of the archipelago are rich in fish. Whales, dolphins and sirens are found here - rare dugong marine mammals. Philippine waters are also rich in shellfish, the most common of which are pearl oysters.

The first people came to the archipelago via land bridges from Taiwan and Borneo around 200,000 BC.
The development of local tribes was active , and long before the new era, they already   traded with sailors from Sumatra, Java, China and Japan. The ancient Filipinos sold wax, pearls, mother-of-pearl, tree resin, abaca cloth (a fiber made from textile banana leaves), betel (pepper), coconuts, and fruit. They bought glass, ceramics, weapons, paper and gold items.

By the time the Spaniards discovered the archipelago at the beginning of the 16th century, communities already existed in Luzon and the Visayas - barangays, led by leaders. And there was a Muslim sultanate on Sulu and Mindanao.

In 1521, during a round-the-world expedition, Ferdinand Magellan landed on the shores of the island of Cebu. The archipelago was named Saint Lazarus Islands. Magellan concluded an agreement with the ruler of the island of Cebu, Raja Humabon, baptized him and declared the islands Spanish. But the great navigator had the imprudence to go to war with another leader of the islanders. On Mactan Island, a Spanish detachment of 50 people was defeated, and Magellan died in a personal battle with a leader named Lapu-Lapu, whom the Filipinos consider a national hero.

Interesting fact: There is an opinion that Magellan discovered the Philippines by mistake. He was looking for the islands of spices - the modern Moluccas, but made a mistake in the calculations.


The Spaniards returned to the archipelago in 1543, and it was named after Crown Prince Philip. Events developed in the glorious tradition of the conquistadors - the conquerors confiscated wealth and forcibly baptized the population. There was also a big plus in the planting of Christianity - the creation of an education system. Since 1593, books began to be printed in Manila, and in 1611 the first, still operating, Saint Thomas University was opened.

At the beginning of the 19th century, a movement for independence began in the country. In 1896, the Spanish authorities captured and executed one of its leaders, scientist and writer José Rizal. His death was the impetus for the beginning of the revolution. The Americans used this as an excuse to intervene, in April 1898 they declared war on Spain and won it.

On a positive revolutionary wave in 1899, the Filipinos adopted the Constitution, but the joy of the people was premature. According to the Peace of Paris in 1899, Spain for 20 million dollars & nbsp; handed over the Philippines, Cuba, Guam and Puerto Rico to the United States. As a result, the Philippine-American War began in February 1899, which officially ended in 1901, and unofficially in 1913. In December 1941, the archipelago was occupied by Japan. The Philippines received its long-awaited independence on July 4, 1946.

The population of the islands is 80% made up of large and small indigenous peoples. The most numerous of them are Tagals, Hanging, Moros, Iloks. Quite large diasporas of Indians, Chinese and Malaysians live in the Philippines.

Despite the fact that the majority of Filipinos belong to one branch of Christianity or another, in the depths of the islands, faith in the spirits of ancestors and nature is strong among the locals. Taboos, totems and magical rituals are more real to them than any high technology.

Filipinos are proud of their literature, which is rich in names and genres. In English prose, these are Nestor Vincente Gonzalez, Nick Joaquin and many others. A major figure in Tagalog-language literature is the poet and short story writer Amado Vera Hernandez.


Filipino traditions to a large extent formed under the influence of Catholic Spain. Locals honor Christian religious norms, which are very successfully combined with festivals and holidays that take place here all year round. In autumn, you can become a participant in the bright festival of young wine, which takes place on the island of Negros, and visit the ethnic festival on the island of Surigano. In January, the central provinces celebrate the Ati-Atihan holiday, which is rooted in antiquity, and on Easter they always arrange a magnificent procession.

Interesting fact: The Easter procession in the Philippines is a real theatrical performance based on the gospel story of Christ's ascent to Golgotha followed by the crucifixion.


Education in the Philippines is free. The slogan "Education for All!" is still in force in local schools. (Education for all!). The country's higher education institutions are considered the best in Asia. For foreign students, the cost of studying and living on the islands will be much cheaper than in the US or Europe. In total, there are about 150 universities in the Philippines, for admission to which future students need to pass the National  Secondary  Achievement  test  (NSAT) is an analogue of the American SAT entrance exam.

The country is actively implementing the Medical Tourism Development Program, which was launched by the government in 2006. There are over 2,000 large and small hospitals and clinics in the Philippines. Treatment here is cheaper than in many countries. This comparison applies not only to European countries, but also to Asia, including Taiwan, Japan, South Korea.


The Philippines is known throughout the world as the birthplace of healers - healers who perform surgical operations with "bare" hands. The first mentions of healers are found in the written testimonies of sailors of the 16th century. In the 40s of the XX century, it was possible to document the process of such an operation.

Sports play an important role in the life of modern Filipinos, and famous athletes have the status of national heroes. One of them is the swimmer Teofilo Ildefonso, who became the first Filipino in history to win an Olympic medal - it was "bronze" in 1928 in Amsterdam. The athlete repeated his success 4 years later at the Los Angeles Olympics. Teofilo Ildefonso ended his life tragically - during the Second World War he died in the Japanese concentration camp Capas.

Another national hero is our contemporary Emmanuel Pacquiao, professional boxer, actor and politician. He is the first and so far the only boxer who has become a world champion in eight weight categories.

The traditional cuisine of the islands was formed under the influence of Chinese, Arabic, Spanish, Mexican, Indian culinary traditions. The Filipino menu has a lot of fish, seafood, various meats, fruits and vegetables. Local cuisine is not complete without rice, which serves as a side dish for many meat dishes.

One of the most popular Filipino dishes - lechen - roasted whole pig.

Filipino shopping centers, malls, are mini- cities with restaurants, Internet cafes and cinema halls where you can buy everything from clothes and accessories to household appliances and precious jewelry from local firms and world brands. At the same time, prices are several times lower than in Europe and the USA.

The most popular resorts of the Philippine archipelago are the islands located in the south: Boracay, Panay, Bohol, Cebu, Palawan and, of course, the Philippine capital - Manila. attracts vacationers with its rare exotic nature, beautiful beaches, a variety of hotels, restaurants and clubs that are open around the clock.