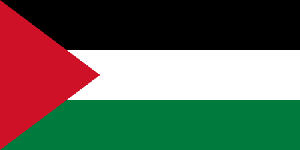 The flag of Palestine comes from the flag of Arab nationalists during the Arab uprising against the Ottoman Empire in 1916-18.
The flag is a rectangular panel consisting of three equal horizontal stripes: upper black, middle white and lower green, with a red isosceles triangle at the pole edge.
According to the Palestine Mission in Germany, black is the color of the Abassids, white is the color of the Umayyads, red is the color of the Kharijites, the conquerors of Andalusia and the Hashemites, green is the color of the Fatimids and Islam. All four colors are pan-Arabic. 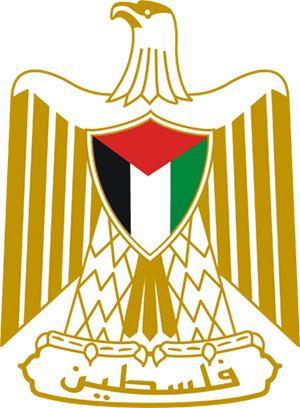 The coat of arms of the State of Palestine first appeared in 1988. The state symbol is an image of a silver "Eagle of Saladin" with black wings, a tail and the upper part of the head, looking to the right, and having a pointed shield on the chest, repeating the design of the flag of Palestine in a vertical position. In its paws, the eagle holds a cartouche on which the name of the state is written in Arabic: جمهورية مصالسلطة الفلسطينية.

Applying for a visa to Palestine

Russians need a visa to visit Palestine.
The Embassy of Palestine does not consider visa requests from foreign citizens. It is easier to get to the Palestinian territories through the Israeli border, so for questions related to obtaining a visa, you need to contact the Consular Section of the Embassy of Israel.

How to get to Palestine from Russia on your own

There are no operating airports in the Palestinian territories, so the vast majority of tourists enter Palestine through Israel.
By land, you can get to Palestine from Egypt (the Rafah checkpoint) to the Gaza Strip and from Jordan (the Allenby Bridge checkpoint) to the West Bank. In each of the countries, buses run to the border, then you need to cross it on foot (in the case of the Rafah checkpoint) or take a special bus (in the case of the Allenby Bridge checkpoint), and then take a local bus.
News
ПУБЛИКАЦИИ

The Middle Eastern country of Palestine currently has the status of a partially recognized state. Of the 193 countries that are members of the United Nations, more than 130 recognized the independence of Palestine.

The state is located on the Sinai Peninsula, in the southwestern part of Asia. Its shores are washed by the Mediterranean Sea. Palestine is divided into two territories: the West Bank, bordering Israel and Jordan, and the Gaza Strip, neighboring Egypt. The eastern part of Jerusalem, the capital of Israel, is also considered Palestinian.

The country is located in a subtropical climate zone with Mediterranean hot summers and warm winters. The terrain is mountainous. The highest point is Tal-Asur peak (1022 meters). The largest river is the Jordan, which originates in the north, in Lake Tiberias, and flows into the Dead Sea in the south. The coastline of the Dead Sea is the lowest landmass on our planet.

Local flora is represented by oak, olives, Jerusalem pine and plane tree. Of the representatives of the animal world, you can meet here a fox, hares, hedgehogs, snakes and lizards.

This land is sacred to Jews, Christians and Muslims. The word "Palestine" comes from the name of the ancient country of Philistia, which was inhabited by the well-known Philistines from the Old Testament. Philistia was located on the Mediterranean coast of the Sinai Peninsula and consisted of five cities - policies. In Phoenician and Hebrew, the entire territory from the Mediterranean Sea to the Jordan River was called Canaan (in modern Russian, Canaan).

Interesting fact: It is believed that the Philistines are the descendants of the peoples of the island of Crete. They worshiped the sea god Dagon, did not settle deep into the territories, but raided the nomadic tribes of the Semitic Jews, who in the 11th century BC already occupied the lands along the banks of the Jordan. It is known that the biblical warrior Samson died in the Philistine city of Gaza.


From the 2nd millennium BC, Canaan was conquered by the Jews, who founded the kingdom of Israel on its territory. In 135, after the suppression of the uprising of the Jews, the Roman emperor Andrian ordered to call these lands Syria Palestine. After 500 years, the Arabs settled here, who named the country Falastyn.
From the 11th to the 13th centuries, Palestine was rocked by endless crusades for the liberation of the Holy Sepulcher. In the 16th century, these lands became part of the Ottoman Porte - the Ottoman Empire.

After the First World War, the region of Palestine came under the mandate of the League of Nations under the control of Britain. In the 1920s, in most of its part, the British created the emirate of Transjordan, which gained independence in 1946. Since 1950, the emirate has become known as the Hashemite Kingdom of Jordan (Jordan).

In the autumn of 1947, at the session of the UN General Assembly, Resolution No. 181 was adopted, which spoke of a plan to divide the remaining territory of Palestine into Jewish and Arab states. Unlike the Jews, who agreed to the resolution, the Arab leaders rejected it. At the same time, not all the inhabitants of the region began to be called Palestinians, as it had been since the time of the Roman Empire, but only Arabs.

November 15, 1988 in Algiers at a session of the Palestinian National Council, by a majority of votes, a decision was made to proclaim the State Palestine. In November 2012, the country received the status of an observer state at the UN. In January 2013, the decree of the Chairman of the Palestinian National Authority on the official use of the name "State of Palestine" came into force. More than 80% of the country's population are Palestinian Arabs and about 17% - Jews.

The cultural life of Palestine is mainly its literature, classical and modern. The poetry and prose of Palestinian authors are known far beyond the borders of the country. One of the most widely read poets is the laureate of the Lotus International Literary Prize Mahmoud Dervish. Palestine is the birthplace of young, but already world-famous filmmakers Elijah Seleyman (Chronicle of Disappearance and Divine Intervention), Nizar Hasan (Invasion) and Samir Abdul-la (Chronicle of the Siege).

UNESCO took under protection in Palestine the Basilica of the Nativity, built in Bethlehem in the 330s over the cave in which, according to legend, Jesus Christ was born. Under the protection of this organization is the village of Battir with its unique irrigation system that preserves the landscape of planted olive trees and vineyards. The ancient city of Hebron, the second holy city for Jews after Jerusalem, is also protected. The Arabs also honor him - after Mecca, Medina and, again, Jerusalem.

Interesting fact: According to legend, in Hebron there is the Cave of the Patriarchs with the graves of the first people - Adam and Eve, as well as the biblical patriarchs and their wives - Abraham and Sarah, Isaac and Rebekah, Jacob and Leah.< /i>


There are public and private schools in Palestine, as well as educational institutions established by UNESCO in refugee camps. The best university in the country is Birzeit University, which is located a few kilometers from Ramallah, the temporary capital of Palestine. But young people prefer to receive higher education in the universities of Lebanon, Egypt and Syria.

Medical care in Palestine is represented by public and private hospitals. In the Gaza Strip, hospitals lack the necessary medicines and equipment, and there are power outages. When visiting Palestine, you should know that medical services here are paid and quite expensive.

Since 1996, the national team has regularly taken part in all the Summer Olympic Games.

Once in Palestine, in addition to Hebron and Bethlehem, you should definitely visit Jericho - a city with a history of ten thousand years. On its northwestern outskirts is the Orthodox Greek monastery of the Temptation, built in 340 on the Forty-Day Mount. According to the New Testament, it was here that Christ was tempted by the devil for forty days.

As in all countries where Islam is the state religion, all Muslim holidays are celebrated in Palestine - they are calculated every year according to the lunar calendar. From secular holidays and memorable dates, they celebrate the Day of the Palestinian Prisoner - April 17, the Day of Palestinian Independence - November 15, the International Day of Solidarity with the Palestinian People - November 29. The last date was established in 1977 at a meeting of the General Assembly of the United Nations.