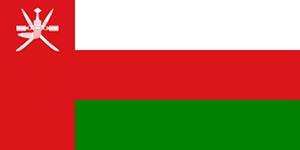 The flag of Oman consists of three equal horizontal stripes of white, red and green colors, and a wider vertical strip of red on the left side of the flag. Oriental dagger.
White symbolizes peace and prosperity, red symbolizes the fight against foreign invaders, and green symbolizes the fertility of the country and agriculture. 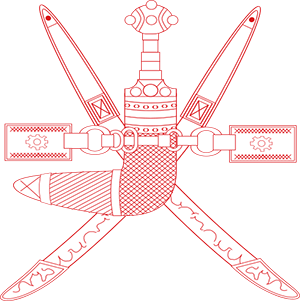 The emblem of Oman consists of two crossed sabers in a sheath, blades down, with a dagger superimposed on top of them - a khanjar in a sheath, with belt details.
The use of this emblem as the state symbol of Oman began in the middle of the 18th century.

Applying for a visa to Oman

Russians need a visa to travel within the Sultanate of Oman. It can be obtained at the airport by prior arrangement with a resident of the Sultanate, which can be an individual, an Omani tour operator or a company registered in this country. Also, a visa to Oman is issued at the country's diplomatic mission in Moscow. A visa with a "corridor" of 6 months opens for 10 or 30 days.
A visa is also required for a transit visit to the country, if its duration  exceeds 6 hours. At the same time, you cannot leave the airport area.
In the case of traveling by any sea mode of transport with a call to the port of the Sultanate, a transit visa is issued only if you have a UAE visa.
Unlike most Arab countries, Oman issues a visa to tourists who whose passports are stamped with a visit to Israel.
Most often, unmarried women under 30 years old who travel unaccompanied by relatives are denied a Sultanate visa.

How to get to Oman from Russia on your own

There are no direct flights from Russia to the Sultanate of Oman. Convenient connections are offered by Emirates,  Qatar Airways   Etihad &  Turkish Airlines. With a transfer in Dubai, Doha, Abu Dhabi and Istanbul, respectively.
News
ПУБЛИКАЦИИ

The oldest independent sultanate in the world is located in Western Asia in the southeast of the Arabian Peninsula. The Sultanate also owns the Musandam Peninsula, separated from the country by the territory of the United Arab Emirates. In addition to the UAE, Oman's neighbors are Saudi Arabia and Yemen. The shores of the country are washed by the waters of the Arabian Sea, the Gulf of Oman and the Persian Gulf.

Interesting fact: The legend says that the country was named after Oman ibn-Katan - the first person who settled on these lands.


Along the coast of the Gulf of Oman stretches a green plain, turning into the Hajar mountains, in the center and in the southeast - a hilly-mountainous area. In the west, the kingdom of the Rub al-Khali desert begins, one of the most extensive and hottest in the world.
The highest point above sea level in Oman is Mount Ash-Sham - the mountain of the Sun. Its height is 3009 meters.

Interesting fact: < i>There is a military radar station on Ash-Sham, so climbing it is prohibited.


The country is located in a tropical climate zone. The main city of the Sultanate - Muscat - is recognized as the hottest capital in the world. Here, even in winter, the temperature does not fall below +20°C, and in summer it stays at +35°C. Most rain falls in mountainous areas - up to 500 millimeters per year.

The local flora is not very diverse. Small groves of tamarisk, fig, plane tree and oak grow in the mountains, and palm groves in the north and south. The fauna is represented by sand gazelles, leopards, hyenas, jackals and foxes. There are many birds and reptiles - geckos, chameleons and agamas.

Scientists believe that the main route of human settlement from Africa to South and Southeast Asia ran through the territory of Oman. Local residents are sure that it is in Oman, in the city of Salalah, that the tomb of the Islamic prophet Ayub is located. True, Lebanon, Syria, Turkey and Uzbekistan believe that he is buried on their territory.

The history of the country is connected with another biblical person - the Queen of Sheba, or Bilkis, Balkis -  so it is called in ancient Muslim legends. Three thousand years ago, the territory of the modern sultanate was part of the Sabaean kingdom, which she ruled. The Bible says that the Queen of Sheba tested the wisdom of King Solomon and, being pleased with his answers, gave him gold, incense and precious stones.

Until the 7th century, when Oman was included in the Arab Caliphate and Islamized, the country almost For 200 years it was a province of the Persian Empire. Until the beginning of the 16th century, Omani merchants traded with India and the Far East, and became monopolists in the delivery of spices and incense to Europe. As a result, the sultanate became a prosperous state with developed crafts and culture.

Interesting fact: Oman is considered the birthplace of Sinbad the Sailor. In 1980, the famous British traveler and writer Tim Severin on the Arab sailing ship Sohar, built according to the technology of the 9th-10th centuries, traveled from Muscat to China - the same as Sinbad the Sailor from Arab fairy tales. Severin devoted the book “On the Way of Sinbad” to this fascinating and informative journey. The Portuguese burned all the Arab ships in the ports, and then ravaged the coastal cities. The inhabitants of the country managed to get rid of the dominion of the European colonial power only in 1650.

At the beginning of the 18th century, another invaders, the Persians, came to Oman, but in 1741 they were expelled by Ahmed Zafari. He created a pirate state, which, together with Oman, included the islands of the Persian Gulf, the coast of Iran and East Africa. Since that time, Oman has never been a colony of any country.

In 1970, through a bloodless coup, overthrowing his father, Sultan Qaboos bin Said came to power in Oman, who still successfully rules. Under him, education, medicine, industry, tourism and many other areas began to develop in the country.

Almost 80% of the population of Oman are Arabs, who are divided into "Arab al-Ariba" (purebred Arabs) and "Arab al- Mustaribe" (mixed Arabs). The country is also home to Indians, Pakistanis, the Balochi people (one of the Iranian peoples) and Kara (similar in ethnic composition to the population of Ethiopia).

The main religion of the country is Islam, or rather, its branch of Ibadism, which in most Islamic states is considered a sect. There are also Sunnis, Shiites, a small percentage of Christians, Jews, Hindus, and Buddhists in Oman.
The locals follow centuries-old traditions, including in clothing. Men prefer to wear a loose long shirt called "dishdasha", and women, unlike other inhabitants of the Persian Gulf, dressed in all black, wear bright dresses, over which they throw beautiful scarves.

Interesting fact: Oman is a very patriarchal country. This is also reflected in the names. So, the prefix "al" means "from the family", "ben" or "ibn" - "son"; "bent" is "daughter", and "bani" or "beni" is "of the tribe". For example, the name of the country's sultan is Qaboos bin Said bin Teimur bin Faisal bin Türki bin Said bin Sultan bin Ahmad al-Said.


Before 1970 There were only three schools in the country. Now there are more than a thousand public schools in the Sultanate, annually accepting 650 thousand students. In 1989, the first state university was opened here, named after the monarch "Sultan Qaboos University". Half of his students are girls.

Fun fact: < i>Despite the conservatism of family life and way of life, women take an active part in the public life of the Sultanate (unlike women in other countries of the Persian Gulf). Here they can teach, engage in medicine and banking.


Medicine in the country is well developed, it is paid, but, if necessary, the first emergency aid will always be provided to tourists free of charge.< br>
Since 1984, athletes of the Sultanate have regularly participated in the Summer Olympic Games. Popular sports disciplines are football and volleyball. Tourists are of great interest in traditional Arab sports - camel and horse races, which take place every weekend in Zeeb and Salalah. In Oman, you can also see bullfights. These fights have nothing to do with bullfighting. Only bulls fight on them, and then until one of them admits his defeat and runs away from the arena.

The basis of the local cuisine is meat (lamb, beef and chicken) and spices. It is worth trying the traditional shua dish - a ram roasted whole on coals in a pit, as well as lyakhm nashif - meat stewed with tomatoes, onions and spices.

In local markets and shopping centers, you can choose a gift for every taste. It can be world-famous Omani spices and herbs, or Arab daggers trimmed with silver, or Bedouin jewelry, as well as incense and perfumes that are famous in the world. The most prestigious Omani perfume brand is Amouage.


Interesting fact: Since ancient times, Oman has been the main source of frankincense. It is produced from the resin of Boswellia, which still grows on the Dhofar plateau.


You can move around the cities of the country and between them either by public transport - buses and taxis, or by taking a car rent.

To start your acquaintance with local sights is the Sultan Qaboos Mosque, the third largest in the world. It was built in 2001 with the money of the Sultan himself. Inside the mosque can fit 6.5 thousand believers.

The next attraction is the 13th century fortress in the city of Bahla, which was once the capital of the country. And lovers of speleology will be interested in seeing the cave of Al Huta with its underground lakes.

Popular tourist resorts of the sultanate are the beach areas of the cities of Sohar, Sur, Nizwa, Salalah and, of course, Muscat.

Holidays in the country are directly related to the Muslim religious tradition. They do not have an exact date and each time are calculated according to the Muslim lunar calendar. A holiday with a fixed date is November 18 - Birthday of Sultan Qaboos. The birthday of the Sultan is a national holiday, which is celebrated very magnificently. On this day, colorful fireworks and camel races are organized.