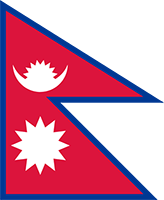 The national flag of Nepal is one of three non-rectangular national flags and one of two non-rectangular flags of a sovereign entity (the other is the flag of Ohio, USA). The flag is a simplified combination of pennants from two branches of the Rana dynasty - the country's past rulers.
The flag was adopted on December 16, 1962. By that time pennants had been used separately for two centuries. They have been used together since the 20th century.
The blue color of the border of the flag symbolizes peace, and the dark red is the national color of Nepal. The two royal symbols represent the hope that Nepal will last as long as the sun and moon. And the triangular transformations of the flag are a symbol of the southern and northern peaks of Mount Everest, or Jo-Mo-Rlung-Ma (Chomolungma).
The triangular shape of the flag is traditional for Indian culture. Some states in India also have triangular flags. 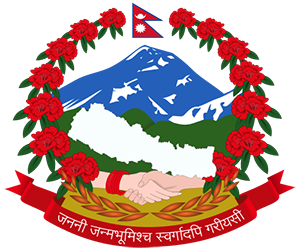 The coat of arms of Nepal was changed during the reconciliation period after the Nepalese Civil War.
The new coat of arms was introduced on December 30, 2006. The emblem contains the flag of Nepal, Mount Everest, green hills symbolically symbolizing the hilly regions of Nepal and yellow color symbolically symbolizing the fertile region, connected male and female hands symbolizing gender equality, and a garland of rhododendrons (national flower). Above this is a white silhouette in the shape of the geographic outlines of Nepal. In the lower part of the coat of arms, a dark red (Nepal color) scroll with a national motto in Sanskrit: जननी जन्मभूमिश्च स्वर्गादपी गरीयसी (Janekī Janmabhūmiśmi vargādapi Garīyasī), which translates as "mother and homeland more than heaven." The text of the motto, often mistaken for a passage from the Ramayana, actually refers to the work Anandamat by Bankim Chandra Chattopadhyay. This coat of arms is the first on which the Nepalese blades were no longer depicted.

Applying for a visa to Nepal

visa for Russians to visit Nepal is required. You can issue it either in advance at the diplomatic mission of Nepal in Moscow, or  directly at the Nepalese border checkpoint at the airport. The minimum stay in the country is 15 days, the maximum is 120 days.

How to get to Nepal from Russia on your own

There are no direct flights from Russia to the capital of Nepal, only with transfers (more often with two connections from 45 minutes to a day). You can get from Moscow using the services of more than 20 airlines, but it will be relatively inexpensive to fly to the country on Turkish Airlines, Ethihad Airways, Emirates, FlyDubai, Air Arabia and Qatar Airlines.
News
ПУБЛИКАЦИИ

The South Asian state of Nepal is sacred to every Buddhist and Hindu. Here in the small town of Lumbini, which in Sanskrit means "Beloved", Siddhartha Gautama was born, later called the Buddha - the Enlightened One. In 563 BC, he was given life by the Indian princess Maya.

Nepal's neighbors are the two most populous countries in the world: India and China. Almost half of the country's territory is located at an altitude of more than 3000 meters above sea level. In the north, the country is surrounded by the Great Himalayan Range. Eight of the world's fourteen eight-thousander peaks are located in Nepal. Among them - the highest peak in the world Chomolungma, which is also called Sagarmatha and Everest. Its height is 8848 meters, the mountain is over 60 million years old.

Chomolungma is a Tibetan name that can be translated as "Divine Mother of Life Force". Mount Everest was named in honor of Sir George Everest, who in 1830-1843 was the head of the Survey of British India. And Sagarmatha is a Nepalese name, in Sanskrit meaning "Forehead of Heaven".

Interesting fact: The national symbol of Nepal is the rhododendron flower. The Nepalese call it "laaligurans".


The fauna of the country is also diverse. It is home to 848 species of birds, 185 species of mammals, including elephant, Bengal tiger, leopard, wild cat, spotted deer, muntzhak (barking deer), Himalayan tahr, blue sheep. In Nepal, you can meet rare and protected animals - the markhorned antelope and the red panda, which, due to its "shyness", is practically not shown to people.

Rare freshwater dolphins are found in the rivers of the country. But, probably, the main asset of the animal world of Nepal is the irbis - the snow leopard, which is listed in the world Red Book and is protected by the law of the country. For killing a snow leopard here you can end up in prison for 15 years. This tough measure has yielded results - today there are about 400 snow leopards in Nepal.

The first people settled in the fruitful valley of Kathmandu in the VIII century BC. The convenient location between China and India allowed the ancient inhabitants of the country to become trading intermediaries, which had a positive effect on their development and prosperity.

Interesting fact: The Kathmandu Valley was a high mountain lake in prehistoric times. Buddhist legend says that Buddha's associate Manjushri cut the mountain with a magic sword, the water left - and a green valley appeared. Hindus believe that the waters of the lake left through the Chobhar mountain gorge, which was cut through by the god Krishna with lightning.


At the end of the 18th century, the Shah royal dynasty came to power in Nepal. As a result of successful wars, the territory of the kingdom expanded at the expense of northern India. For Britain, this was unacceptable, and in 1814 she declared war on Nepal. On December 2, 1816, the peace treaty of Segaul was signed, according to which Nepal gave up the territory between the Kali and Rapti rivers, and an English resident remained in its capital, Kathmandu. For almost a hundred years, the country was under the protectorate of Great Britain.

In 1846, as a result of a bloody palace coup, the Rana clan, headed by Jang Bahadur Kunwar, came to power. For the country, almost a century of rule by this dynasty turned out to be a difficult test. Instead of the necessary schools, hospitals and roads, Jang Bahadur Kunwar erected luxurious palaces, for the construction of which he invited the best architects of Western Europe. His desire to imitate Europeans in everything played a positive role - in 1920 he canceled the sati ritual in Nepal - the burning of the wife of a deceased husband along with him at a ritual fire.

< span style="color: #f7941d;">Interesting fact: Sati can be translated from Sanskrit as “real”, “existing”, “honest”. Sati is another name for the Hindu goddess Dakshayani. Not wanting to put up with the humiliation to which her father Daksha subjected her beloved god Shiva, Sati sacrificed herself.


In 1950, the formal ruler of Nepal, Tribhuvan, fled to India - he was crowned at the age of 5 after the death of his father and kept in the palace as a prisoner. A year later, the king returned as a legitimate ruler, with the support of his supporters, among whom was an emigrant from tsarist Russia, Boris Nikolaevich Lisanevich. King Tribhuvan introduced democratic changes in the country, established contacts with many countries of the world.


Interesting fact: Boris Lisanevich (1905-1985) opened Nepal for tourism to the world. A hereditary nobleman, an Odessan, an emigrant and a ballet dancer of Sergei Diaghilev, he met the King of Nepal, Tribhuvana, in India. Returning with him to Nepal, Lisanevich fell in love with the Himalayas so much that he persuaded His Majesty to open the country's first hotel for climbers. For his hotel, he received an entire wing of the royal palace and named it the Yak and Yeti Park Royal Hotel. A few years later, it was from Lisanevich's hotel that the first climbing expedition left.  In 1959, Life magazine named Boris Lisanevich the second landmark of Nepal after Everest.

Nepal is a multi-ethnic country in which almost a hundred nationalities live and society is divided into castes - varnas . The cast system in Nepal is similar to that in India.

Interesting fact: Revered in India and Nepal, the spiritual teacher Buddha Shakyamuni, the founder of Buddhism, belonged to the Kshatriya caste - warriors, the second after the Brahmins - the clergy.


The local population speaks 70 languages and dialects belonging to the Sino-Tibetan and Indo-European language groups. About 80% of the population professes Hinduism, about 10% - Buddhism.

Nepalese social life revolves around the family, headed by the husband-father. A woman's life depends on a man. Three out of four women in Nepal are illiterate.

The country has public and private schools, but most children fail to complete even primary school. From the age of 5-7 they are forced to work. Nepal is one of the poorest countries in South Asia, the average income of every fourth inhabitant here is 30 euros per month.

As in all countries of the region, in Nepal there is not only modern official medicine, but also traditional, which is not one thousand years. But it is better for tourists to have a first aid kit with them, as well as international medical insurance. Vaccinations against diphtheria, poliomyelitis, hepatitis, meningitis, typhoid and rabies must be made in advance. Medical services in Nepal are paid. If necessary, it is better to seek help from clinics that work with the support of Western medical companies.

Since 1964, Nepalese athletes have been participating in the Olympic Games. Popular disciplines in the country are skiing, volleyball and football.

Local dishes are simple and rich in hot spices. As a rule, on the table of local residents you can see lentils, rice, beans, sometimes vegetables and meat. Very tasty momo, which resemble Russian dumplings, and dal-bat - rice with lentil soup and sauces.

You can bring decorations and national clothes from Nepal, which are of very high quality. Souvenirs are in demand - wooden masks, bronze bells, Tibetan singing bowls, figurines of Buddhist and Hindu gods. True, an ordinary long-distance bus in Nepal looks like a crowded box on wheels, in which local residents also carry small livestock or poultry.

Most Nepalese sights can be seen in the country's capital. It is in Kathmandu that the center of ancient Darbar architecture is located. 12 kilometers from the city is the ancient Lalitpur - translated as the "City of Beauty" with many magnificent shrines, including a temple erected in honor of the 8 wives of King Malla, who took the rite of self-immolation after his death.

Buddhist and Hindu pilgrims from from all over the world tend to visit the small town of Lumbini, which is located on the border of Nepal and India. The town is considered the birthplace of Buddha, so each country where Buddhism is practiced has contributed to the creation of the local memorial park and many temples.

The towns of Nagarkokt and Pokhara are popular with tourists. It is here that the tourist routes to the Himalayas begin. Nepal is a climbers dream. There are 438 vertices, 326 of them are climbable.


Interesting fact: The Nepalese are convinced that Mount Kanchendzhaga (8586 meters, the second after Chomolungma), which Nicholas Roerich often painted, is a woman. Therefore, she does not submit to women. Local residents say that anthropoid yetis live in the foothills of Kanchenjaga and there is an entrance to the mythical Shambhala.


All holidays of the country reflect Hindu and Buddhist traditions and are dedicated to the gods these religions.