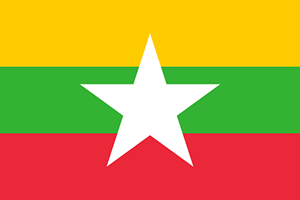 In October 2010, the full official name of the country "Union of Myanmar" was changed to "Republic of the Union of Myanmar" and the state emblem and flag of the state were changed.
The flag is a rectangular panel of three horizontal equal stripes: yellow, green and red, in in the center of which is placed a large white 5-pointed star. The three colors of the flag's stripes symbolize solidarity, peace and stability, courage and determination. The white star is a symbol of the unity of the country.
Interesting facts: Flag of Burma/Myanmar in 1948-2010. was similar to the flag of the Republic of China (Taiwan) and Samoa. For example, at the 2008 Beijing Olympics, Taiwanese fans used the flag of Myanmar, as the Taiwanese flag is banned in China.
The new flag of Myanmar resembles the flag of Lithuania, differing only in a star. 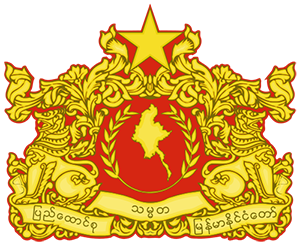 An agreement on visa-free travel between Russia and Myanmar has not been concluded. Citizens of the Russian Federation can obtain a visa at the country's embassy in Moscow, via the Internet, or in countries neighboring Myanmar.

How to get to Myanmar from Russia on your own

There are no direct flights from Russia to Myanmar. It is cheaper and more convenient to get to Myanmar by flights with transfers in Bangkok, Kuala Lumpur, Singapore and Hanoi. And then a direct flight to one of the airports in Myanmar: Yangon or Mandalay. The cheapest flights to Myanmar are with Air Asia (Bangkok-Yangon and Bangkok-Mandalay).
You can also get to Myanmar through land borders with Thailand, China and India.
News
ПУБЛИКАЦИИ

Myanmar until the end of 1989 was known to the world as Burma. In the Burmese language "Myanmar" means "strong", "fast".

The mountainous country is located on the Indochina peninsula, in its western part, and on several adjacent islands. Myanmar's geographical neighbors are Bangladesh, India, China, Laos and Thailand.

The waters of the Bay of Bengal and the Andaman Sea wash the shores of Myanmar in the south and southwest, and the country's largest water arteries are the Salween and Irrawaddy rivers. The highest peak is Mount Kakabo Razi in the Himalayas, it rises to 5881 meters above sea level and is the highest peak in Southeast Asia. in the highlands and +24 on the plains, and in summer it reaches +41. Thanks to this climate, local residents can harvest 2-3 crops a year.

Tropical forests occupy up to 60% of Myanmar's territory, but they do not exist in the densely populated center - here every plot of land is cultivated by peasants. They grow rice, legumes, cereals, tea, sugar cane, oilseeds and horticultural crops.

Among the 3000 species of animals of the local fauna, there are rhinos, tapirs, peacocks, wild elephants.

In the XII century, Burmese and the Mon kingdoms, which were located on the territory of present-day Myanmar, fell under the onslaught of the Mongol conquerors. The first unification of the country fragmented into small kingdoms began in the 16th century, when the kings of Taungoo defeated the rulers of Siam and expanded their dominance. In the 18th century, the Burmese destroyed the ancient capital of Siam, Ayutthaya, after which the Siamese made Bangkok their main city.

In the 18th century, British colonization of the country began. To subdue the local population, Great Britain had to send its troops three times: in 1824, 1852 and 1883. During World War II Burma was occupied by Japan.

The country gained its independence in 1948, but military conflicts began between local communists, Muslims, mountain tribes and Mon tribes. In 1962, the communists won, after 25 years there was a putsch and power was again in the hands of the military, who promised to hold elections in 1989. The opposition forces united in the National Democratic League (NDL), headed by Aung San Suu Kyi, the daughter of the national hero, the fighter for the country's independence, Aung San. In the elections, the NDL received a majority of votes, but the military junta, with the help of the Karen rebels and the personal army of the drug lord Khun Sa, did not allow it to come to power. Aung San Suu Kyi was placed under house arrest. During this imprisonment, in 1991, she was awarded the Nobel Peace Prize. With the assistance of a UN representative, Aung San Suu Kyi was released in May 2002 and she is still actively involved in the political life of the country.

Myanmar is also known as the birthplace of the Padaung tribe, whose women stretch their necks with the help of spiral rings made of copper rod. The neck begins to lengthen from the age of 5 and ends when the girl gets married. As a result, an adult woman can wear up to 20 rings with a total weight of 5 kilograms. Among the Padaungs, a long neck is a sign of female beauty and well-being.

Interesting fact: In the legend of the Padaungs, it is said that the ancestors of the people were the wind and the dragon. Upon learning that the wife was expecting a child, a happy wind began to circle around her. The spiral on the women's necks reminds of this dance of the wind.


Education in the country is free, although private schools and universities have recently begun to appear. Children go to school at the age of 5. After a few years of compulsory primary school for all, children can learn the skills of a trade, fishing, or continue schooling. Upon completion of the middle classes, there is an opportunity to enroll in a technical or agricultural school. And only after two years of high school, graduates enter universities, where education lasts from a year (for example, in teachers' institutes) to 7 years (in medical schools).

Medical care in the country is free, but its level is still low . Myanmar has a developed network of hospitals and clinics, most of which are located in large cities.

To visit the country, it is recommended to stock up on international health insurance, get vaccinated against malaria, tetanus, cholera, poliomyelitis and hepatitis A, B, E.

Myanmar-Burma is considered the birthplace of the three main types of martial arts in Southeast Asia. First of all, these are bando and poungi secrets that arose in Buddhist monasteries. Locals are also very fond of lehwei - Burmese boxing. Of the modern sports disciplines, volleyball and football are popularized in the country. Myanmar athletes have been taking part in the Summer Olympic Games since 1948.

Culture and life in Myanmar are subject to centuries-old rules of Buddhism and astrology. Not a single important decision in the life of a state or a person is made without astrologers. For example, the transfer of the capital of Myanmar from Rangoon to Pyinmana began strictly on the day and time indicated by astrologers - November 6, 2005, in the morning, at 6 hours and 37 minutes.

By tradition, every male Buddhist at least once in his life to become a monk for one year. Residents of the country, men and women, prefer national lounge skirts and slippers to modern European clothes and shoes. Local fashionistas adorn their faces with tanaka paste, which is made from the tree of the same name. Tanaka on the face serves not only as a decoration, but also as protection from bright sunlight.

As well as in all countries of the region, the national cuisine of Myanmar is a mixture of Indian, Chinese, Thai dishes, which are based on rice. It also contains a lot of fruits, vegetables, fish and hot spices. One of the favorite local delicacies is pickled tea leaf salad served with garlic, onion, sesame seeds, roasted peanuts and locust.

Wooden sculptures, paintings, traditional dishes, national clothes can be brought from Myanmar as a souvenir . There are many shops selling gemstone jewelry in local markets, but there is a risk of buying a fake.

Myanmar is often called the "land of thousands of temples", and this name is more than justified. Only in the city of Pagan - the ancient capital of the kingdom of the same name, whose area is 42 km², there are 4000 Buddhist temples, pagodas and monasteries.

Interesting fact: UNESCO proposed to the government of Myanmar to include the ancient city of Bagan in the World Heritage List, but was categorically refused. Therefore, it lists only one object, or rather three in one - the territory of the ancient Pyu kingdom, where the unique cities of Khalin, Beikthano, Sri Kshetra are located.


Myanmar's world-famous landmark is the Shwedagon Pagoda in Yangon. Its height is 99 meters, it is covered with gold, and the upper tiers are also inlaid with a thousand precious stones. The pagoda is also famous for the 55-meter statue of the reclining Buddha, and shrines are kept in it - 4 hairs of the Great Teacher. The pagoda was built 2500 years ago, but is still in operation, Buddhists around the world revere it as a shrine.

Over the 25 centuries of its existence, the Shwedagon pagoda has been plundered twice. In 1608, the Portuguese Filipe de Brito-e-Nicote took valuables from there, “grabbing” including the golden Dhammazedi bell, decorated with emeralds and sapphires - it was called the Great, it weighed 294 tons. The bell did not reach Portugal - it sank at the confluence of the Pegu and Yangon rivers. Then, in 1825, the British tried to take another bell out of the country - Singumin. Decorated with gold and precious stones, the bell weighed 23 tons and also sank. The colonial government promised to leave Singumin to Burma if the locals could bring it to land. With the help of flexible bamboo logs and folk skill, the treasure was saved.

Another attraction of the country is the Jumping Cats Monastery, which is located on an island in the middle of Inle Lake. The lake is also known for its floating markets, which are organized by the locals once a week.

The best resorts in the country are located on the west coast of Ngapali and Ngwe Saung. Active recreation in Myanmar is not yet very developed. Some companies offer cycling and hiking to local attractions. Hot air balloon rides are very popular among tourists - from a bird's eye view, ancient cities and temples look even more beautiful.

Myanmar's national holidays are regulated by the Burmese lunar calendar - it is published by the Ministry of Agriculture and Irrigation. May 1, along with many countries of Myanmar celebrates Labor Day, and July 19 is a public holiday - the Day of the Martyrs - in memory of the fighter for the independence of the country, Aung San, and his associates, who was killed in 1947.