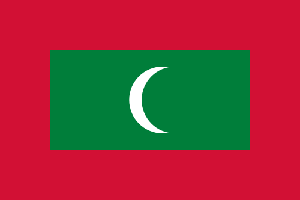 The flag of the Republic of Maldives was adopted on July 25, 1965. It is a red cloth with a green rectangle in the center, the rectangle depicts a vertical crescent with horns directed from the shaft.
The red color symbolizes the courage of national heroes of the past, present and future, who did not hesitate and will not hesitate when it was necessary protect the nation by yourself, shed your blood. The green rectangle in the center represents the countless number of coconut palms that grow on the islands. The white crescent symbolizes the state religion - Islam. 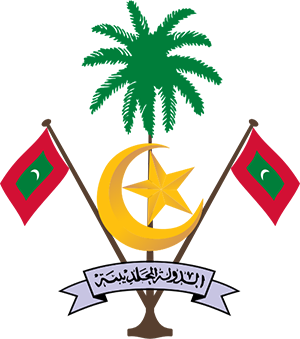 The coat of arms of the Maldives consists of a coconut tree, a crescent and two crossed national flags with the traditional name of the state in Arabic.
The coconut tree depicted on the emblem recalls the main means of subsistence of the nation. The residents consider this tree to be the most significant for them, as they use every part of the tree in various fields, from medicine to shipbuilding. The crescent (a universal Islamic symbol) and the star accompanying it embody the Islamic faith of the state and its authority, respectively.
The words on the scroll "Ad-Dawlat al-Mahaldhibiya" (Arabic الدولة المحلديبية‎) are written in the Arabic naskh style. This name was used by one of the most celebrated national heroes of the Maldives, Sultan Al-Ghazi Mohamed Fakurafaani Al-Azam. It means "the state of Mahal Dibiyat" - this is how Ibn Battuta and other medieval Arab travelers called the Maldives.

Applying for a visa to the Maldives

How to get to the Maldives from Russia on your own


One of the most expensive and prestigious resort centers in the world is comfortably located in the equatorial waters. The closest neighbors of the Maldives are Sri Lanka, India and the Chagos archipelago.

The Maldives are 26 ring-shaped atolls, consisting of 1192 small and very tiny coral islands, of which only 202 are inhabited, and more than 70 are islands- resorts. Each resort island is fully self-sufficient, from power generators and seawater desalination plants to greenhouses where fruits and vegetables are grown.

Ari. The distance between them is 25-80 kilometers, you can get from point "A" to point "B" by seaplane, boat or ferry. The latter is considered the most "budget" way to travel.

The coral archipelago is of volcanic origin, its highest point is located on the Aldu (Siena) atoll and is only 2.4 meters above sea level. In this regard, the Maldives is the lowest country in the world. Moreover, due to the constantly rising sea level, the archipelago is gradually sinking into the water. Scientists do not exclude that in 60-80 years it may disappear in the waters of the Indian Ocean. In the meantime, the flow of tourists to the Maldives does not dry out, because this is one of the most desirable vacation spots.

Due to the subequatorial monsoon climate, two seasons are clearly expressed in the archipelago: from November to March it is dry here, and from June to August it's raining. The average annual temperature varies from +23 to +32 degrees.

The Maldives are known for the variety of marine life - more than 1100 species. In coastal waters, colorful exotic fish swim in large schools, barracudas, rays, turtles, whales and dolphins swim. Starfish, mollusks, crustaceans, coral polyps live here. Often, sharks can be found off the Maldivian coast. And if the tiger and whale sharks are not dangerous to humans, then blacktip and reef sharks should beware.

Terrestrial flora and fauna are much more modest. Banana and coconut palms, breadfruit, bamboo, mangroves and ferns grow in the Maldives. Animals and birds include bats, flying foxes, parrots, sea gulls and cormorants.

An interesting fact : According to local legend, the first inhabitants of the Maldives were "redins" - tall white people with blue eyes and dark hair. They belong to the ancient Aryan civilization that originated in the Indus Valley.

Archaeological excavations have shown that the first people appeared on the islands in the 5th century BC. The first mentions of the archipelago are found among the Arabs and Persians in the 5th-7th centuries. Until the beginning of the XII century, the inhabitants of the islands professed Buddhism, but in 1153 an Arab preacher arrived on the archipelago, through whose efforts the population converted to Islam. Based on the written testimonies of merchants and travelers, female sultanas ruled the islands for hundreds of years.

Interesting fact: The legend says that in ancient times, Male was terrorized by an evil genie, taking the most beautiful girls to eat. Once, on the eve of another attack, a visiting Arab preacher read the prayers of the Koran all night long - and the demon no longer appeared. The preacher also became the first sultan of the country.


The inhabitants of the Maldives survived several attempts by Europeans to establish their power here, but the conquerors always faced popular indignation and guerrilla movement. From the middle of the 16th century, the Portuguese tried to subjugate the paradise islands, then the French and the Dutch. In 1887, Great Britain managed to establish its protectorate here, and only in 1965 the Maldives gained its independence.

Almost the entire population of the Republic of Maldives is the descendants of immigrants from South Asia and the Middle East who arrived here several centuries ago. The Maldivians are very leisurely, hospitable and friendly.

The country has private and public medical facilities, seven hospitals. One of them - the Indira Gandhi Memorial Hospital - was opened in 1994 and is able to serve almost the entire population of the islands.
< br> When visiting the country, tourists are advised to have international health insurance and get vaccinated against hepatitis A and B. First aid can be obtained in modernly equipped medical rooms in hotels.

Traditional island cuisine is a mixture of Indian and Arab dishes. Its main ingredients are fish, rice and coconuts. The most popular local fish is tuna, which is fried, dried, smoked, baked and boiled.
Interesting fact: Tuna and tourism are the main "ingredients" of the republic's economy. At the same time, tourism makes up only 20% of the country's GDP, and the export of tuna (together with mackerel and other marine life) is 75%.

Since the Maldives is a Muslim country, alcohol can only be bought here on resort islands. The import of alcohol is strictly prohibited and punishable by local laws. The Maldivians themselves drink green tea, to which sugar and milk are added.

One of the attractions of the Maldives is the capital - Male. She herself is an island, more precisely, four adjacent islands. The area of the city is 5.8 km², and it can easily be cycled around or walked around in just a couple of hours.

Most of the souvenir shops are located in the northern part of the city. As a memento of a holiday in the Maldives, you can buy, for example, a palm fiber mat or a decorative fishing boat.

Compared to other world tourist centers, there are very few attractions in Male. Curious guests may be interested in the National Museum in Sultans Park, the Islamic Center with the Good Friday Mosque and the Medu Ziyarat Chapel. But tourists fly to the Maldives mainly for the heavenly bliss that white sand and blue lagoons give.

However, in addition to passive relaxation on the beach, tourists are offered to experience all the delights of active recreation and go in for windsurfing, water skiing, diving , fishing, pooping on catamarans and canoes. At the resorts of Rihiveli, Bandos, Angaga, Biyadu, Kanifinolu, Mayafushi and Villivar, among other things, you can try your hand at parasailing - soaring over the ocean on a parachute under the supervision of an instructor.

There are very few public holidays in the country. The Maldivians celebrate the holy month of Ramadan, and November 11 is Republic Day and July 26 is Independence Day.