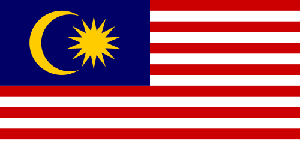 The Malaysian flag, known by the Malay name Jalur Gemilang ("Glorious Striped"), consists of 14 alternating horizontal red and white stripes of equal width, representing the 13 constituent states (states) of Malaysia and the federal government. The dark blue roof in the top corner of the hoist extends down to the top of the fifth red stripe from the top, symbolizes the unity of the people of Malaysia, and contains an image of a crescent moon, symbolizing Islam, the official religion of Malaysia. The 14 rays of the star signify the unity of the 13 states (states) with the federal government. Yellow is the color of rulers. The combination of three primary colors - red, white and blue symbolizes the friendship of Malaysia with the UK and the unity of Malaysia with the countries of the British Commonwealth. 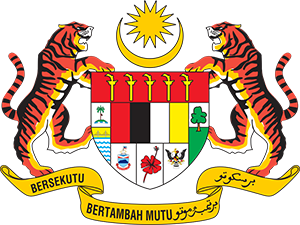 The coat of arms of Malaysia depicts two tigers standing on their hind legs - a symbol of courage and strength. Each of them rests with one paw on a yellow ribbon with the motto in Malay “In unity is strength” (the motto is repeated twice: in Latin and in “Jawi” - Arabic script), and with the other supports the shield. Above the shield is a yellow crescent and a star with 14 equal rays. On the top of the shield are five national daggers - kris - a symbol of the five former unfederal Malay principalities (Johor, Kedah, Perlis, Kelantan, Terengganu). On the left on the shield there is an areca palm and an image of a bridge over the water - the symbol of the state of Penang, on the right - a malacca tree - the symbol of the state of Malaka, which were formerly part of the Straits Settlements colony. In the center - from left to right, red, black, white and yellow rectangles of the same size - the colors of the former federated Malay principalities: black and white - Pahang, red and yellow - Selangora, black, white and yellow - Perak, red, black and yellow - Negeri -Sembelan. At the bottom left is the symbol of the state of Sabah, on the right is the image of a hornbill - the symbol of the state of Sarawak, between them is the national flower of hibiscus (bunga rai).

Applying for a visa to Malaysia

For a tourist trip up to 30 days, a Malaysian visa is not required.

How to get to Malaysia from Russia on your own

According to some linguists, the country got its name from Indian merchants. From Sanskrit, the words malaiur or malayadvipa are translated as "mountain country". Others are convinced that Malaysia owes its name to the Tamil word malai - "mountain".

Malaysia is washed by the waters of the Strait of Malacca and the South China Sea, which divides the country into two parts. The western part is located on the Malacca Peninsula, the eastern part is in the north of the island of Kalimantan (Borneo).


Interesting fact: On the Malacca Peninsula is the southernmost point of mainland Asia - Cape Piai.


The gently sloping coastline with sandy beaches is sometimes interrupted by ledges of granite plates. The largest islands of Malaysia are Penang, Labuan, Langkawi and Tioman.

Interesting fact: The bridge between mainland Malaysia and the island of Penang occupies an honorable third place among the longest bridges in Asia - it stretches for 13.7 kilometers.


The country borders with Thailand, Singapore, Indonesia, Brunei and the Philippine Islands.

Malaysia has an equatorial climate - it is always hot and humid here. The temperature reaches +27 degrees Celsius, and the rainfall is up to 2500 millimeters per year. From May to September, the southwest monsoon comes here from Australia, and from November to March, the northeast monsoon, which originates over China.

Half of the country is covered with equatorial jungle. Malaysia has almost 15,000 plant species and 2,000 tree species. The most exotic are "walking trees", their roots grow from the middle of the trunk and can move along the ground in search of water. For a year, such a tree is able to "pass" from three to five meters. Here grows the world's largest flower - rafflesia, whose diameter reaches one meter and weighs 10 kilograms. These flowers are known for their unusual bright colors and very unpleasant smell.
The fauna of Malaysia is also diverse and partially endemic - peculiar only to this region. More than 200 species of mammals live here, including the Malayan bear, Sumatran rhinoceros, black-backed tapir, gaur, Asian elephant, Indochinese and Malayan tigers. Malaysia also has about 620 species of birds, 230 species of snakes and lizards.

Interesting fact: In Malaysia, the world's largest king cobra was caught with a length of 5.71 meters.


The ancestors of modern Malaysians came to the Malay Peninsula in 2500-1000 BC from the southern regions of China. Already in the 1st century AD, the Strait of Malacca became a trading place for merchants from India and China.

In the 15th century, Islam became the state religion of the country and the Malacca Sultanate flourished, which, due to its convenient location between Europe and Asia, became the main trading and transshipment center of the region.

The time at the turn of the 15th and 16th centuries was a turning point for the Sultanate. In 1498, the Portuguese, who wanted to control the entire world trade in spices, sent an expedition to India. In 1509, their ships entered the port of Malacca, and two years later the city was taken by the troops of Afonso d'Albuquerque.

In the 19th century, the British colony Straits Settlements was founded on the territory of modern Malaysia and Singapore. At the beginning of the 20th century, the economy of the colony - British Malaysia - was based on tin mining and rubber production. The shortage of labor was quickly compensated by emigrants from India and China.

The state religion of Malaysia is Islam - it is practiced by 60% of the population, but there are also adherents of Buddhism (19%), Christians (9%), Hindus ( 6%), Confucians and adherents of other religions (more than 2%).

Interesting fact: In Malaysia, it is not customary to eat and greet with the left hand - this is considered impolite, "dirty".


Half of the country's population is so called Orang Asli. These are indigenous peoples, including the Malays. The second largest ethnic group is the Chinese, which are more than 23%, followed by the Indians - 7%. The smallest part is Europeans and immigrants from the Middle East. A very special people - sea gypsies, bajos. They live in boats that drift between Malaysia, Indonesia, and the Philippine Islands, or build houses on stilts in the ocean. The barbaric tradition is a vital necessity for them - it helps to avoid sudden pressure drops when sea gypsies dive into the ocean depths for pearls or sea cucumbers.

Education in Malaysia is divided into three types: free in public schools, paid - in private schools and at home.

Interesting Fact: < b>Given the almost unanimous love of Malaysians for Formula 1 racing and the Grand Prix of motorcycle racing, the country's schools introduced the subject of "Design of racing cars."


The oldest institution of higher education in the country is the University of Malaya, founded in 1962 on the basis of the Kuala Lumpur branch of the Singapore University of Malaya. In December 2012, a memorandum was signed between this university and the Institute of Oriental Studies of the Russian Academy of Sciences, involving joint research projects, seminars and conferences.

Medicine in Malaysia is divided into two sectors: free public and private. In terms of the quality of services, it is recognized as one of the best in the world, and in terms of cost it outperforms the United States, Germany and Israel. Therefore, in recent years, more and more tourists are choosing the so-called health tours to Malaysia. Medical services include plastic, cosmetic and orthopedic surgery, cardiac surgery, ophthalmology and much more.

The cuisine of all peoples and nationalities of Malaysia is united by rice, or "nasi", as it is called here. Here they say that rice is life, and everything else is just its decoration. Rice is steamed, fried with spices and vegetables, mixed with fruits. One of the favorite Malaysian dishes is “nasi lemak”, rice boiled in coconut milk.

From Malaysia, you can bring scarves, robes and pareos made of batik, products of the royal tin factory Royal Selangor, where goblets are cast. for Formula 1. Locals consider durian to be the king of fruits and love durian very much - fresh fruit, marmalade from it, and toffee - these sweets can also be brought from Malaysia.
You can move around the country by rented car or taxi. In the capital, Kuala Lumpur, it is most convenient to use buses and the skytrain.

Interesting fact: One of the brightest sights of Kuala Lumpur is the world's highest Petronas Towers - skyscrapers with 88 floors, their height is 451.9 meters.

< br> In Malaysia, you can combine a beach holiday with diving and exploring the local nature and culture. On the west coast of the country, the resort areas of the islands of Pangkor and Langkawi are in demand among tourists. There are many resorts on both the eastern and southern coasts of the country.

There are not so many holidays in Malaysia, they are mainly associated with the main Muslim and Christian dates, with Chinese and Indian traditions. Malaysians also celebrate the New Year on January 1st, Labor Day on May 1st, the Supreme Ruler's Birthday on June 7th and, of course, Independence Day on August 31st.