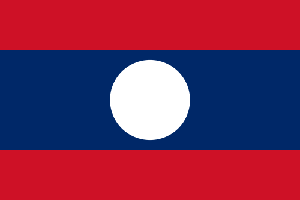 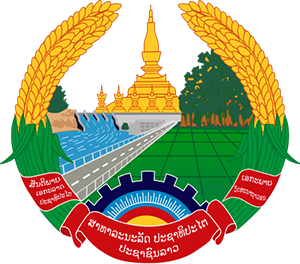 The coat of arms of Laos depicts the national shrine of the country - the Great Stupa Pha That Luang.
The dam of the Nam Ngun basin, like the paved road, and the irrigated rice fields are a symbol of the generation of a new and strong power. In the lower part is the mechanism wheel section. The inscriptions from left to right are "Independence, Democracy", and "Unity and Prosperity". The inscription in the middle means: "People's Democratic Republic of Laos".

Applying for a visa to Laos

Tourist visa is not required for stays up to 15 days in Laos.

How to get to Laos from Russia on your own

The fastest way to fly from Russia to Laos is with a transfer in Ho Chi Minh City, Beijing, Hong Kong, Hanoi or Bangkok. From Bangkok to Vientiane every day, two airlines make several flights: Lao Airlines and Thai Airways.
News
ПУБЛИКАЦИИ

Laos is hazy mountain peaks, fast rivers, magical rainforests and valleys. The country's neighbors are Vietnam, Thailand and Myanmar. The border with the latter two passes, among other things, along the legendary Mekong River - a common artery for China, Myanmar, Laos, Thailand, Cambodia and Vietnam.

Laos is a mountainous country without access to the sea. This fact may disappoint some tourists, but attract others seeking to conquer the peaks. The highest of them is Mount Bia or Fubia (2830 meters).

The subequatorial climate is replete with monsoons and divides the year into two seasons: from May to October - rainy summer, from November to April - dry winter.  Temperatures can range from +15℃ in mountainous areas to almost +40℃ in the plains. On average, up to 3000 mm of precipitation falls here annually.

Such a climate for the flora and fauna of Laos is simply a paradise. The mountain slopes of the country are covered with tropical forests, which at an altitude of 1500 meters turn into mixed ones. Palm trees, beech, oak, pine, magnolias, sandalwood and rose - this is not a complete list of the country's rich flora. Here you feel as if you are in the time of Kipling and his heroes.

Laos has preserved rare species of animals: marsh lynx, marbled panther, Tibetan bear, Indochinese tiger. Not all countries in the region can boast of such a list. In the jungles of Laos, you can easily meet flocks of macaques and singing gibbons, and on the banks of the river - banteng bulls or wild elephants. Flocks of noisy bright parrots fly everywhere, ducks swim and important peacocks walk around with their tails spread.

An interesting fact: in modern Laos there are 20 state natural parks. They have hiking trails, and hunting is strictly prohibited.

Walking through the Lao jungle, it is important not to lose vigilance with delight - here you should remember about cobras and pythons, which are always in abundance in tropical rainforests.

The state was formed in the XIV century, but Europeans learned about Laos, or Lan Sang Hom Khao - the Kingdom of millions of elephants and a white umbrella - only in the XIX century, when in 1893, under an agreement between France and Siam, the country became part of French Indochina.

Long-awaited independence Laos received only in 1949, becoming a kingdom headed by His Majesty Sisavang Wong. But the civil war that began in the next decade led to the fact that North Korea and the United States intervened in the internal conflict of Laos. In parallel, the Vietnam War began, during which about 260 million bombs were dropped on Laos. This was due to the fact that the main part of the Ho Chi Minh Trail, along which the Vietnamese troops were transferred to the south of this country, passed through the territory of Northern Laos. During the bombing, local residents and the unique nature of the country suffered. And wild elephants, thanks to which the country got its ancient name, were on the verge of extinction.

In 1975, Savang Vathana - the second and last king of Laos - abdicated, all power passed into the hands of the revolutionaries. In 1986, Laos began privatization and restructuring of the public sector, began to attract foreign investment, switched to market relations, but under state control. All this led to some economic recovery, but further growth is constrained by the underdevelopment of infrastructure.

Today, the Lao People's Democratic Republic is an agricultural state, 80% of the inhabitants are employed in this area. The country's population is very unevenly distributed. The main part lives on the border areas with Thailand and on the banks of the Mekong.

The culture of Laos is a mixture of Thai, Khmer and Vietnamese traditions, seasoned with the teachings of Theravada, which is one of the oldest schools of Buddhism. And it is Buddhism that is reflected in local creativity. National music is very specific, accompanied by singing or a small performance. The main Lao musical instrument, the khaen, is a hardwood body supported by a double row of bamboo tubes.

Interesting fact: Laos has two sites on the UNESCO World Heritage List. These are the ruins of the Khmer temple complex Wat Phu and Luang Prabang, an ancient city, the former royal capital.


Education in Laos is available to everyone and, until recently, was held under the slogan “Population for the population "- that is, the educated citizens of the country taught the illiterate to read and write. School education lasts 11 years. Higher education is represented by two institutes: medical and pedagogical.

Traditional sports are still very popular in the country - pirogue racing along the Mekong, muay lao - one of the kickboxing areas, the game of kato - a ball woven from rattan, which is thrown over the net with legs and head. In recent years, football, volleyball and table tennis have been gaining popularity in Laos.

The tourist service of Laos is not yet very developed, so a trip to this country may not be interesting for lovers of comfortable passive recreation. But for those who want to escape from the luxury of popular world resorts, Laos is quite suitable. There is a place for lovers of trekking, speleology and mountaineering to roam here.

However, in Laos, in addition to the jungle and mountains, there is still something else worthy of the attention of a tourist. First of all, this is Vientiane with its noisy metropolitan life, the colorful Vang Vieng offering active entertainment, and the former royal capital of Luang Prabang, where viewing magnificent Buddhist temple complexes and monasteries can be combined with exploring caves that look like fantastic underground cities.

Interesting fact: In Laos, every man during his life should at least briefly become a monk. As a rule, people go to the monastery during their studies or before the wedding.


For an unpretentious tourist, the country has everything: hotels and hostels, cafes and restaurants, shops and markets, where, in addition to natural fabrics woven by local weavers and bright paintings of Buddhist gods, you can buy a souvenir made from a real aircraft bomb.


Festivals and holidays in Laos are held on a real scale. All of them have a religious background. This is Tet (Chinese New Year), and the two-day Buddhist festival Bun Pha Vet (in January-February), and Bun Bang Fai - a rocket festival (in May), timed to coincide with the beginning of the rainy season and originating in a pagan fertility cult.