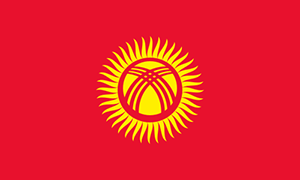 The flag of Kyrgyzstan is a rectangular panel of red color, in the center of which there is a round solar disk with forty divergent rays. Inside the solar disk, a tyundyuk (cross on the dome) of a Kyrgyz yurt is depicted in red. 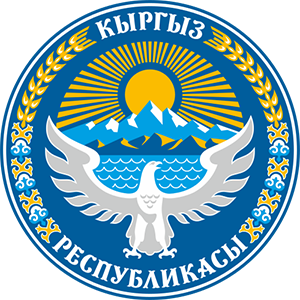 The coat of arms depicts a white gyrfalcon Akshumkar, an ally of the epic hero of the Kirghiz - batyr Manas. It symbolizes the freedom of the country. Also inscribed in the circle is the image of Lake Issyk-Kul, surrounded by the Ala-Too ranges. On both sides, the composition is framed by ears of wheat and white cotton bolls.

Applying for a visa to Kyrgyzstan

Russians do not need a visa.

How to get to Kyrgyzstan from Russia on your own

Moscow and Bishkek are connected by regular flights of Kyrgyzstan Airlines, S7 and Aeroflot.
News
ПУБЛИКАЦИИ

Kyrgyzstan is located in Central Asia and borders on Kazakhstan, Tajikistan, China and Uzbekistan. Almost three-quarters of the territory is occupied by mountains. The highest of them, opened during the Second World War, is called Victory Mountain. In the north of the republic, the foothill Chuya depression extends. This is the most densely populated part of Kyrgyzstan.

One of the deepest and most beautiful lakes in the world, Issyk-Kul, is located in the Tien Shan mountains.

Interesting fact: Scientists have proven that Issyk-Kul is part of the Pacific Ocean and is connected to it by underground rivers.


The sun almost always shines in Kyrgyzstan. The air here is dry, and there are an average of 247 sunny days a year. At the same time, the climate in different regions of the republic depends on their geographical location. In the highlands of the Tien Shan it is subpolar, in the southern part of the Ferghana Valley it is subtropical, and in the northern foothills it is moderate. The coldest month is January. At this time, the western wind brings heavy rains, thunderstorms and snowfalls, and the temperature ranges from minus one to minus eight degrees in the valleys and reaches minus 18–27 degrees in the highlands.

It is best to come to the country in spring, during the flowering period, and in autumn, when fruits and vegetables ripen.

Spruce, juniper and walnut-fruit forests rise on the slopes of the mountains. The Tien Shan cherry, which is characteristic only for this area, grows here, barberries, almonds and Dzhungarian hawthorn are found. Edelweiss, dandelions and alpine asters bloom in the alpine meadows.

Dozens of fish species live in the rivers. The gray heron and the red-winged flamingo live near the reservoirs, and the Red Book three-toed woodpecker flies here to drink. In the mountains you can see the Tien Shan brown bear and the snow leopard, and on the plains - the manul and the goitered gazelle.

The first settlements on the territory of modern Kyrgyzstan arose in the second century BC. Basically, these were unions of nomads. In the 6th-7th centuries, Kyrgyzstan was part of the Western Turkic Khaganate, after which the lands began to belong to the kingdom of the Karakhanids. In the Middle Ages, before the invasion of Genghis Khan, the Turkic Khanate flourished. After the October Revolution, the republic became part of the Soviet Union, and gained independence only in 1991. The Kyrgyz are very sensitive to history and consider the acquisition of statehood to be a more important date. According to Chinese chronicles, in 2003 the country celebrated its 2200th anniversary.

The Kyrgyz rites, passed down from generation to generation, are a complex set of rules. Local customs are closely related to the stages of a person's life. For the right to look at a newborn child, parents are given gifts, and in order to protect the baby from the evil eye, special amulets are sewn to the cradle. Weddings to this day are accompanied by magnificent celebrations, and a ransom is given for the bride - “kalym”. In turn, the bride's relatives prepare her dowry.

The Kyrgyz national dress deserves special attention. Men wear quilted “kementai” robes, and women wear camisoles with short sleeves, over which they put on an “ichik” fur coat in winter.

One of the main traditions in the country is hospitality. Here it is customary to say that "a guest is the grace of the house." Therefore, the traveler is offered the best - food, bed and everyone's attention.

Decorative and applied art of Kyrgyzstan can be attributed to the historical heritage. These are traditional dwellings - yurts, and painted "shyrdak" carpets, and carved dishes and bowls made of wood. Narrators and singers of folk ballads and legends are highly respected (the most revered of them are called "manaschi"). Ballads are performed to the accompaniment of the national instrument - komuz. And the largest Kyrgyz epic "Manas" is included in the list of masterpieces of the intangible cultural heritage of UNESCO and is included in the Guinness Book as the most voluminous in the world.

Interesting fact: In the center of Osh is the mountain of the biblical King Solomon. According to the legend, here he spoke with God, the prints of the ruler's knees and forehead were left on the stone.


The Soviet system is the basis of Kyrgyz education. Children study at school for 11 years, the first nine of which are compulsory for all. Military science is taught in the senior classes, and both boys and girls master it. At the end of the school, a nationwide testing is carried out, which allows you to enter the institute. The country's main institution of higher education, the Kyrgyz-Russian Slavic University, is located in Bishkek.

Sports are very popular in Kyrgyzstan, in particular boxing, volleyball, tennis and football. There are many national sports in the country, the most common being kuresh belt wrestling and various equestrian competitions that require dexterity, strength and speed from the participants.

For the beauty of the Kyrgyz landscapes, travelers dubbed the country the Switzerland of Central Asia. There are 80 tourist zones in the republic. Most people come here to get acquainted with the horse-nomadic culture, visit protected forests and see historical monuments. Every year new hotels and hotel complexes appear, the infrastructure develops.

The main entertainment in Kyrgyzstan is "green tourism" and sightseeing. The most beautiful place after Lake Issyk-Kul is the Big Arslanbob waterfall. Ice streams break from the rocks, cutting through the forest silence. To learn more about the culture of the republic, you can visit the Bishkek Museum of Art.

The main resort areas are located near the shores of Lake Issyk-Kul. Local guides offer tourists boat trips, mountain climbing and helicopter tours with an overnight stay in the arms of nature.

In addition to transparent lakes and sandy beaches, Kyrgyz health resorts attract tourists. On the southern shore of the lake there is the best balneological resort in the country - Jetyoguz. Thermal waters and healing mud help restore the nervous system, the functioning of the gastrointestinal tract, and prevent skin diseases. At the Arashan resort near Bishkek, there are springs with clean drinking water rich in minerals. And in the Chui Valley, the largest number of low-mineralized hydrogen sulfide deposits of therapeutic mud was found, which helps to treat rheumatism and diseases of the liver and kidneys.

Interesting fact: There is an “anomalous square” in the southeastern part of the Bishkek Botanical Garden - asters, tulips and other heat-loving flowers bloom there in winter.

Perhaps the most popular place for shopping in Kyrgyzstan is the bazaar in Osh. Shops with fragrant spices, delicacies and works of local artisans stretch for a kilometer along the western bank of the Ak-Bura River.

The art of making felt products has been developed in Kyrgyzstan since ancient times. Here you can buy not only felt clothes, but even paintings. Figurines made of horns or animal bones and Saimaluu-Tash scarves are no less popular with tourists.

In small family cafes, you should definitely try local cuisine. One of the most ancient is tash-kardo. This is lamb marinated with spices, salt and onions, which is cooked over a fire in a pit for several hours. Kyrgyz people love sweets. Among the most common desserts are apples with sugar syrup inside.

Fun fact: Bishkek is the only city in the world named after a wooden household appliance. From Kyrgyz, the name translates as “a stick for koumiss.”


Most secular holidays in Kyrgyzstan coincide with Russian ones, while the rest are of a religious nature. Travelers are surprised at how peacefully Christianity and Islam coexist in the country. Despite the fact that more than 80% of the inhabitants are Muslims, Christmas is a public holiday. In March, Novruz is celebrated - the day of the vernal equinox: theatrical performances and folk festivals are held in parks and on the streets, equestrian competitions and games are held at the hippodromes, and everyone is treated to pilaf. During the celebration of the Muslim Eid al-Ayt, families prepare the meat of a sacrificial animal and treat their neighbors and relatives.