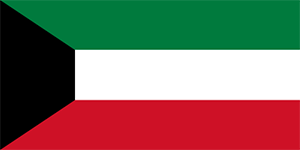 The flag of Kuwait was adopted in 1961 and consists of three horizontal stripes of equal width. The sequence of stripes: a strip of green color is located on top, then white, below it - red. A black trapezoid extends from the base of the flag, occupying 1/2 of the width of the flag. The ratio of the flag's width to length is 1:2. White color symbolizes the desire to work, black - battlefields, red - blood shed in battles with enemies, green color symbolizes pastures. The flag is used on land and at sea as a state, civil and military flag. 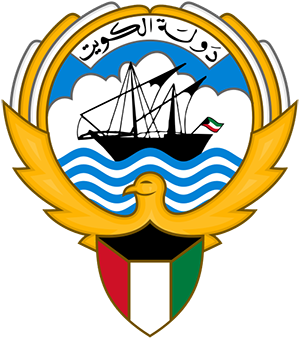 Was adopted in 1963. It is a round shield, in the center of which is a symbol of the maritime traditions of the inhabitants of the country - a dhow with the flag of Kuwait against the background of white clouds in the blue sky and white-blue waves. A white ribbon is depicted above the ship, on which the name of the state "الكويت دولة" is written in black letters. The coat of arms is framed by a golden falcon, a symbol of the tribe of the Prophet Muhammad, on the chest of which there is a heraldic shield in the colors of the state flag of Kuwait.

Applying for a visa to Kuwait

There is a visa regime between Russia and Kuwait. The tourist visa is valid for 90 days.

There are several restrictions for applicants for a Kuwait visa:

How to get to Kuwait from Russia on your own

There are no direct flights from Russia to Kuwait. Convenient connections are offered by Emirates Airlines via Dubai and Qatar Airways via Doha.
News
ПУБЛИКАЦИИ

Precious pearl of the Arab world

Kuwait is an urbanized and dynamically developing emirate, which is conveniently located in the northeast of the Arabian Peninsula and on the nearby islands of the Persian Gulf. In the north and west, the state borders on the Islamic Republic of Iran, in the south - on the Kingdom of Saudi Arabia. It is a country of deserts with moving dunes and occasional oases.

Tropical dry climate of Kuwait does not differ from the climate of neighboring countries of the Arabian Peninsula. The temperature in summer can reach here up to + 47C, in winter - up to + 18C. Precipitation is scarce - up to 175 mm per year, and from June to August they may not be at all, and the north-western winds "shimal" bring sandstorms that can last several days.

The local nature is scarce and unpretentious: camel thorn, kermek, sometimes comes across acacia. Another thing is the oases praised by ancient travelers, in which modern Kuwaitis successfully grow date palms, millet and corn.

More than 30 species of reptiles, about 50 species    mammals and more than 270 species of birds, most of which are migratory. Coastal waters of the country are rich in fish and seafood. Sardine, tuna, sea turtle and sea predator - shark are found here.

For more than a hundred years, Kuwait was under the protectorate of Great Britain, and at the beginning of the 20th century the country was recognized as one of the poorest in the world.

Its Kuwait gained independence in June 1961, and twenty years later, thanks to oil production, the standard of living here became one of the highest.
A difficult period in the history of the country began on August 2, 1990, when Saddam Hussein occupied Kuwait and declared the country the nineteenth province of Iraq .
The United States intervened in the situation, creating an international coalition, whose actions were supported by the Soviet Union. As a result, in February 1991, Kuwait was liberated, but the occupation practically ruined the country. During the retreat, the Iraqi army completely destroyed the infrastructure, blowing up oil rigs and oil pipelines - and Kuwait was literally in ruins. But already in the 2000s, the country recovered. In 2007, the emir took an unprecedented step in world history, forgiving the citizens of the country loans totaling one billion dollars.

Many ancient Arab traditions are still alive, especially in family life and everyday life. Among them are the marriage price and polygamy.

Interesting fact: Kuwait is one of the few countries in the Arab region where divorce is legal. Until a divorced woman gets a job, she will receive a monthly allowance of 1.5 thousand US dollars from the state.


Indigenous Kuwaitis make up about a third of the country's population, they lead their own from the nomadic Beni Athaban tribe, who came from Central Arabia at the beginning of the 18th century.  It is the descendants of this tribe that are citizens of the country, and the remaining 2/3 have the status of non-citizens. As a rule, these are foreign specialists and workers who live in the country on work visas or with a residence permit. Kuwait is one of the few countries whose citizenship cannot be obtained by immigrants from other states.

The sights of the country are primarily the capital of Kuwait with excellent museums and mosques, the most majestic of which is Al-Khalifa, built in 1714 year. The architecture of the Emir's Old Seif Palace, built in 1880, and the Great Kuwait Towers are interesting. The latter have become a real hallmark of the country.

Education in Kuwait, from school to higher education, is free. And if in 1936 the country had  only 2 schools, now there are more than 1000. Kuwait University, opened in 1966, is rightfully considered the best educational institution in the Persian Gulf.

Interesting fact: A Kuwaitis who wants to study abroad can count on full state support. The country's budget guarantees him a scholarship, pays for tuition and flights to the place of study.


Medicine in the country is also free and of a fairly high level - like education. In situations where local doctors are powerless, all expenses for treatment abroad are covered by the state.

Sport is very important in the life of Kuwaitis. The inhabitants of the country are massively in love with football, water sports and the traditional Arabs - falconry and camel racing. The latter are held from October to April.

Fun fact: In camel racing, everything depends on the weight of the jockey - the lighter it is, the more chances to win. Therefore, for more than one century, almost everywhere in the East, boys from 4 years old were used as jockeys. In the 21st century, they found an alternative - small robot jockeys. They are fixed on the backs of animals, and the owner controls such a “miracle of technology” with the help of a remote control.


Kuwait is not one of those countries that you strive for for the sake of works of art and the ruins of ancient cities . But if you want to see the civilized Arab world, then Kuwait should be on the list first. Here, a five-star hotel is adjacent to an ancient mosque, and in a modern supermarket you can buy haute couture and oriental sweets.

One of the best resorts in the country is Khiiran. It is located 120 km from the capital. Resorts in the area of Ardiyah and Safat are in demand among tourists. In Salmiya, under the guidance of an instructor, you can try your hand at searching for pearls. All beach areas of Kuwait are good for both swimming and diving.

When visiting Kuwait, you need to stock up on international medical insurance. However, first medical aid to foreigners will be provided free of charge, but you will have to pay for subsequent trips to the doctor.
In Kuwait, you can buy almost everything that you like and have enough money for!  There are no railways in the country at all, but public transport is well developed and consists of numerous buses and taxis.

Interesting fact: There are three types of taxis in Kuwait: orange cars that can be "caught" on the street, as well as taxis and minibuses by telephone order.


The Havalli metropolitan area is sure to attract the attention of tourists with many jewelry stores, and jewelry here is sold by weight. In the Salmiya area, you can find both modern shopping centers and ordinary markets where you can  buy everything much cheaper. The main thing is to observe the first rule of the East - to bargain!
The national cuisine of Kuwait is traditional for the Arab countries. A lot of different meat (except pork), fish and seafood, vegetables and, of course, spices. The basis of many dishes is khomus pasta.

All public holidays are celebrated here according to the traditions of Islam. Among the main ones are the holy month of Ramadan, Eid al-Fitr, Ghadir-Hom. Kuwaitis also celebrate February 25-26 - Day of Liberation from Iraqi Occupation.