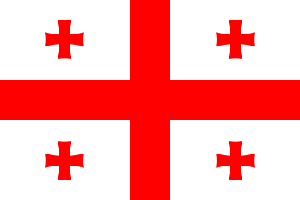 The five crosses on the flag of Georgia symbolize Jesus Christ and the Evangelists. White is a sign of wisdom, purity and purity, and red is courage, love, justice and courage. 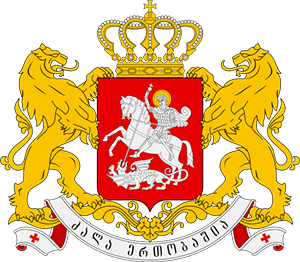 In the center of the coat of arms of Georgia, on the shield, is depicted St. George, striking a dragon with a spear. The motto of the state "Strength in unity" is inscribed on the ribbon. The coat of arms is crowned with the golden crown of the royal family of Bagrationi.

Applying for a visa to Georgia

For short-term trips for tourist or personal purposes, a visa to Georgia is not needed. For a long-term stay, you will need to apply for an immigrant visa at the Georgian Interests Section at the Swiss Embassy in the Russian Federation in Moscow.

How to get to Georgia from Russia on your own

The fastest and most convenient way is by plane. Direct flights to Tbilisi fly from Moscow. Regular buses also run from the Russian capital and other cities of the country to Georgia.
News
ПУБЛИКАЦИИ

Georgia is located in the western part of Transcaucasia, at the junction of the Aral-Caspian depression and the continental highlands of Western Asia. It borders with Russia in the east and north, with Armenia and Turkey in the south, with Azerbaijan in the southeast. The highest point is Mount Shkhara.

This is a mountainous country. In the north are the ridges of the Greater Caucasus, and in the south - the Lesser. On the coast of the Black Sea, the relief is low-lying-flat.

The climate in Georgia is predominantly subtropical. Most precipitation falls in winter, summer is hot and sunny.

Without leaving the country, you can get into different seasons in a few days. When the thermometer shows 40 degrees of frost in the mountainous Samtskhe-Javakheti in winter, behind the mountains, in Adjara, palm trees turn green and the air warms up to more than 20 degrees Celsius.

More than a third of the country's territory is occupied by forests, which can be both tropical and boreal - more characteristic of the northern hemisphere. The forests are inhabited by brown bears, wolves, jackals and snow leopards.

The lands of the Kartvels are not only beautiful, but also fertile. Almost all fruits and vegetables grow here, except for bananas. Some archeological excavations testify that the peoples living on the territory of Georgia started wine-making more than 8000 years ago, earlier than anywhere else.

There are about 25 thousand rivers and tributaries in Georgia, but most of which are less than 25 kilometers long. The vast majority of rivers are fed mainly by mountain glaciers and groundwater.

Interesting fact: The longest river in Georgia is the Kura (Mktvari in Georgian), its length is 1364 km. It originates in the east of Turkey and flows into the Caspian Sea.


The first settlements on the territory of modern Georgia appeared at the turn of the 2nd and 1st millennia BC. Here was the great Iberian kingdom, the Armenian state and even the emirate. As a separate entity, Georgia began to take shape in the 10th century AD. The country reached its peak of development in the 12th-13th centuries during the reign of Queen Tamara. Georgia's Independence Day is June 26, 1918, when the country's first democratic government declared independence. The Georgian Democratic Republic existed until February 1921, but the memory of it is still kept in the country. The state gained its final independence in 1991, after the collapse of the USSR.

Representatives of many nationalities live on the territory of Georgia. The largest ethnic group is Georgians, followed by Armenians, Azerbaijanis and minorities. All of them influenced the culture of the country.

One of the main traditions of Georgia is hospitality. Guests are loved and respected here. The traveler who sees wedding traditions and national dances will be unspeakably lucky.

The most famous dance is kartuli. It is performed in pairs by a man and a woman dressed in traditional Georgian clothes. With special trepidation in Georgia, they treat the creation of national costumes, they pay attention to every detail. Georgian polyphonic singing, which is performed to the accompaniment of national musical instruments, is world famous.

Since the Middle Ages, philosophy, poetry and historiography flourished in Georgia, architecture, astronomy, geography and other scientific disciplines developed.

Education in the country began to develop in the XVII century. Then its center was the Gelati monastery, which was not inferior to the universities of Paris and Bologna. The modern education system has changed many times. Today Georgian schoolchildren study for 12 years. Each first grader receives a netbook for recording and doing homework. To enter the university, you need to pass the Unified National Examination. Higher education in the country is paid.

Of the sports in Georgia, football, basketball, rugby and weightlifting are popular. But the main sport here is wrestling. "Chidaoba" - that's what it is called in Georgian - even received the status of "national significance" as a monument of intangible culture.

Many outstanding people were born in Georgia: artist Niko Pirosmani, choreographer George Balanchine, poet Bulat Okudzhava, film directors Mikhail Kalatozov, Tengiz Abuladze and Georgy Danelia, actors Oleg Basilashvili, cardiac surgeon Leo Bokeria and many others. Under the guidance of the Georgian sculptor Zurab Tsereteli, the Cathedral of Christ the Savior was built in Moscow. The same author created a monument to Peter I. And the Georgian ballerina Nina Ananiashvili was included in the list of the twelve greatest ballerinas of all time.

In recent years, more and more tourists have come to the country. This is largely due to the development of infrastructure: cities are being updated, new resorts are being built. In addition, many are attracted by "green" tourism. The most popular among travelers is the ancient and located between the mountains of Mtskheta and, of course, Kakheti, where many attractions are concentrated - the Alazani Valley, Kvareli, the Alaverdi Cathedral and the ancient cave monastery of David Gareji.

The most popular resorts are located on the Black Sea coast. seas in the Adjara region. In Batumi, you can not only lie on the beach, but also visit the National Botanical Garden and the fortress of Queen Tamara. You can relax from the hustle and bustle in the small picturesque towns of Kvariati and Sarpi. Fans of winter entertainment come to the Goderdzi ski resort from December to March.

Tuberculosis and bronchial asthma, as well as blood diseases and some vascular diseases are treated in Georgian sanatoriums. This is facilitated by mineral waters and healing rarefied air. The most popular climatic resort is Borjomi. It operates all year round, patients with diseases of the stomach and liver, as well as those who have impaired metabolism come here.

The best entertainment when traveling to Georgia is visiting its sights. Paragliding over the evergreen valleys, a trip to the Kindzmarauli wineries or a trip to the Philharmonic - everyone will find something for themselves here.

Wine and cheeses are usually brought from Georgia as a souvenir. For shopping, it is better to go to small city shops. Here you can find products from the famous cloisonne enamel, minankari. A good gift would be a clay vessel for wine - usually such vessels are decorated with national ornaments or paintings with significant historical events.

One of the main attractions of the country is its cuisine. Georgian khinkali, satsivi, kharcho and lobiani are famous all over the world. The culinary tradition of Georgia has absorbed the peculiarities of the cuisines of the peoples of Transcaucasia, Asia and the Black Sea region. The western territories were more influenced by Turkish cuisine, while the eastern territories were influenced by Iranian cuisine. In Western Georgia, they prefer flatbread made from cornmeal - mchadi and poultry, while in Eastern Georgia they love wheat bread baked in huge earthenware jugs and eat a lot of lamb.

Georgia knows how to walk and have fun nowhere. Holidays are celebrated on a grand scale, and Independence Day and Mtskhetoba-Svetitskhovloba (a religious holiday dedicated to the Chiton of the Lord and the Life-Giving Pillar, exuding miraculous myrrh) are also celebrated with special enthusiasm.