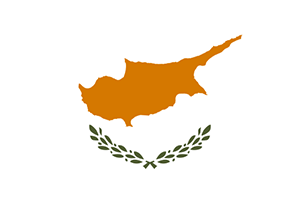 The flag of the republic is a rectangular white panel with a silhouette of the island, under which two crossed branches of an olive tree are depicted. The copper color indicates deposits of copper found in Cyprus as early as 3000 BC. 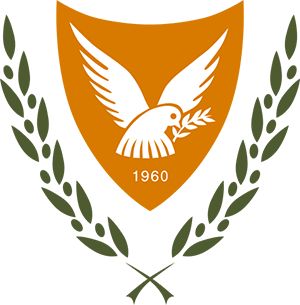 The coat of arms depicts a copper-yellow shield framed by olive branches. The dove carrying an olive branch is a symbol of peace, and 1960 is the year that Cyprus gained independence from Britain.

Applying for a visa to Cyprus


Citizens of Russia and the CIS countries need a visa to travel to the Republic of Cyprus (the Greek part of the island). Those who plan to arrive in Cyprus via Larnaca and Paphos airports can apply for a provisional visa (Pro-visa) category "C" online.

How to get to Cyprus from Russia on your own

The island state of Cyprus is located at the crossroads of Asia Minor, North Africa and Europe. Washed by the Mediterranean Sea. Most of the country is occupied by mountains, they encircle the Mesaoria valley - the breadbasket of Cyprus. The highest point - Olympus - is located in the southwest in the Troodos mountain range.  The largest rivers - Akaki, Pedieos and Yalias - irrigate the surrounding valleys.

Cyprus has a Mediterranean climate. Summers are hot here, winters are mild. Precipitation mainly falls from December to February, when the air on the coast warms up to no more than 15 degrees, and the mountain peaks are covered with snow.

Pine forests, Phoenician juniper and Rock Rose poppies grow on fertile lands. The plains are adorned with olive trees, oleander and flowering bougainvillea, and grapes are grown on the slopes of the mountains.

There are many rare plants and animals on the island. For example, only here you can see the Cypriot cedar or the green Mediterranean turtle.

The local fauna is also diverse. Mouflons, lizards, chameleons and snakes are found in the forests. The island is inhabited by birds of prey - eagles and kites, and in the areas of Troodos there are the Red Book griffin Vultra and Eleonora's falcon.

The first settlements date back to the 4th century BC. Then there were the largest trading cities of Paphos, Salamis and Kition. In the Middle Ages, the state was under the rule of European powers. In 1925, Britain declared Cyprus a crown colony. And only in 1960, after the signing of the Zurich-London Agreement, Cyprus was proclaimed an independent sovereign Republic. Since 1974, as a result of a military coup, the island has been divided into two parts: the southern, Greek, and the northern, Turkish.

Interesting fact: The capital of the Republic of Cyprus is Nicosia. Half of it belongs to the Turkish Republic of Northern Cyprus: the dividing line runs right through the city.


Cypriots are friendly and welcoming, honor their history and keep traditions. With special trepidation they relate to baptism. A four-five-month-old baby is carried to the temple, where the sacrament is performed. After the ceremony, the child is dressed in clothes made of silk, velvet or satin, and all guests are given candied almonds or sweets.

The culture of Cyprus dates back several millennia. There are many ancient monuments on the island. Nine Byzantine churches and even the whole city, Paphos, are included in the UNESCO heritage list.

Ceramic products made and painted by Greek masters have survived to this day. Frescoes by Byzantine artists can be found in cathedrals and monasteries.

Festivals and concerts are held in ancient amphitheaters even today.

period. Characteristic musical instruments are the violin and the lute with four double strings, played with an eagle's or hawk's feather. The peculiarity of Cypriot dances is improvisation and sensual performance.

The education system includes several levels - primary, secondary, special and higher. Teaching is conducted in Turkish and Greek, and in private educational institutions - in Italian, Arabic, French and even Armenian. Upon graduation, students take a state exam, the successful completion of which allows them to continue their studies at the universities of Cyprus or enter higher institutions in Greece, Great Britain and other European and North American countries. The most prestigious is the Cypriot University in Nicosia, and the newest, Neapolis, is located in Paphos.

The most popular sports on the island are football, basketball and athletics. Local athletes successfully perform at international competitions, and the authorities are doing their best to popularize the sport. In winter, residents and guests of the island come to the Troodos mountains to ski, and in summer diving is popular on the coast.

From our famous contemporaries in Cyprus, the scientist Christodoulos Xinaris was born, who managed to grow kidney tissue for the first time in the world, consisting of single cells, and singer George Michael.

Every year, millions of tourists come to Cyprus. You can relax here at any time of the year: in summer - on the beaches of Limassol or Paphos, and in winter - at ski resorts in the mountains.

The island offers guests a lot of entertainment. For fun and parties, it is better to go to Limassol, life here is in full swing from morning to night. In Protaras - watch a show of dancing fountains. Or you can go to the mountain villages, which are famous for their wineries, they arrange excursions with tasting.

Pissouri's pebbly beaches near the National Park are suitable for family holidays, Lunapark or water park will also be a good choice. Swimming and diving enthusiasts will enjoy a trip from two blue lagoons known for crystal clear turquoise waters and rich underwater life.

Fun fact: The crime rate in Cyprus is so low that it makes the island one of the safest places in the world to live.


Many consider Cyprus a shopping paradise. The main trading city of the island is Limassol. In shopping centers you can buy goods of famous world brands, discounts on them during the sales season reach 80%. And traditional markets sell products of local craftsmen.

Not far from the capital of Cyprus is the village of Lefkara, known throughout the world for lace using the Lefkaritika technique. Here you can see how these works are created and buy your favorite ones.

It is impossible to come to Cyprus and not taste the local cuisine. Cypriot cuisine combines the gastronomic traditions of the East and the Mediterranean. Local chefs like to add spices to food - oregano, parsley and garlic, food is generously seasoned with olive oil and lemon juice. The most popular national dish - moussaka - is eggplant baked with meat and tomatoes with bechamel sauce. Cypriot honey, sweet kaydaf vermicelli and baklavas cakes are also served in restaurants and cafes.

Most traditional dishes can be tasted during national holidays. In Limassol, for example, two famous festivals are held - Carnival for Shrovetide and the annual Wine Festival. The events are accompanied by costumed processions, performances in the amphitheaters and performances by singers and dancers.

The most revered holiday on the island is Easter. They start preparing for it 50 days in advance, and at Easter midnight people in festive clothes gather in church to celebrate the holiday together. According to a tradition that dates back to the distant past, bonfires are lit in the courtyards on this night.

Rich culture, ancient artifacts and a wonderful climate make the country one of the most interesting in the Mediterranean for travelers.