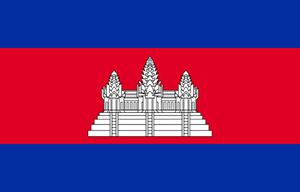 The flag of the Kingdom of Cambodia is a flag with three horizontal stripes of blue and red. The image of the Temple of Angkor Wat is placed on the red stripe.

The blue color of the flag symbolizes the monarchical power, red - the people, white - religion (Buddhism and Brahmanism). The Angkor temple symbolizes the Universe, the highest divine powers and royal power (according to the Cambodian tradition, the monarch is an intermediary between deities and people). Thus, the central symbol of the flag means the triad - Religion-Nation-King. 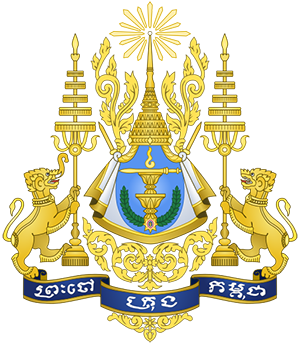 The coat of arms depicts an elephant lion (gajasingha) and a lion (singha) standing on their hind legs. Above - a royal crown, from the top of which a beam of light emanates. Under the crown is a sword lying on a pedestal, above which the symbol of Aum is inscribed. The Khmer inscriptions on the ribbon at the base of the coat of arms read: preah'jao (royal ruler) - krung (kingdom) - Kâmpŭchea (Cambodia). Thus, the whole phrase is translated as "King of the Kingdom of Cambodia".

Applying for a visa to Cambodia

Russians can apply for a visa to Cambodia not only through the embassy or the Internet, but also right at the border of the country. This is done at airports and checkpoints bordering Thailand and Vietnam. It should be remembered that, according to the rules, it is impossible to obtain a visa on the spot when crossing the border through Laos.

Any of the visas to Cambodia can be extended without the need to leave the state. This is done through the local immigration office for an additional fee or through a travel agency, but then you will have to pay twice or even three times more.

How to get to Cambodia from Russia on your own

You can get to Cambodia by air by plane or by bus along the roads from neighboring countries – Thailand, Vietnam and Laos. .
News
ПУБЛИКАЦИИ

The kingdom is located in the southern part of the Indochinese Peninsula and borders Thailand, Vietnam and Laos. Most of the territory is occupied by plains, they are surrounded by small mountain ranges. The highest point of the country is Mount Oral, its height is 1813 meters. Almost the entire country, except for the coastal strip, is located in the Mekong River basin.

The climate in Cambodia is tropical. The weather depends on the monsoons. The rainy period lasts from June to August, and the dry and hot period lasts from March to May. On average, the temperature during the year does not fall below 25 degrees Celsius. Despite the high humidity, it is very comfortable to relax here in winter, when a light wind blows on the coast.

Almost half of the country is covered with forests. Mangroves grow near the Gulf of Thailand and on the coast of Tonle Sap Lake, and redwoods and rosewoods grow on the hills. Orchids, palm trees and acacias are found everywhere. Lotus flowers bloom on Tonle Sap Lake, which Cambodians consider "a symbol of life." Rare freshwater dolphins live in the Mekong, and Asian marabou and hornbills soar above the water. Monkeys, tigers and elephants live in the forests. And in the Ream Reserve, a small temple dedicated to the zodiac animals was built.

Interesting fact: In terms of the number of fish species, Tonle Sap Lake is second only to the Amazon.


Many centuries ago, the Khmer Empire existed in the territories of modern Cambodia, whose kings proclaimed themselves gods. During the weakening of the empire, neighboring Siam and Vietnam captured large areas of the state. At the end of the 19th century, the country fell under the control of France and became part of French Indochina. The independence of Cambodia was proclaimed in 1953, and in 1993 the government adopted a new constitution, according to which the kingdom became a constitutional monarchy.

Local residents are distinguished by calmness, restraint and deep religiosity. Upon reaching the age of 16, young men go to temples and lead the life of monks for several years, comprehending the basics of Buddhism. When communicating with each other, Cambodians never show anger or anger, this is considered a sign of bad taste. Along with verbal gratitude in this country, it is customary to give small gifts. According to the beliefs of the Cambodians, the soul after death moves into animals, so you should not even kill a midge in front of the locals.


The culture of Cambodia was formed under the influence of Hinduism and Buddhism. Khmer sculpture, which came from India, acquired unique features over time. Temples, decorated with statues of deities, today are part of the treasury of world architecture. The connection between the past and the present reflects the royal ballet, it uses only traditional dances, and the actors dress in colorful national costumes.

School education in the country is divided into several stages. Children study in elementary school for six years, then three years in basic school and three more years in secondary school. Despite the fact that education is free, school supplies are too expensive for many families, so it is not uncommon for children to complete only 3-4 grades. No more than 10% of students go to higher education institutions or colleges.

Interesting fact: In Cambodia, it is not customary to name streets. As a rule, they are simply numbered.


Sports are loved in Cambodia. The most popular game is football. There are several teams in the country that compete at the Asian Games. Young people often play sepak takraw, a rattan ball traditional in Southeast Asia.

Cambodia is one of the most interesting and accessible countries for travel. People come here to see local attractions, relax in the resort of Sihanoukville - dive to the seabed, see coral reefs and wrecks - or go to the Gulf of Thailand for deep sea fishing.

Cambodia's main tourist attraction is the Angkor temple complex, which is considered the largest religious building in the world. It was here that the movie "Lara Croft: Tomb Raider" was filmed.

Interesting fact: There are no traffic rules in Cambodia. Priority is given to the larger vehicle.


The health care system in the country is poorly developed. Many locals do not accept modern methods of treatment. Khmers believe in spirits, for healing they perform rituals of sacrifice. If a person is very ill, then the locals turn to monks who speak Sanskrit, read ancient manuscripts and use secret methods of alternative medicine.

As a souvenir from Cambodia, you can bring products made of bronze, mahogany and shells . The best place for shopping is the markets. It sells Cambodian silk, marble and clay works. However, you need to be careful when buying jewelry: glass is often sold to travelers under the guise of jewelry. Of the edible souvenirs, Cambodian pepper and coffee can be noted - they are of such high quality that many world restaurants often buy them.

Cambodian cuisine is exotic. The most unusual of the local delicacies is the tarantula, which tastes like a mixture of chicken and cod. Rice among Cambodians is truly “the head of everything”, almost all dishes are prepared on its basis. They love seafood here, but they rarely eat meat. Among the most popular dishes are fried fish with vegetables and sweet sauce "tray thien tu goaem" and local "felay" cookies.

Holidays in Cambodia are very peculiar. One of them is Prochum Ben, the day of the dead. On this day, the inhabitants must leave rice as an offering in the temples, otherwise they face a curse. The kingdom cheerfully celebrates the New Year and Chnam Tmai, which falls at the beginning of the monsoon season. In the spring, when rice is harvested, the “Water Festival” is held, accompanied by colorful processions and ritual dances.