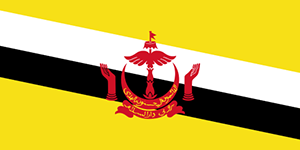 The yellow color on the flag of Brunei is traditional. The mast, bird wings, umbrella and pennant are symbols of power. The hands represent concern for the well-being of the people. The Arabic inscription on the crescent reads: "Eternal service to Allah." At the bottom of the ribbon is another inscription: "Brunei - the abode of peace", which is the motto of the Sultanate. 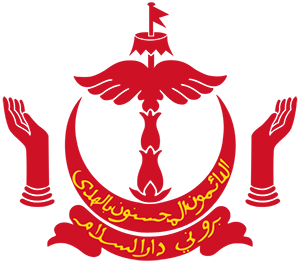 The emblem consists of five main elements: a flag, a royal umbrella, a wing, arms and a crescent.

The national motto is written in Arabic on the crescent: "Always in the service under the guidance of God." The wings symbolize the protection of justice and peace. Below them is a crescent moon, which is the symbol of Islam. The hands symbolize the duty of the government to protect the people.

Applying for a visa to Brunei

Russian citizens need a visa to visit the country. You can apply for it at the consular section of the Brunei Embassy. The visa is issued for three months. If the passport contains a mark about visiting Israel, then a visa may be denied.

How to get to Brunei from Russia on your own

Air travel. There are no direct flights from Russia to Brunei. Some airlines offer flights with transfers, but such a journey will take at least a day and will include at least two transfers. There is an option to see the kingdom without a visa - in transit. In this case, you need to cross the border only by air and only by Royal Brunei Airlines.
News
ПУБЛИКАЦИИ

abode of the world

Brunei is located on the northwest coast of the island of Kalimantan. The entire territory of the state is divided into two parts by a 30-kilometer section of Malaysia, the only country with which Brunei borders.

More than a third of the population lives in the capital, and the other significant part lives in the oil fields.
< br> The Sultanate is warm all year round. Daytime temperatures rise above 30 degrees Celsius during the hottest months. The climate is predominantly equatorial, in some regions turning into a tropical one. Due to the high humidity, the air temperature seems to be higher than it actually is. Wet and dry seasons do not stand out, it rains throughout the year. Winter is considered the best time to travel to the country.

The western part of the country lies on a hilly lowland, the eastern part is a coastal plain. In the jungle, tourists are surprised by the beauty of waterfalls playing in the sun. Coconut palms and agar trees of tropical forests blend into the mangroves of the coasts.

Clouded leopard, Bornean gibbon, banteng and many other animals and rare birds listed in the Red Book live in the forests.

The territories of Brunei were inhabited as early as the 8th century AD, but an independent sultanate was formed only in the 14th century. The first ruler was Muhammad Shah. Under him, the state prospered. Local merchants were actively trading with other countries, in particular with China. From the 16th to the 20th century, Brunei was under the influence of European powers, and received full independence only in 1984. In 1992, the principles of the "Islamic monarchy" were formed, according to which the laws of Islam became the key to effective development. Under Sultan Hassanal Bolkiah, who has ruled the country since 1968, it has become one of the richest in the world, earning it the nickname "Islamic Disneyland".

Interesting fact: There is no public transport in Brunei. Every inhabitant of the country owns a car.


Although the traditions of the country are determined by Muslim culture, women here freely walk in European clothes, drive a car and even participate in public life. This speaks of the indulgences made in the era of modernization. At the same time, bright colors, especially yellow, are the prerogative of the Sultan, subjects wear clothes of muted shades. Eating pork and drinking alcohol is prohibited in the country, and the distribution of drugs is punishable by death. The Brunei do not even try to participate in the political life of the country, the ruler takes care of everything. Every birthday, he gives gifts to all his subjects, and once a year he pays for the Hajj - a pilgrimage to Mecca.

You can explore the local culture by visiting the Brunei Museum. To appreciate the national painting and architecture, you should go to the Sultan's Palace: once a year, in Ramadan, the doors of the residence are open to everyone. A shadow theater is successfully developing, dolls for which are made from buffalo skin, and music. In addition, the Brunei people keep and pass on from generation to generation the secrets of making original products from copper.

Education in the country is free and is divided into several levels. The education system is not the same for the children of the English colonizers and the indigenous population. However, elementary school is compulsory for everyone. Upon graduation, expat children go to an 8-year high school and must study for another two years to enter the institute, and the children of the natives take a six-year high school course, after which they pass exams for entering a higher educational institution. The best graduates who have passed a tough selection can go to study anywhere in the world.

Interesting fact: Christmas is forbidden in Brunei. A public celebration is punishable by a fine or imprisonment.


The country pays great attention to sports. There are several complexes with swimming pools and gyms in the capital. National sports are cultivated - sepak takraw (team ball game, somewhat similar to volleyball), local martial arts and board games chongkak and mein pasang. The national team has been representing Brunei at the Olympic Games for many years.

In recent years, tourism has been actively developing. Hotels are being built on the coasts, excursion routes are being developed, and the infrastructure of cities is being improved. Many come here to feel the culture of the East. As a rule, they begin to get acquainted with the country with a visit to the mosque of Omar. The building is surrounded by artificial lagoons, the walls of the mosque are built of white marble, and the structure is crowned with a dome of pure gold. Then you can go to Kampung Ayer - one of the districts of the capital. Its uniqueness lies in the fact that all the houses along the banks of the river Sungai Brunei are built on stilts.

The most popular resort in the country is Tutong. Ideal beaches, natural reserves, cozy restaurants with seafood make this area the best place to relax.

Meanwhile, most hotels are not located on the coast, but in the capital of Brunei. The most expensive hotel in the world, the Empire, is located here. The entire interior decoration is made of gold, the ceilings are decorated with crystal chandeliers, and only silverware and Limoges porcelain are used.

Travelers should remember that Brunei is a Muslim country. In order not to cause condemnation of the locals, you need to dress modestly here, hiding most of the body. It is not customary to point at something with a finger and to give a greeting with the left hand - it is considered "unclean". It is not necessary to raise your voice to attract attention, just wave your hand with an open palm.

In addition to being one of the safest states in the world, the Sultanate has one of the best healthcare systems. All regions have public hospitals, and for those who need specialized treatment, there are several private clinics. One of the most famous is in Jerudong Park.

Interesting Fact: < b>The Sultan of Brunei is the richest ruler in the world. His fortune is estimated at 22 billion dollars.


For souvenirs, it is better to go to the city market. An original gift can be a bright fabric with an unusual pattern. In the shops of jewelers, you should take a closer look at oriental-style jewelry made of precious metals and precious stones.

In local markets, you can not only buy a present, but also try local cuisine. The cuisine of the country is quite peculiar. The basis, as in many eastern states, is rice, but in Brunei it is customary to mix it with boiled green beans and a lot of sauce. The Brunei diet consists of poultry and seafood. Some of the most popular dishes are ayam penye, chicken in a spicy herb sauce, and petai, a shrimp and green bean stir-fry. Sweets, exotic fruits and fresh fish are sold at the capital's night market.

One of the most important holidays in Brunei is the Sultan's Birthday. Colorful festivals and sports competitions are held everywhere, and hundreds of fireworks volleys light up the sky. The celebration of the New Year is mainly focused on tourists who are fascinated by the incredible beauty of the costumes of the participants in the processions.