Bhutan is the capital of Thimphu. Asian countries | Bigasia.ru 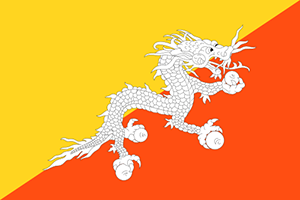 The flag of Bhutan is diagonally divided into two parts, the top left is orange-yellow and the bottom right is orange.
In the middle of the flag of Bhutan is the emblem of a white dragon facing to the right. The dragon holds jewels in its claws, which signifies the wealth of the state.
The snarling mouth of the dragon represents the strength of the people defending their country. The orange represents the Drukpa monasteries and the religion of Buddhism, while the orange-yellow represents the secular power of the king.
The color white stands for purity and devotion. 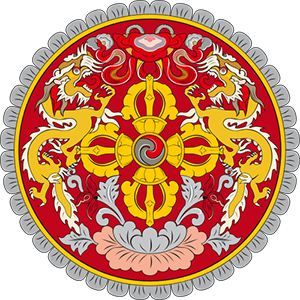 The coat of arms consists of a double vajra depicted in the center, denoting the harmony between secular and religious authority. On either side of the vajra are dragons. Lotus flowers shown below  - a symbol of purity, a gem on top means supreme power.

Applying for a visa to Bhutan

visa is issued only to organized tourists traveling in accordance with programs developed by Bhutanese tour operators accredited by the Department of Tourism of Bhutan, or to persons traveling to Bhutan at the invitation of government organizations. Visas are not issued for individual tourists. Any deviation from the guide's routes is prohibited.

How to get to Bhutan from Russia on your own

From Russia to Bhutan can only be reached with a transfer - in Delhi, Mumbai, Singapore or Kathmandu. Only three airlines have the right to land at the only international airport in Paro - two domestic and one Tibetan.
News
ПУБЛИКАЦИИ

The kingdom is located on the inaccessible southern slope of the Himalayas between China and India. From north to south, the Rinak Range divides the territories into Western and Eastern Bhutan. The country borders China to the north and northwest and India to the east and southwest. Bhutan has no access to the sea. The predominantly mountainous and wooded terrain of the state is due to its location in the Eastern Himalayas. There are a large number of high mountains on the territory of the country, 19 of which have a height of more than 7000 meters. The highest point is Mount Jomolhari. Not far from it stretch the most fertile lands and reservoirs of Bhutan.

Depending on the height of the area, the climate of the country also varies. Despite its small territory, it is very diverse and, like in many Asian countries, is influenced by the monsoons. In the north, the minimum amount of precipitation falls and the air is dry. In summer, the temperature does not rise above +10 degrees, and winters are quite cold - up to -10 ... -15 C. In the south, closer to the borders with India, a hot and humid climate prevails and the average temperature in summer is +30 degrees. The climate of the central region is close to European, but the location at an altitude of 2200 meters above sea level affects the daily temperature drops - they can be up to 25 degrees.

The nature of one of the most mysterious countries of the East will surprise you with almost untouched forests that occupy % of the area and rich wildlife. More than a quarter of the territories belong to nature reserves. Magnolias, mimosas and mangoes grow in tropical evergreen forests, which are adjacent to giant bamboos, vines and chestnut trees. Himalayan meadow grasses and flowers grow in alpine meadows, and more than 46 varieties of rhododendron are found in temperate forests. In the vastness of Bhutan, you can meet 770 species of birds, for many of which the country is a wintering ground. Asian elephants, gaurs, and clouded leopards live near the southern borders of the Himalayas, and closer to the northern slopes in the thickets of forests you can meet snow leopards, Bengal tigers, Himalayan red raccoons and pandas. 2nd century BC
Today, the history of Bhutan is little studied. The reason for this is not only the fact that the country is practically closed to foreign visitors, but also the fire that occurred in 1827 in the main library of the kingdom, as a result of which all archival documents burned down. The first king of Bhutan was the Tibetan monk and artist Ngawang Namgyal, who unified the state and began building dzongs. After his death, Bhutan plunged into military conflicts for several hundred years, after which, in 1907, Ugyen Wangchuck - the First King again united the kingdom and established a dynasty that still rules today.


On culture and traditions Bhutan is heavily influenced by Buddhism, which is practiced by over 75% of the population. Here, the state is not separated from religion, and by law, the subjects of the kingdom must wear national clothes in all public places. Bhutanese are hospitable and modest, sometimes even shy and shy. Weddings are not celebrated on a grand scale, and a symbolic scarf is considered a traditional gift. At birth, a horoscope is drawn up for a person, which determines the fate of a person and the rituals that he should perform throughout his life.

Science and art of the country are connected with religion no less than traditions. Every month there are colorful festivals with dances and musical performances. Bhutan is known for its woodcarving, bamboo products, and embroidery, and the Nyingma and Drukpa Kagyu schools of Tibetan Buddhism are considered the most important arts. In the East, national costumes are spun from raw silk.
Folk music is performed on the national instruments lingma, dranjen and chivanga. Not only art, but many everyday items are made the same as they were hundreds of years ago, and craftsmanship is inherited.

Interesting fact: Bhutan is the only state in which human happiness is at the forefront of domestic policy - this is done by a special Ministry of Happiness.< /b>

Great attention is paid to education in the country. School education is free and takes 13 years, including 5 levels. Due to the remoteness from the villages, many schools operate as boarding schools. At the end of the first degree of education, the best students are sent to study abroad, and there are a lot of people with European, American or Japanese education. Almost all the inhabitants of the country speak English well.

The most favorite sport of the Bhutanese is archery. The main competition in this discipline is held during the New Year holidays. The exact date is determined by an astrologer, and in preparation, teams often hire shamans to cast spells on the enemy. The most popular in recent years are cricket, volleyball, basketball and tennis. The Bhutan cricket team is considered the best in the region.


The culture of Bhutan has given the world many architectural monuments. But, most importantly, she preserved her way of life and traditions, passing them on from generation to generation and remaining a mystery to the whole world around her.

An interesting fact: In Bhutan, it is not customary to bury dead people, as is done in most other countries - the best way to see the deceased here is to feed his body to birds and wild animals .

For many years the world did not know about the existence of Bhutan and the doors to this amazing kingdom were opened only in 1974. It is forbidden to travel around the country on your own, and you can get here only by buying a tour from one of the local travel companies. The cost of staying in the kingdom starts at $200 per day, which includes $65 in duties that go to the improvement of the country. During the tour, travelers can see the incredible beauty of monasteries and temples, visit nature reserves and museums.

There are no open resorts in the country, but hotels provide a full range of spa treatments and relaxation programs. When visiting sights, you need to remember that photography is prohibited in museums and on the territory of some monasteries. The Bhutanese themselves are very friendly and enjoy posing in front of the camera. An extensive excursion program and the possibility of climbing mountains make holidays in this country even more attractive.

Interesting fact:< /span> The importation of cigarettes into the country is strictly prohibited. The fine for smoking is 175 €. But these rules do not apply to tourists. Travelers are only forbidden to sell/give away cigarettes to the local population.


Since the country's tourism infrastructure is just beginning to develop, there are no treatment centers separate from hotels. There is only a system of state hospitals in the country, where, if necessary, a tourist will be provided with medical care completely free of charge. & nbsp; The hotel spa centers offer traditional Tibetan techniques, physical exercises and meditation aimed at achieving harmony between body and soul.


”, wooden bowls “dappa” and local textiles. Bhutanese textiles are one of the areas of local art. Each village and even family has its own kind of clothing design and original ornament. The market in Thimphu offers a rich choice - here you can find jewelry, amulets, ritual masks and even sabers. When making purchases, it is worth remembering that in Bhutan, unlike many eastern countries, it is not customary to bargain - local residents may take an offer to bargain as an insult.

Interesting fact: There are no traffic lights in the capital of Bhutan.

At all holidays, guests are treated to national dishes, which are especially spicy. The basis of all dishes is rice, which is usually served with various variations of vegetables and sauces. Locals believe that those who have not tried "ema-datsu" have not felt the atmosphere of Bhutan at 100%. The dish is hot pepper pods stewed in oil, served with cheese sauce. Dairy products are used for food, and meat is extremely rare, as religion forbids killing animals. Meat dishes are prepared only from semi-finished products, which are imported from India or from the meat of animals that died of their own death or were slaughtered by Hindus with special permission.


Bhutanese holidays and festivals depend on astronomical observations, and therefore from dates change from year to year. The brightest and most colorful Tsechu festivals are held in dzongs once a year. During their holding, many events are held, which are accompanied by colorful performances, dances and religious rites. Bumthang Tsechu, Paro Tsechu and Thimphu Tsechu are considered the most popular festivals in Bhutan.

Today Bhutan remains one of the most mysterious countries that tourists from all over the planet seek to get to. Hidden from millions of eyes, the kingdom causes great interest and desire to discover this amazing and wonderful world of happy people.