The capital of Afghanistan is Kabul. Asian countries. | Bigasia.ru 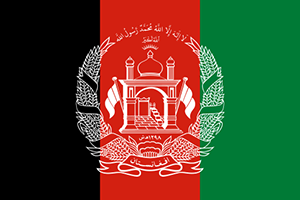 On the flag of the Islamic Republic of Afghanistan, the black color of one of the vertical stripes is the color of historical and religious banners, red is the supreme power of the king and the struggle for freedom, and green is the color of hope and success. Above the mosque in the center of the coat of arms is inscribed: "There is no deity but Allah, and Mohammed is his prophet." 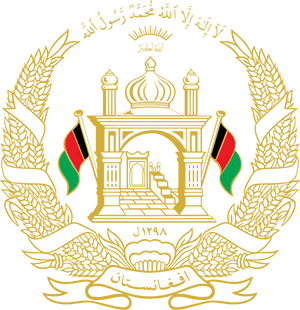 The coat of arms is inscribed with the date of the Islamic calendar 1298, which corresponds to 1919 of the Gregorian calendar (according to which the modern world lives), when the sovereignty of the country was proclaimed. Upstairs  - shahada (it is also on the flag of the state), evidence of the Muslim faith, and below - the words "Allah Akbar". The drawing of the mosque symbolically faces Mecca.

Applying for a visa to Afghanistan

Tourists from Russia are granted a single entry visa to Afghanistan for a period of 30 days. You can apply for it at the consulate. You can extend your visa in the country itself, but a fine will be charged for each additional day.
There is one peculiarity: photography and video shooting in the country is possible only after obtaining special permission from the Tourism Department of the Ministry of Culture and Information of Afghanistan.

How to get to Afghanistan from Russia on your own

The most convenient option is regular direct flights from Moscow, operated only by Ariana Afghan Airlines.
News
ПУБЛИКАЦИИ

Afghanistan is little explored by travelers. It is located in the northeastern part of the Iranian Highlands, framed in the east and west by mountain ranges 3000-4000 meters high. The highest point of the country, Mount Naushak (7485 m) is located within the Wakhan Range. Afghanistan is landlocked and shares borders with Iran, Pakistan, India, China, Uzbekistan, Turkmenistan, and Tajikistan. The Bactrian Plain is located in the north of the country, closer to the Amu Darya River, and the sandy Registan desert and the clayey-sandy Dashti-Margo are in the south and southwest.

Interesting fact: Afghanistan has huge reserves of gas and oil, which are still practically not developed.< /b>


Due to the rich diversity of the relief, different regions of the country have their own climate - from subtropical continental in Jalalabad to mountainous arid in Kabul. In Afghanistan, the amplitude of temperature fluctuations is very high, it changes quickly, and the transitions from winter to summer, from night to day are just as fast. Regions with high humidity are located in the south-east of the country, where, under the influence of the Indian monsoon, up to 800 mm of precipitation falls annually, while in the rest of the territory - no more than 370-400 mm.

On desert landscapes and cereal crops grow in the dry steppes of Afghanistan, and on the slopes of the mountains, interspersed with thorny bushes, wild almonds and pistachios grow, and brightly and luxuriantly blooming tamarix is found. Spotted hyenas, jackals, wild donkeys, swift-footed goitered gazelles and saigas are found here. Irbis, or snow leopards, mountain goats and Afghan tigers live in mountainous areas, in forests of walnut and pomegranate groves.

At an altitude of 2000-3000 meters above sea level, birch, pine, honeysuckle, hawthorn and currant grow and at an altitude of 4000 meters alpine meadows stretch. Predatory kites, vulture hawks, kestrel falcons, golden eagles and Himalayan vultures fly over the expanses of Afghanistan, and catfish, carp, trout and other commercial species are found in rivers rich in fish.

Fun fact: Afghan drug traffickers use pigeons to smuggle drugs across the border.< /b>


During its thousand-year history, the lands of Afghanistan have been part of the Persian state and the Parthian kingdom, the Seleucid empire and the Greco-Bactrian kingdom. The country gained its own statehood only in 1747, after Ahmad Shah Durrani came to power. The country was constantly torn apart by military conflicts, and the struggle for power until the 21st century led to the murders of the current rulers.

Afghanistan is intertwined with the cultural characteristics of its own and neighboring peoples, many languages and historically established rules. There are practically no unified national traditions here - they differ greatly and are special for each tribal group inhabiting the country.

Only Islamic laws unite the people, and their very severe version. In Afghanistan, it is customary to live in large families, which are headed by elders. The head of the clan can decide who will be the chosen one of the girl belonging to the family, to whom he will transfer his rule. Elders also resolve conflicts between tribes. The locals are hospitable, but only to those who do not violate their customs. Women here have no personal freedom and are completely subject to the will of men. One of the local features is the ban on alcohol, but smoking is very developed here. If the owner offered you a cigarette, it means that you have been trusted.

Numerous rock carvings and Buddhist cave temples in the central Afghan province of Bamiyan testify to the centuries-old artistic culture, and the abundance of architectural monuments, palaces and mosques testify to high craftsmanship architects. The literary heritage of Afghanistan - legends, epics - reflect the aspirations of the people and glorious stories about the struggle for independence. The traditional forms of versification are the charbaita and the Arabic ghazal. Charbaita was especially popular in the 19th century, when Nuruddin, Hyp Sahib and other poets composed love and heroic-romantic poems in the Pashto language. During the Independence Day in Afghanistan, you can watch the performance of the atan martial dance to folk music, which is distinguished by a special rhythm and bright melody. The motives of most of the musical works of Afghanistan are similar to Indian and Central Asian ones, they are performed on traditional string instruments - dombra, tambour, setar, on wind instruments - flute and surna, on percussion - drum, dhol and cymbal, on keyboard accordion. One of the newest areas of art is theater. Plays by the world's great playwrights and national works are played in the capital's Kabul Nandari.

Afghanistan's education sector is undergoing a period of formation. Due to national and religious characteristics, as well as due to frequent changes in the political regime, the literacy rate of the population is 34%. In recent years, a plan has been implemented to improve the education system, according to which by 2020 the number of uneducated population should be significantly reduced. However, the problem of gender inequality has not yet been resolved, as a result of which girls are not taken to high school at all. At the moment, there are just over 200 schools and several universities in the country. The largest university centers are located in the cities of Kabul, Kandahar, Herat, Mazar-i-Sharif, Jalalabad.

Interesting fact: There is no official language in Afghanistan. The population of different regions speaks Uzbek, Persian, Turkmen and other languages of the peoples living here.


The locals are very fond of folk sports. For Europeans, some of them may seem rather strange. The most popular are bakhlavani wrestling and Afghan jigitovka with a spear. Dzhigitovka is similar to horse polo, but instead of a ball, a goat carcass is used in the game. Football, volleyball, field hockey and basketball are developing among world-famous sports. The national team has been represented at the Olympic Games since 1993, and at the 2008 Summer Olympics in Beijing, Afghan athletes won a bronze medal in taekwondo. . The brightest of them are Firdousi (X-XI century, author of the famous poem "Shahnameh"), Jami (poet, philosopher and Sufi sheikh of the XV century), Navoi (poet and statesman of the XV century), & nbsp; and Rahman Baba (15th century), Asadullah Habib (poet and public figure of the 20th century), Barek Shafiy (in the 20th century he was a poet and minister of culture of the country). Among the modern authors of Afghanistan, the name of the writer Zahra Yaganah, who created the autobiographical book Hidden Lights, has become world famous.

Tourist opportunities in Afghanistan are still very modest, but its mountains, for example, attract climbers from many countries. One of the safest cities for tourism is the capital Kabul. Here you can visit the magnificent Kabul Museum and Babur Gardens. Those who have received permission to travel around the country can see the 12th-century Jam Minaret, included in the UNESCO World Heritage List, as well as the Cloak of the Prophet Muhammad, which is kept in the Khalkha Sharif in Kandahar.

Tourism in Afghanistan began to develop relatively recent, but the government is making every effort to attract as many visitors to the country as possible. In the capital and large cities, there are hotels with a high class of service, and travel companies offer all kinds of excursion programs. Despite the lack of resorts and health centers, those who wish can privately travel to the valleys and mountains of Bamiyan to ski, enjoy scenic views, visit farm huts and taste the national cuisine of the local people.

Unlike many countries where souvenirs are produced in large quantities, in Afghanistan you can find truly unique products. These include wool carpets handcrafted by local artisans who work on each carpet for months and create masterpieces. Forged candlesticks, ceramics with national ornaments, and jewelry are made by hand. Here you can also buy animal skins. Since ancient times, Afghanistan has been famous for the craft of skinning, so such a souvenir should be brought as a souvenir of this unusual country.

The cuisine of Afghanistan is one of the most ancient on the planet, it has developed under the influence of the culinary traditions of neighboring countries. Many dishes use rice, lamb, beef, poultry. The most famous dish is the local type of barbecue, shish kebab, which is loved not only in the country, but also far beyond its borders. National desserts firni made from milk and pistachios, dozens of types of halva, pumpkin puree pies with various fillings are a gourmet feast. All dishes are served with naan bread, without which no meal is complete. The most common drink is strong tea, which is drunk here in large quantities. Instead of alcohol, they drink a drink similar to koumiss.

Basically, travelers go to Afghanistan not in the hope of finding the usual entertainment, but to admire nature and observe the original culture. The main holidays in the country are religious. Their dates are calculated using the Islamic lunar calendar, so many events do not have an exact date, and the celebration period varies from 2 to 10 days depending on the region. The largest of them are Mawlid an Nabi, Ashura, Eid al-Ada and Eid al-Fitr. These days, official ceremonies, colorful carnivals, competitions and music festivals are held.

One of the most remote countries in the world attracts tourists with its beautiful nature and the possibility of extreme tourism. Afghanistan cannot be called a resort paradise, but it gives an unforgettable experience.