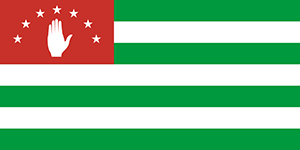 The three white and four green stripes on the flag represent tolerance, allowing Christianity and Islam to coexist in Abkhazia. Red rectangle with palm - flag  Sebastopolis - this was the name of the ancient fortress that stood on the site of the current capital of Abkhazia - Sukhum. An open hand symbolizes the mood for business contacts with neighboring states, promises honesty, decency, help. 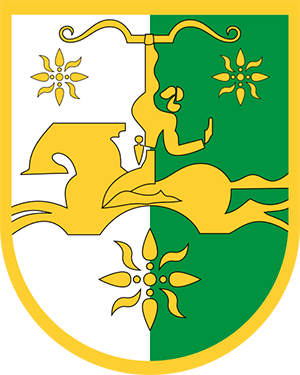 The flying rider on the coat of arms is the Nart (hero) Sasrykva, the hero of the national epic. The big star symbolizes rebirth, and the small ones symbolize the union of eastern and western cultures.

Applying for a visa to Abkhazia

Russians do not need a visa to travel to Abkhazia - it is enough to present a general civil or foreign passport.

The maximum stay in the republic is 90 days from the date of entry.

How to get to Abkhazia from Russia on your own

By ferry from Adler in the summer or by land transport through the checkpoint & nbsp; on the Russian border. From Sochi to Sukhum can be reached by train.
News
ПУБЛИКАЦИИ

The first mention of settlements on the territory of modern Abkhazia dates back to the 7th century BC. They were founded by Greek seafarers and some of these cities have survived to this day. Among them are Sukhum, Gagra and Pitsunda - all three cities were once large seaports where trade flourished.

In the 8th century, the Abkhazian kingdom was formed in these territories, culture actively developed, palaces and temples were built. Christianity flourished in the country, which in the 1st century AD. brought here by the apostles Andrew and Simon the Zealot. It influenced the culture of the Abkhazian peoples, as well as the Silk Road passing here, thanks to which a community arose with the inhabitants of the mountainous regions of the Kuban region.

Almost the entire history of the existence of the lands of Abkhazia were under the influence of larger neighbors. Abkhazia declared independence after the armed conflict with Georgia in 1992-1993, Vladislav Ardzinba became the first president of a sovereign state.

From Russia, you can get to Abkhazia by car or bus through the Psou checkpoint, by train and ferry in the summer . The nearest functioning airport is in Russian Adler.

The original culture and amazingly beautiful nature are the first things that tourists pay attention to when they come to the Land of the Soul, as the locals call Abkhazia. Most of the population lives in rural areas.

The largest city of Abkhazia is its capital. The population of Sukhum is about 65 thousand people. Its streets are lined with palm trees, and the architecture reflects historical periods - buildings from the times of the Soviet Union border on the ruins of ancient Roman citadels from the late 1st century AD. In recent years, Sukhum has been actively restored - monuments are being restored here, new houses and cultural centers are being built, and streets are being illuminated. A favorite pastime of local residents is to stroll along the embankment and drink a cup of coffee on the open veranda of the cafe.

On the sandy cape Gumista there is the Sukhumi lighthouse - one of the main sights of the city. 137 steps lead to its upper platform, from which a panorama of the capital opens. From here you can see the Botanical Garden, in which a huge linden grows - its diameter is 3 meters, and its age is 250 years. The tree continues to live and bloom for everyone's joy, despite the ups and downs of fate - in 1877 the Turks cut it down, and 100 years later, in 1987, a powerful hurricane broke its crown. The oldest sequoia also grows in the park.

Shoppers will not find big stores and branded items in Abkhazia. For souvenirs, you need to go to the clothing markets, where you can buy a cezve - the national likeness of the Turks, daggers, clay products and small crafts made from boxwood and vines.

Abkhazian cuisine is determined by the main occupations of the inhabitants - agriculture and animal husbandry. Here they consume a lot of plant foods, prepare the most spicy adjika and the world-famous hominy - corn porridge. Strong national drink - chacha enjoys special popularity. Since the 19th century, patskhi have been built in the country - courtyard kitchens made of walnut vines, inside which there is a double hearth for cooking.

The Mediterranean and subtropical climate of Abkhazia is due to its location. There are no frosts in this country, the temperature rarely drops below zero, and in summer the Black Sea coast softens the heat, and at +35 degrees a person is quite comfortable. From the north, Abkhazia is protected from cold winds by the Main Caucasian Range, and the southern moist sea breeze enriches the air with oxygen.

coast of the Black Sea, where the water has a special turquoise color.

Abkhaz health resorts are very popular. Not far from Sukhum, archaeologists discovered "Happy Springs" - presumably the first local sanatoriums that were marked on ancient Greek maps. Thermal springs saturate the skin with oxygen and help treat many diseases due to the content of minerals.

Full-flowing rivers and lakes of Abkhazia, buried in shady forests, fascinate with their beauty. In the north, not far from Gagra, the shortest river in the world, the Repura, flows, and to the south, between Gudauta and Sukhum, there is the largest karst cave. The internal volume of the New Athos cave is one million cubic meters.

In the forests, which occupy 55% of the republic's area, many animals and birds live. Not so long ago, they began to restore the population of leopards - they were brought from Iran and raised in captivity, then released into natural conditions. The lakes are home to a variety of fish, the most common of which is trout. Due to the subtropical climate, more than 3,200 species of plants grow in the country, 250 of which are medicinal.

Nature has presented Abkhazia with miraculous sights. Lake Ritsa is considered the most beautiful body of water. It is located in the mountains, at an altitude of 950 meters above sea level. Depending on the season, the color of the water changes from greenish yellow to deep blue. Not only the surrounding landscapes are fascinating, but also the legends associated with this lake - they talk about the beauty and her brothers, about robbers and chases. . The temple complex was founded at the beginning of the 19th century by Greek monks with the money of the Russian Empire. During its history, the monastery was repeatedly ruined, but to a greater extent retained its original appearance.

Abkhazia has contributed to the development of world culture. Alexander Shervashidze (Chachba) became the first professional artist among the Abkhazians. A descendant of the kings was one of the outstanding painters and stage designers of the 20th century. It was he who organized the first art school in Sukhum and throughout his life contributed to the development of the culture of his native country.

Fazil Iskander, a famous Abkhazian and Soviet writer, presented wonderful works to world literature, among which "Sandro from Chegem" (the author attributed it to the genre of a picaresque novel), the story "The Thirteenth Feat of Hercules", the satirical story-parable "Rabbits and Boas".