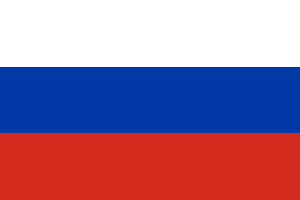 It is a rectangular panel of three equal horizontal stripes: the top one is white, the middle one is blue and the bottom one is red. 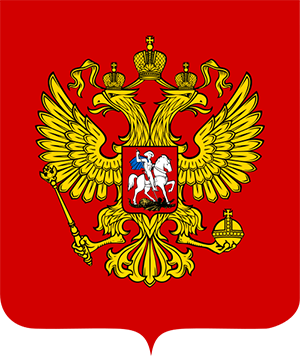 The State Emblem of the Russian Federation is a red heraldic shield with a golden double-headed eagle raising its outstretched wings. The eagle is crowned with two small crowns and - above them - one large crown, connected by a ribbon. In the right paw of the eagle is a scepter, in the left is an orb. On the red shield on the chest of the eagle is depicted a horseman slaying a dragon with a spear.

The Russian climate varies from arctic to subtropical. It can be noted a clear zonality of flora and fauna, corresponding to different climatic zones. The variety of fauna allows you to meet any kind of animal - from wolves and musk deer, hares, deer, elks and Przewalski's horses to bears and even Amur tigers.

The foundation of Russia's statehood was laid in 862 by the Varangian Rurik. Under the Grand Duke Vladimir in 988, Russia was baptized in Chersonese (Crimea). The Russian principalities were conquered by Batu Khan in 1237-42. The reign of the Golden Horde continued until 1480. In the 16th century, Russia took possession of Siberia, Kazan and Astrakhan. In the era of Catherine the Great, Crimea, Georgia and Ingushetia join. In the middle of the 19th century, a huge territory in Central Asia entered Russia. In the Far East, the country extended its influence to Uighuria and founded Vladivostok.

In 1917, after the October Revolution, Russia became part of the Soviet Union. On June 22, 1941, Nazi Germany attacked the USSR. On May 9, 1945, the USSR victoriously ends the war. After the war, the first artificial Earth satellite was launched, the first manned flight into space, the first flight to the Moon, and the creation of atomic energy were carried out. The Soviet period of history ends in 1991.

There are 84 stable historical national communities living in Russia. They, in turn, are divided into more than 190 native ethnic groups, among which the most numerous category is Russians (77.7%) and Tatars (3.72%). Confessional Russians are mostly Orthodox Christians. But Muslims also live in the country, as well as adherents of Judaism, Catholicism, Buddhism and shamanism.

Currently Currently, Russia has an 11-year system of secondary education. There are more than 650 universities in the field of higher education in the country.

The traditions of the Russian ballet school of the Bolshoi Theater (R. Nureyev, M. Baryshnikov, M. Plisetskaya) are unparalleled. The galaxy of Russian composers is known all over the world: A.N. Skryabin, P.I. Tchaikovsky, S.V. Rakhmaninov, S.S. Prokofiev, N.A. Rimsky-Korsakov, M.I. Glinka, A.S. Dargomyzhsky and many others.