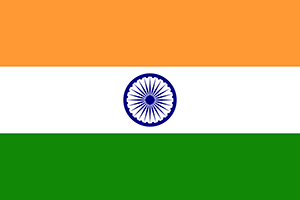 The colors of the flag of India symbolize the ideals enshrined in the Constitution of the country. The saffron color of the top stripe of the flag signifies courage, self-sacrifice, valor, and the spirit of renunciation; white - truth, peace, purity of thoughts; green - culture, abundance and faith. The state emblem in the center of the cloth is Ashoka Chakra, a Hindu symbol and the highest order of the state in peacetime. The wheel of Ashoka Chakra consists of twenty-four spokes, it recalls the eternal movement of progress and virtue. 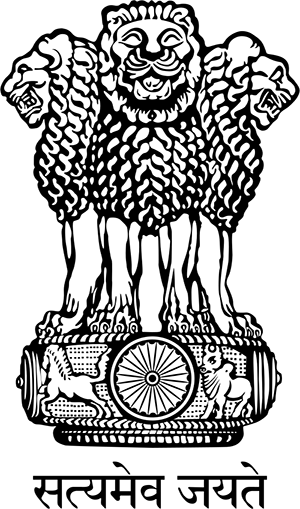 The emblem of India depicts a "lion capital" - the same lions crown an ancient column indicating where Gautama Buddha began to teach dharma - doctrine, law. The coat of arms symbolizes the nation - brave, strong, prudent and intimidating opponents. Four lions (the fourth is hidden behind three) stand on the abacus, which, like the flag, is decorated with the Ashoka Chakra. The abacus, in turn, rests on the opened lotus flower - the source of life.
Even lower is the motto: "Only Truth wins."

Applying for a visa to India

How to get to India from Russia on your own

Planes fly from Moscow and other cities of Russia to Delhi, Mumbai, Goa and Chennai - according to the established schedule.
News
ПУБЛИКАЦИИ

The state is located in South Asia. The territory of India stretches for more than 3 000 kilometers from north to south and about the same from west to east.

India gained its independent status relatively recently. Until 1947 it was one of the British colonies. After the collapse of the empire, British India was divided into two parts. Muslim territories became part of modern Pakistan, and Hindu territories formed India. Most of the country's population professes Hinduism, the inhabitants of the northern territories - Islam and Buddhism, and the eastern ones - Christianity. 6 major religions peacefully coexist in the country, as well as several faiths, to which less than 1% of the population belongs.

Paradoxically, the year of gaining independence was one of the most tragic episodes in the history of the state. As a result of interethnic and religious wars, 500 thousand civilians were killed here and more than 12 million became refugees.

Mystical India attracts tourists from all over the world.

The main airport of the country is the international airport named after Indira Gandhi - located in New Delhi. The air harbor serves up to 37 million people a year to domestic and international destinations and up to 10 million pilgrims, for whom the government has built a separate terminal.

Leaving the airport, you find yourself in a land of contrasts - here sparkling palaces adjoin frightening slum poverty. A riot of colors and scents accompanies the unsanitary conditions of city streets, where there are a lot of people.

The population density in India is very high, according to some estimates, it is 300-400 people per square kilometer! Only 25% of citizens live in cities, with a third of them living in urban slums. 40% of the country's inhabitants are illiterate, and today the Indian authorities are trying to solve this problem - every citizen of the republic must receive a basic secondary education, regardless of gender and social status.

As a rule, tourists go to big cities not only for sightseeing, but also for shopping. The most popular souvenir is an elephant figurine - a kind of visiting card of the country. In addition, Indian markets are full of exotic silks and cashmeres, saris and decorated knitwear, unprecedented spices and breathtakingly delicious fruits. Necklaces made by local craftsmen attract with their unusual shapes. A popular adornment for girls is navaratna - a pendant made of nine precious stones that symbolize nine planets.

If you can just look at bright colorful saris, then you should definitely taste the local cuisine. Indian cooking consists of traditional dishes from different regions of the country, the ingredients for which are local plants. For example, in the east, in a hot, humid climate, coconut palms grow, so coconut is used in almost all recipes. The southwest abounds in seafood - sea reptiles are eaten here and the dishes are especially spicy. The cuisine is also adjusted by the religious views prevailing in each locality.

The climatic diversity of India is dictated by its geographical location. On the territory of the country there is the rainiest place on Earth - Cherrapunji, where more than 12,000 mm of precipitation falls per year (the maximum was observed in 1860-1861 - 26 000 mm of precipitation). And in the north-west of the country, in the Thar Desert, there is not a drop of rain for about 10 months. The best time to visit India is from September to March. In all parts of the country at this time the weather is clear and comfortable with a temperature of 20-25°C.

Beach lovers will find solitude on the coast of Kerala. After Goa, it is the second most popular resort on the Indian Peninsula. The beaches here are clean, which is generally not typical for India, the nature is magnificent, the lagoons are picturesque, the climate is comfortable. Well, the smallest and very popular state of India with tourists, Goa, where the water temperature is 28-29 degrees Celsius all year round, is called heaven on earth. A wonderful beach holiday here can be combined with excursions - to the historical Portuguese forts of Aguada and Alorna, to the Savoy spice garden, to the Dudhsagar waterfall, to the churches and narrow streets of Old Goa, where St. Catherine's Cathedral stands (the largest Christian temple in geographic Asia). ).

There are many architectural monuments in the central part of the country, among which is the Taj Mahal, one of the seven wonders of the world. The mausoleum-mosque is a magnificent palace of white marble, built in the 17th century by order of the padishah Shah Jahan in memory of his wife, who died in childbirth, the fourteenth in a row. The ruler of the Mughal Empire was subsequently buried here.

Ajanta, a temple and monastery cave complex dating back to the 2nd century BC, fascinates with its silent grandeur.

In this country, a surprisingly reverent attitude of man to nature, which can be traced in all spheres of life. There are 55 parks and more than 300 nature reserves on the territory of India; in many, nature has retained its original appearance. A unique ecological system inhabited by rare birds and animals has been preserved here.

Indian medicine and science deserve special attention. It was here that they first began to carry out operations using steel tools, while other peoples used copper and bronze. The ancient treatise Sushruta has become a diamond of world medicine. Amazingly, at the beginning of the 5th century AD in India they already knew how to do plastic surgery. Doctors were engaged in the restoration of lips, nose, ears. The treatise describes the method of rhinoplasty, which, with some changes, is used to this day.

The Indians also made a significant contribution to mathematics. Thanks to India, we have a decimal system for writing numbers, symbols for numbers from 0 to 9. Without this, it is impossible to imagine the modern world.

Despite the hustle and bustle, time in India seems to have stopped. Inner peace, for which Western people go to local ashrams, is the highest value. The spiritual here is higher than the material, and civilization peacefully coexists with marvelous nature.