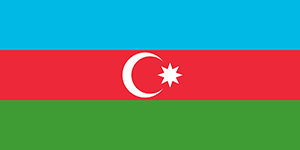 Each of the three colored stripes of the flag of Azerbaijan has its own meaning - the blue one symbolizes glory, honor, sincerity and fidelity; red - strength, love, courage and bravery; green - freedom, joy, health and hope. The crescent means adherence to Islam, and the star is Sirius, the patron saint of travelers. 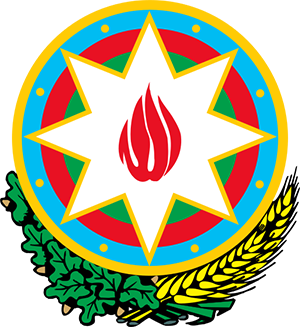 The coat of arms of Azerbaijan, like the flag, is painted in national colors - blue, green and red. The number of rays of the star on the shield is eight, exactly the same number of letters of the Arabic alphabet in the name of the country. The flames in the center of the star are a symbol of the Land of Fire, as Azerbaijan is called because of the deposits of oil and gas in its bowels.

Applying for a visa to Azerbaijan

Russians do not need a visa to travel to Azerbaijan - it is enough to present a foreign passport with an entry stamp. The maximum time of stay in the republic is 90 days from the moment of entry

How to get to Azerbaijan from Russia on your own

Daily flights and trains from Moscow and other Russian cities.
News
ПУБЛИКАЦИИ

The largest country in the Transcaucasian region is located on the southwestern coast of the Caspian Sea and borders on Russia, Iran, Georgia, Turkey and Armenia. About half of the territory of Azerbaijan is occupied by mountains, the highest of which is Bazardyuzyu (4466 meters), it is part of the Dividing Range of the Greater Caucasus and stands on the border with Russian Dagestan.

The northeast and southeast of Azerbaijan are occupied by plains and lowlands rich in oil, iron ore and non-ferrous metals. In addition

to the mainland, the state includes the Baku and Absheron hilly archipelagos with mud volcanoes.

It is very sunny in Azerbaijan throughout the year, but the air temperature depends on the altitude of the area. In summer, the average in the lowlands is +27 degrees, and in the highlands +5. The best time of the year to relax in Azerbaijan is summer, when the temperature on the coast does not fall below +30. But for excursions, autumn is better suited with its comfortable weather without the sweltering heat. The largest amount of precipitation falls on the Lankaran lowland - up to 2000 mm per year, and in the foothills of the Greater Caucasus they are no more than 300 mm.

The nature of Azerbaijan is striking in its beauty and diversity. Between the blue web of rivers forests grow and fertile valleys lie. Oak, maple and beech, characteristic of forests, coexist with flowering meadows, boxwood groves, and oleander thickets. On the territory of Azerbaijan one can meet rare species of plants - black linden, Eldar pine, Lankaran acacia.

The animal world is no less diverse - it includes 12,000 species. Swans, partridges, black grouse and pheasants live near water bodies, brown bears, deer, goitered gazelles live on the hills, lynxes and leopards are found. Many species of animals are listed in the Red Book, they are protected in unique reserves, the largest and most beautiful of which is Goygol, where the country's largest lake - Goygol is located.

The first states formed on the territory of modern Azerbaijan date back to the 1st century of our era. But the Azerbaijanis themselves did not have their own statehood until 1918. Only as a result of revolutionary events the Azerbaijan Democratic Republic was proclaimed. In 1920, it entered the USSR, calling itself the Azerbaijan SSR, and remained in its composition until 1991. After the collapse of the Soviet Union, Ayaz Mutalibov, the former party leader of the republic, became the first president of Azerbaijan.

The Azerbaijani people protect not only the beauty of their lands, but also centuries-old traditions that affect all spheres of life. One of the main features of the local population is hospitality. In this Muslim country, there are no restrictions on clothing, although many women dress quite modestly - for religious reasons. On holidays, people wear bright national costumes, decorated with intricate embroidery.

Wedding traditions of Azerbaijanis are also original. For example, during courtship, the bride's side never gives an exact answer to the groom's proposal, but is limited to hints and half-hints. If during the negotiations the bride's family offered sugar for tea, then it is worth preparing for the wedding, if not, this means refusal. According to ancient beliefs, in order for a beautiful child to be born in the family, the expectant mother needs to keep her eyes on the beautiful flowers, sky and water. mausoleums and minarets, which tourists from all over the world come to see today. Applied art is reflected in the decoration of houses with exquisite paintings and beautiful carpets. Azerbaijani music is world famous - compositions by local authors are heard at concert venues around the world. It should be noted that traditional vocal and instrumental works - mughams - are included in the UNESCO Cultural Heritage List. Theatrical art, literature and cinema are actively developing in the country.

The system of school education in Azerbaijan is the same as in Russia - 4 grades of primary school, 4 grades of secondary school and 3 more years to obtain a certificate of complete secondary education, after which can be applied to universities. Higher education is divided into 3 levels, according to the Bologna system: bachelor's, master's and doctoral studies. The Baku State University is considered the best higher educational institution.

On the basis of educational institutions, the development of the sports culture of the society is actively supported. There is a growing interest in wrestling, boxing, basketball, volleyball. The country is also cultivating interest in national sports with

a thousand-year history. Among them are wrestling gyulesh, playing with a diredeime belt, a board game of backgammon, as well as an aristocratic equestrian sports team chovgan - something like a modern horse polo.

Azerbaijani poets and prose writers - Mirza Fatali Akhundov (playwright, educator, philosopher of the 19th century), Najaf-bek Fatali-bek oglu Vezirov (theatrical figure, playwright of the 19th-20th centuries), Mammad Said Ordubadi (the founder of the historical novel genre in Soviet Azerbaijan) - presented wonderful works to the treasury of world literature. Film director and playwright Rustam Ibragimbekov created, in collaboration with Nikita Mikhalkov, the films Burnt by the Sun (Oscar and Grand Prix at the Cannes Film Festival), Urga. Territory of Love” (“Golden Lion” Venice Film Festival). In the Middle Ages, the outstanding astronomer Nasreddin Tusi, the author of multi-volume works on the study of the culture of different countries Haji Zeynalabdin Shirvani and many other scientists and educators worked on the territory of Azerbaijan.

Tourism in Azerbaijan dates back to the time of the Great Silk Road - even then travelers chose the coasts of the Caspian Sea for recreation. Now the tourism industry is well developed in the state. For guests of the country, comfortable hotels have been built and beaches equipped, they are offered educational excursions.

There are several resort areas on the territory of the country. The most famous are located in Baku and Lankaran. Here you can not only relax on the beautiful beaches, but also touch the ancient culture of the country. The ski resort Shahdag, equipped with the latest technology, was built especially for winter recreation. Fans of "green" tourism most often go to nature reserves and national parks, some of which are included in the UNESCO World Cultural Heritage List. One of the most impressive sites is located in Gobustan - over 6,000 ancient rock paintings have been found there on an area of more than 300 hectares.

You can improve your health at the resorts of Azerbaijan. Naftalan is one of the most famous medical resorts in the country. Here, procedures are carried out using naftalan, a liquid similar to oil. It helps to treat skin, nervous, gynecological and cardiovascular diseases. Dozens of health resorts are located on the coast of the Caspian Sea and among the forests. The country is rich in mineral and thermal springs, which allow treatment all year round. Thanks to natural resources, clean air and developed infrastructure, the country is often called a resort region.

As a souvenir from this beautiful country, you can bring hand-made carpets, tablecloths and bags. Azerbaijani carpets are real masterpieces with original artistic ideas and ornaments. Many travelers choose armudas as a souvenir - pear-shaped vessels for tea, they are made of glass and decorated with oriental ornaments. Ceramic products, such as dishes, are also popular.

In recent years, the large music festival ZHARA, which takes place in the summer in Baku, has been very popular. On warm evenings in the capital of Azerbaijan, you can stroll along the picturesque embankment, watching the sunset, or go on a boat trip. Children are always interested in the Baku Zoo and Sumgayit Water Park.

Tasting of the local cuisine is an obligatory item on any trip. Here it is customary to add vegetables, fruits, spices to dishes. The Azerbaijani pilaf is famous, which is cooked in several stages. It has a special aroma and amazing taste. Kutabs, dolma and many types of baklava are an obligatory dish on the table of Azerbaijanis. For cooking, housewives use tandoors (brazier ovens), cauldrons and pits (they make piti soup). With their help, the most fragrant bakery products, juicy meat dishes, delicious soups are obtained.

Many dishes of national cuisine can be tasted during the celebration of the Spring Equinox, during which it is customary to sew

new clothes, prepare delicious traditional treats and plant trees. On the eve of the holiday, Azerbaijanis go to visit each other, and green wheat sprouts are always in the houses. Novruz is held with folk dances, songs and national sports competitions - it is celebrated in March. In the villages they also like to organize harvest festivals.