The ILO continues to believe that systematic child labor is no longer used during the cotton harvest in Uzbekistan. Schoolchildren and students were not mobilized to pick cotton; however, some isolated cases of child labor did occur.

Systematic forced labor was not used during the 2020 cotton harvest. The reforms are being phased in and continue to have significant positive impacts. However, in some regions and districts there are still difficulties with their implementation at the local level. Monitoring observers were able to work freely and with confidentiality.

Nationwide, the share of forced pickers decreased by 33% in 2020. The vast majority of pickers participated in the harvest voluntarily, but about 4% experienced direct or perceived coercion. In some regions and districts, there were very few or no cases of forced labor in 2020.


A significant proportion of people subjected to forced labor have not experienced a direct threat from local officials or leaders, but rather perceived > the threat of possible negative consequences, such as the loss of rights and privileges, in case of refusal. Such situations are considered forced labor and should be addressed through human rights-based education and information.

Evidence suggests that reforms continue to have apositive impact and that the rate of reduction in the use of forced labor has even accelerated compared to last year. The remaining cases of forced labor may occur in "hard-to-reach places" or be associated with established practices that are difficult to change.

ILO monitoring observers confirmed that wages increased compared to the previous cotton harvest. As a rule, cotton pickers received their wages on time and in full. Each picker received an average of UZS1.54 million1 in wages in 2020.

60% of pickers said the 2020 cotton harvest was their only source of cash income in that year . Wages for the cotton harvest were a critical part of most cotton pickers' livelihoods.

Most cotton pickers reported that working conditions had improved compared to 2019. Only 3% said that conditions were worse than the previous year. This applies to transport, food, access to water, sanitation and other conditions.

The ban on the involvement of students, teachers, nurses and doctors systematically enforced and monitored locally.

Reports appeared on social media about isolated cases of participation of military conscripts and emergency workers in the 2020 cotton harvest campaign. These reports were officially investigated, but could not be confirmed due to lack of detailed information and evidence. The use of military conscripts does not comply with the principles of the ILO Convention on Forced or Compulsory Labor (No. 29).

Context of the use of forced labor

Picking cotton during the 2020 cotton harvest in in total, 12.9% of the population aged 18 to 50 were involved. Each picker participated in the harvest for an average of 21 days.


The vast majority of pickers participated in the harvest voluntarily, but about 4% experienced direct or perceived compulsion. Three broad categories of such cases were identified:

collectors who were directly threatened;

collectors who were not directly threatened but perceived the threat of negative consequences if they refused ;

replacement pickers who were not themselves subjected to coercion, but it can be assumed that the individuals they replaced experienced some form of coercion against themselves.

Pickers who were directly threatened fall into two categories. subcategories:

People threatened with loss or reduction of certain social benefits/benefits by mahalla representatives;

These differences between the various categories are important as they require different measures to further mitigate risks for the 2021 cotton harvest.

B As a result of the pandemic, many Uzbek labor migrants have returned to Uzbekistan, which in all likelihood contributed to an increase in the local labor force for the cotton harvest.

Some schools and educational institutions have reduced their activities during the harvest. This meant that in some cases the children went with their parents to the cotton fields. Most of these children did not participate in the cotton harvest, but there were isolated cases of involvement of children.


Many respondents expressed concern about COVID-19 in both the qualitative and quantitative stages of ILO monitoring. Statements included health concerns as well as concerns about the economic impact of lockdown measures and travel restrictions. Respondents had a high level of awareness about the coronavirus.

A minority of cotton pickers had regular and free access to face masks, hand sanitizers and/or handwash.

Independent civil society activists said they were free to monitor the 2020 cotton harvest and operate freely against the use of forced labor. There were no reports of harassment or intimidation related to forced labor or cotton picking.

Dialogue between government and civil society continued in 2020. Activists are members of the new National Commission to Combat human trafficking and forced labor. However, activists still face obstacles when trying to register their civil society organizations with the Ministry of Justice. At the same time, civil society activists were registered by the Ministry of Employment and Labor Relations and provided with official badges allowing them to monitor freely.

Government replaces quota system the market model and takes the necessary measures aimed at minimizing the risk of forced labor through fair recruitment practices and adequate remuneration. This will likely put an end to the practice of bringing in pickers at the very end of the harvest simply for the sake of achieving quantitative targets.

Government reforms can help eliminate the risks of forced labor while also creating much-needed opportunities for employment. Economic growth will enable further reforms in education, health care, infrastructure, and other areas. These reforms must be supported by the international community.

Trade and investment decisions made by responsible international investors are likely to further reverse the legacy of the planned economy. They can also have a positive impact on compliance with international labor standards. In addition, if the number of permanent decent jobs in the textile and clothing industry and in other sectors of the economy grows, there may be a reduction in seasonal peaks in labor demand, which often fuel unfair recruitment practices.

B In some provinces and districts, there were very few or no cases of forced labor in 2020. This, combined with the fact that some textile clusters have switched or are switching to mechanized harvesting, confirms the view that by sourcing from Uzbekistan, international investors or buyers will be able to manage labor risks in their supply chains.

The ILO believes that responsible sourcing of Uzbek cotton, textiles and clothing should be supported and encouraged. The ILO is ready to pilot tools and mechanisms in Uzbekistan to enable international investors, brands and retailers to take reasonable business solutions. 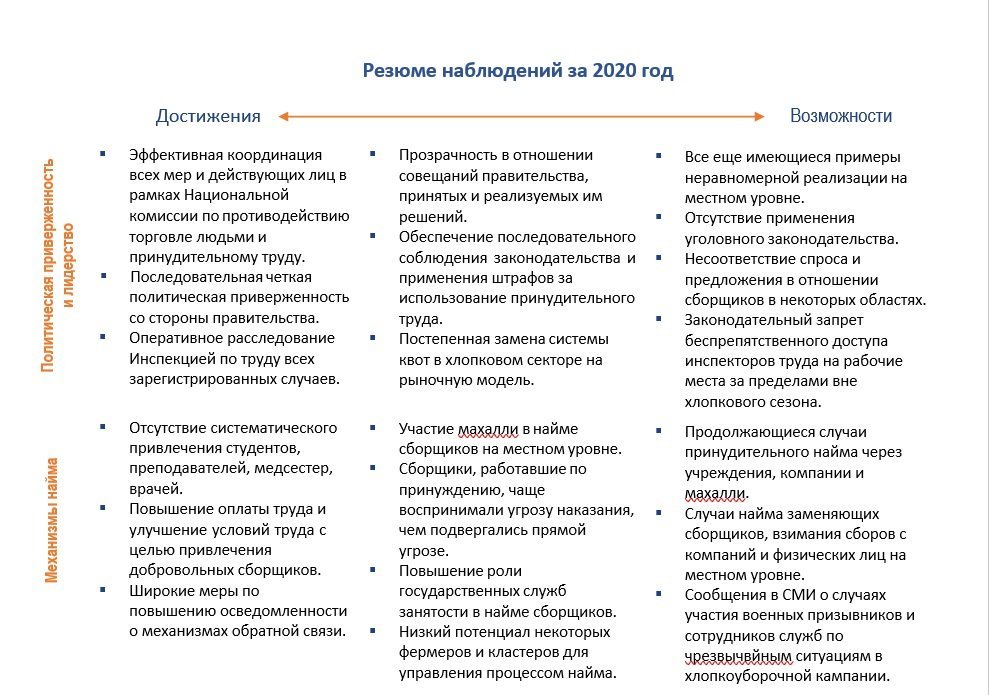 Judicial and legal reforms in Uzbekistan: 10 important steps in 2020

Java is home to the world's largest Buddhist shrine

Amazing secrets of the Urals

Phu Quoc is a resort pearl of Vietnam

Mysterious kingdom in the Himalayas

Social monitoring: how citizens of the EAEU countries live