Royal Palaces and Wat Phra Kaew in Bangkok. These are special places that always attract tourists.

Boats on the Menam river loaded with ripe bananas, golden pointed spiers of towers shining in the rays of the sun, white prayer houses along all the streets, crowds of monks in saffron-yellow cloaks, blue and green as jade, sacred statues between bright scarlet columns - such today you can see one of the oldest quarters of modern Bangkok. It really makes an impression on tourists who dissolve into the seven millionth army of the inhabitants of the Thai capital, which in Thai is called Trung Ten - "City of Angels". Around - skyscrapers of hotels, peacefully adjacent to graceful temples. The Thai capital has managed to retain its charm despite the city's "global urbanization." 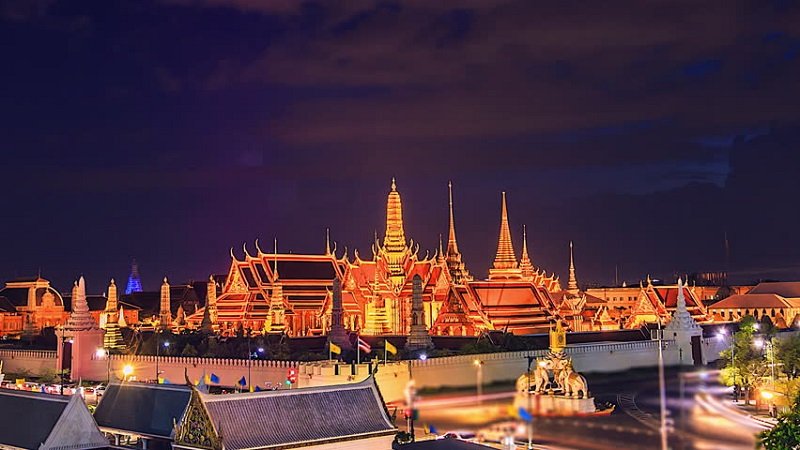 The capital on the river Menama, which today is more often called Chao Phraya, was founded by representatives of the Chakri dynasty, which came to power in ancient Siam in 1782 as a result of officer conspiracy. Until now, she retains the throne. The last kings of Thailand, making numerous foreign visits, managed to turn Bangkok into an object of pilgrimage for tourists from all over the world. This is especially true of the penultimate representative of the dynasty - the king & nbsp; Bhumibol Adulyadej, who passed away not so long ago, in 2016. This man ruled the country for more than 70 years - he is the longest-reigning monarch in Thai history, which is noted in the Guinness Book of Records. His coronation name (full title) is Prabat Somdet Phra Paramindara Maha Bhumibol Adulyadej Mahitaladhibet Ramahibodi Chakrinarubodind Sayamindaradkhtirat Boromanatbohit. The average person will probably never pronounce it correctly. However, it was under this king, who is better known as Rama IX, that everyone in Europe learned about Thailand from young to old.

Rama IX opened to art tourists visiting Bangkok a large area of the royal residence, including the part that was built at the end of the 18th century by his ancestor, Rama I. It is located on the east bank of the Maenam. Luxurious palaces, buildings of ministries and even one Buddhist monastery with temples - Chedis have grown on the quadrangular square since that time. The coronation hall of the rulers of the Chakri dynasty is located on the spiers of the oldest building, erected in 1783. The pearl-encrusted throne of Rama I is still located here, as well as the second throne and the royal bed. Glittering green and gold trim walls show images of angels emerging from open lotus flowers.


Bangkok is an object of pilgrimage for tourists from all over the world. Photo: sonia.tululuka.net< i>


Of the other four palaces of the royal residence, the most impressive, if I may say so in relation to the architectural structure, is the Grand Palace of the Chakri dynasty. It is also very interesting from an architectural point of view. The building was erected in 1876 during the reign of King Chulalongkorn and is a stylized European Renaissance castle. And the building is crowned with a typical Thai multi-tiered roof, decorated with carved celestial snakes. The palace is surrounded on all sides by temple turrets with tall thin spiers. 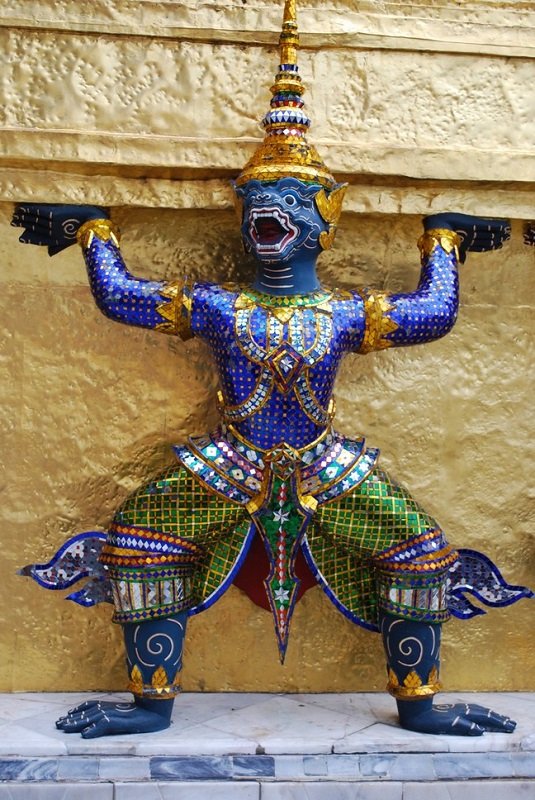 One of the formidable guards of the Chakri Dynasty. Photo: forum.awd.ru


King Rama I in 1784 declared this emerald green statue the protector god of the Chakri dynasty. A temple was built nearby - a place of common prayers. The sanctuary is decorated with statues of 112 eagles with human heads - these are symbols of the Hindu god Vishnu transferred to Buddhism.

Since the emerald Buddha cannot appear before people in the nude, court craftsmen sewed clothes woven with gold and decorated with precious stones for him. It is believed that the tourist  very lucky when he suddenly sees how the king conducts a solemn ceremony that takes place three times a year - before the rainy season, before the dry season and before the cool season - personally dressing the god who patronizes Thailand and, of course, the Chakri dynasty.
Bangkok tourism travel
|
Twitter
|
VKontakte
|
Odnoklassniki