Crocodiles managed to survive many natural disasters on our planet. Today it is one of those few animal species that has not changed much over millions of years of evolution. The modern habitat of reptiles is tropical and subtropical regions of the planet, they are common in the hot zone of Africa, America and Australia. And - of course! There are many of them in Asia.

The entire "crocodile tribe" is divided into representatives of various families. And the easiest way to tell them apart is by the head. In a crocodile, for example, the muzzle is wide, somewhat reminiscent of a rounded rectangle, at the corners of which the eyes and nostrils are located. But the alligator has a cone-shaped head and is closer to a triangle in shape. The fundamental difference between crocodiles and alligators is where even the most curious naturalist is unlikely to climb if the reptile is alive and well. It is in the mouth! The upper jaw of the alligator is somewhat wider and longer than the lower. When the mouth is closed, only the upper teeth stick out, while the mouth of a real crocodile is arranged differently: the jaws are the same in length and width, and the teeth, when the mouth is closed, are placed in special notches-grooves. In particular, the fourth tooth of the lower jaw of a crocodile will certainly stick out. True, some crocodiles show features that are absent from their relatives. Well, that's right - by the way. 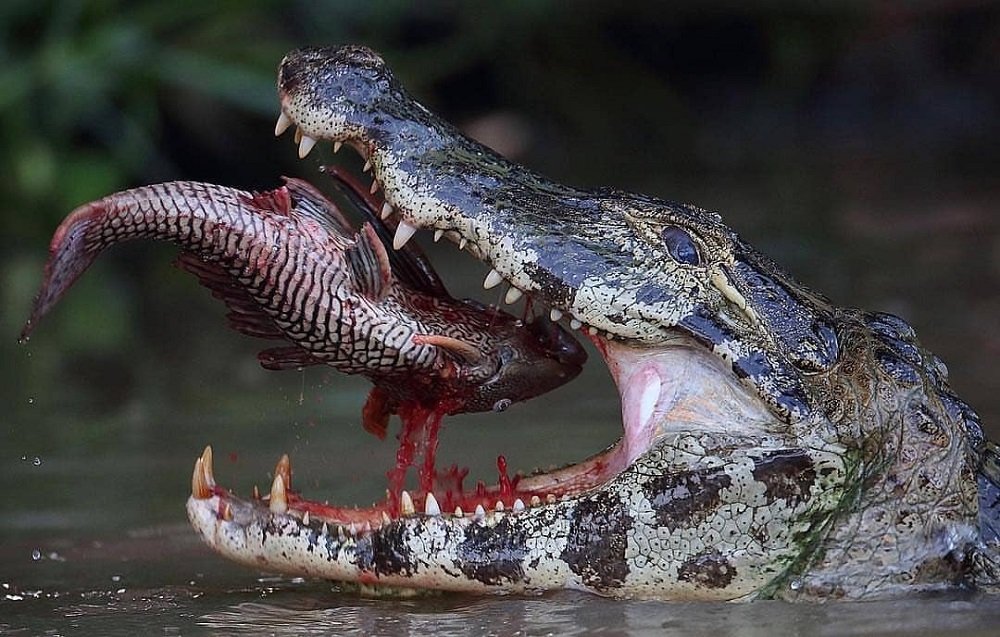 Both crocodiles and alligators  surprisingly agile both in water and on land, armed with powerful jaws, to a greater extent their purpose is not chewing, but capturing and swallowing the victim: small prey is eaten whole, and larger prey is torn into pieces and swallowed. Some subspecies prefer fresh water, others salty, and some feel comfortable in both. And without exception, all of them are carnivores.

Crocodiles have always been perceived ambiguously by humans, since people have always had a diverse range of feelings towards them - from paralyzing fear to admiration. So, in ancient Egypt, the god Sebek was depicted in the guise of a crocodile, for some time these reptiles were considered sacred animals here and were embalmed after death. In Arabia, at one time, people suspected of a crime were subjected to the “crocodile test” procedure: they were justified only if, for some reason, the reptile did not eat the poor fellow. In the Philippines and Borneo, for religious reasons, sacrifices were regularly made to crocodiles - livestock were voluntarily fed to them on certain days. Although it’s understandable: a well-fed crocodile is a more pleasant neighbor than a hungry one, because when he wants to eat, he is ready to eat any protein that swims, drifts or comes across on the way, including his own offspring. However, they do not kill in the name of social status and hatred. One Indonesian belief says that the great Dayak leaders, having completed their earthly journey, turned into wise crocodiles. 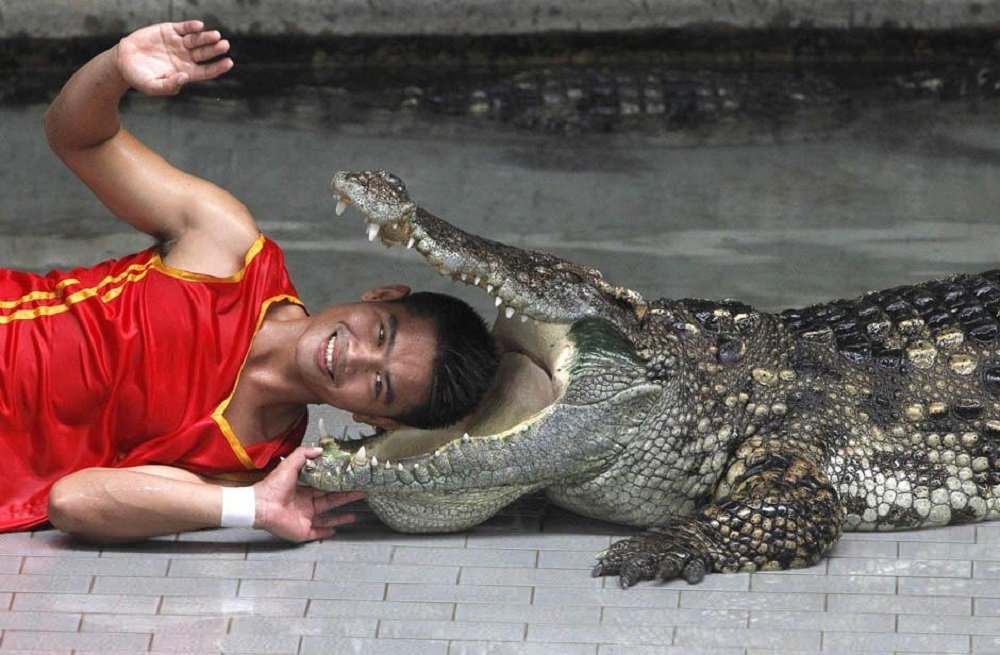 In a word, many peoples of the world have a place for a crocodile in their legendary epos. For example, such a common expression - "pouring crocodile tears" - means the pretense of an unkind person who mourns the unfortunate victim, who was also killed by him. expressed a special relationship with the crocodile. And not so long ago it turned out that these earthly creatures really cry, but not from pity for their victims, but from an excess of salt in the body. In reptiles, the kidneys work sluggishly, so they have developed salt-excreting glands near the eyes - with their help, the body is released & nbsp; from harmful excesses. When they work at full strength, it seems that the toothy predator is crying. By the way, not only crocodiles get rid of salts this way, but also some other animals - iguanas, some types of turtles, sea snakes and tube-bearing birds - frigates and albatrosses.

All crocodilians are basically similar to each other, despite differences in appearance. The nose and eyes of reptiles are located on the top of the skull, which allows them to see and breathe when most of the body is hidden under the surface of the reservoir. The bulging eyes have two eyelids, upper and lower, and special permeable membranes that serve to see underwater. A crocodile can stay afloat or dive thanks to its lungs, and it can regulate the volume of air in them. When breathing, the nostrils of crocodilians open, under water they are completely closed. On the back of the tongue is a palatal veil that prevents water from entering the trachea when the crocodile opens its mouth to swallow swimming prey. Crocodiles above the surface of the water can hear perfectly, but under water they are completely deaf, because their ears are closed with special valves.

Crocodiles love to hunt at night. At this time of day, their vertical pupils are wide open, which allows predators to see well in low light conditions. The back walls of the eyes have a special layer of rhodopsin that reflects the collected light through the pupil and doubles the ability to perceive a visual image in the dark. When the light hits the eyes at a certain angle, they become brilliant yellow, like a lion's. 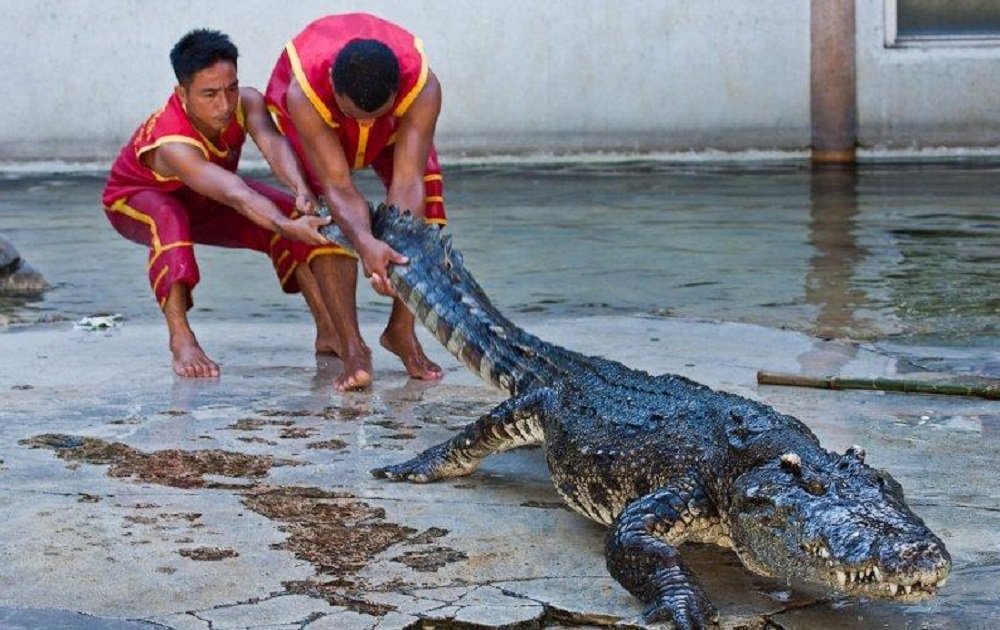 The crocodile moves in the water with the help of four legs bent parallel to the body. With the lateral movement of the tail, he helps himself to move forward and control his own body so that fish, crabs or animal detritus fall into his mouth. He is unable to turn his head to the side, as bone ribs are attached to his cervical vertebrae, due to which the rigid neck is devoid of mobility. In order to move in a strictly horizontal position, the crocodile has to turn its whole body along with its jaws.

Crocodiles lie in wait for their prey in coastal thickets or hiding in shallow water, near the banks of rivers and lakes, where wild animals come to drink. The crocodile pounces suddenly and swiftly. Usually, he, quietly sneaking up to the victim, grabs her with his teeth and seeks to quickly drown, making it impossible to resist. When the prey is dead, the crocodile tears off a part of its head with jerks and swallows it in huge pieces, but nothing larger than a dog or a hyena crawls into its narrow esophagus. Then it is taken for another part, unless, of course, some other crocodile managed to steal the dinner that was obtained with difficulty. & nbsp; Large reptile carcasses are dismembered together: stretching their paws along the body, they begin to quickly rotate around their axis and, as it were, twist individual pieces of meat out of the body. The crocodile drags the remaining flesh under the water and pushes it into some convenient crevice - to decompose. From time to time, he visits her, tearing off a piece of rotten carrion in order to swallow food on the surface - a crocodile cannot swallow large pieces underwater. almost completely exterminated a person. However, in recent years, thanks to all kinds of protective measures, the situation is gradually improving. Many reptiles have become so prolific that scientists no longer worry about their future - hunting is allowed again, as animals began to attack livestock and people. By the way, the Indo-Pacific crocodiles, which inhabited the territory from the lowest point of India to the Philippines, all of Indonesia and the surrounding islands, as well as northern Australia, are considered almost the most dangerous for humans. At the end of World War II, these reptiles ate about a thousand Japanese soldiers in Burma, who were driven by the British into the swamp between the mainland and Ramri Island. But this phenomenon is more the exception than the rule. By the way, many crocodile species are completely harmless to humans.

The largest crocodiles lived in the salty waters of river estuaries. Today they have disappeared almost everywhere. A crocodile killed in Bengal (India) more than a hundred years ago had a length of 9.9 m. In the Philippines, around the same period, a crocodile with a length of 8.7 m was shot. According to the Guinness Book of Records, the largest of modern crocodiles has a length of 5 m 87 see, he seems to live today in one of the Indian reserves. Most mature males reach 4-5 m, their weight is 200-300 kg. Elderly individuals can be one and a half times heavier. By the way, crocodiles age by 70-80 years, but some of them live more than 100 years.
One-meter-long crocodiles can stay under water for 40 minutes, and large individuals do without air for even longer - more than an hour.

Gharials, living mainly in the Asian region, also belong to the "crocodile tribe". And if so, then in basic terms they are similar to crocodiles and alligators, they have approximately the same body structure, approximately the same habits and habits. But there are some pretty significant differences as well. Yet they are representatives of different families.

Gharial (Gavialis gangeticus) is the only species in the crocodile family. Unlike, say, alligators, in which the snout is round and wide, in these special crocodiles it is long and very narrow, as, indeed, itself. the body is also long and rather thin. Therefore, it is simply impossible to confuse the gharial with someone from the crocodile squad. The habitats of these reptiles are mainly the Brahmaputra and Chambala rivers in India, as well as the Rapti Narayani in Nepal. 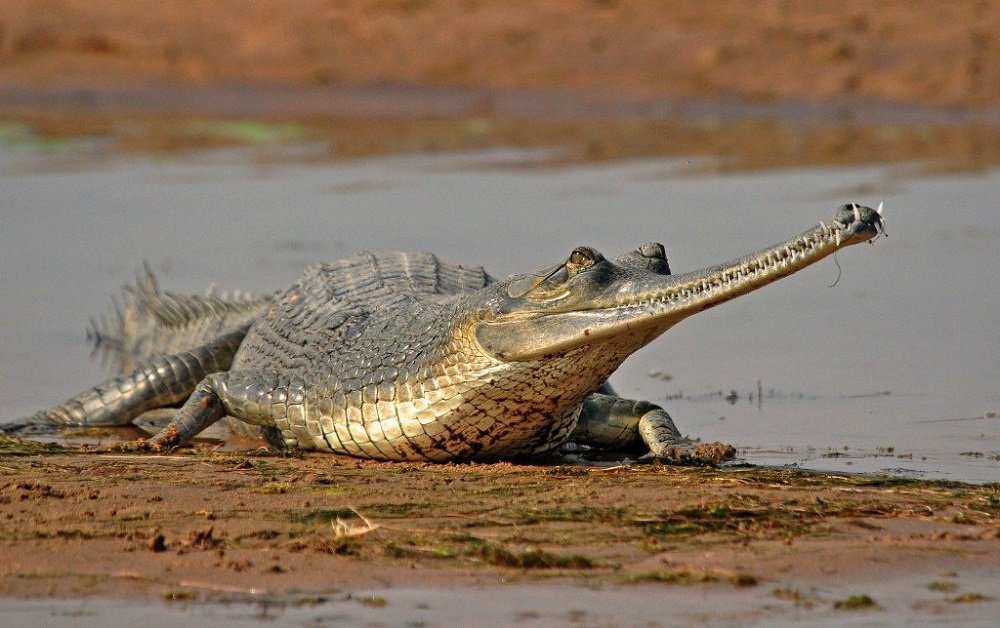 Gharials are very large crocodiles, often they grow larger than their toothy counterparts - an ordinary crocodile and an alligator. The largest gharial that fell into the hands of scientists reached a size of 7 m 20 cm. Today, this is an absolute record! Although, as already noted, some crocodiles were found even larger.

The "culinary diet" of gharials is also not so diverse - they mainly feed on fish, which they quickly catch under water, since the "graceful" shapes of the head and bodies allow predators to move dexterously in this environment. For humans, gharial is not at all dangerous. On the contrary, man has always brought a lot of trouble to these reptiles: first of all, leather was valued, from which all kinds of things were made. Asian pharmacists paid big money for various parts of the body of this animal, and restaurateurs paid for eggs, from which they prepared delicious dishes.

Unfortunately, modern science still does not know very much about how "wild" the female gavial builds her nest. There are different opinions on this matter, but most experts agree that it is dug up in the ground. How many babies are born is also unknown: if we assume that it is about the same as in captivity, then this is about 40 eggs.