Hundreds of thousands of people annually come to the Philippine capital of Manila on January 9 to take part in a grandiose religious celebration - a procession in honor of the Black Nazarene Day.

Crowds gather in the central area of the Philippine capital, Quiapo. Moreover, these are not only residents of the Philippines, but also pilgrims who have come from all over the world to touch the shrine - the miraculous statue of Christ. Places at the gates of the small basilica of the Church of St. John the Baptist, where the relic has been kept since 1787, as well as in the surrounding streets, have been occupied since the night. It is from the temple early in the morning on January 9 that a mass procession begins every year. At this time, the streets of Manila resemble a huge human anthill. Every year, from 1.5 to 3 million people take part in the procession.

At six in the morning, the front doors of the church swing wide open, several strong men in red shirts come out - they carry out an ancient statue of Jesus Christ carrying his cross. The main Philippine Christian relic is made of durable dark mahogany - camagonga. The figure of Christ is made in human growth. The archbishop leads the procession. The statue is solemnly hoisted onto a special wagon, to which long ropes are attached. Hundreds of hands of believers reach out to these ropes to take part in the procession. Sometimes there is such a crowd that the police and doctors have to intervene, but usually the situation does without serious consequences. And now the lucky ones, who managed to grab the ropes, slowly drag the wagon along the main streets of Quiapo - almost to the very presidential palace. The procession then reaches the bridge that spans the banks of the Pasig River, which splits Manila in two. 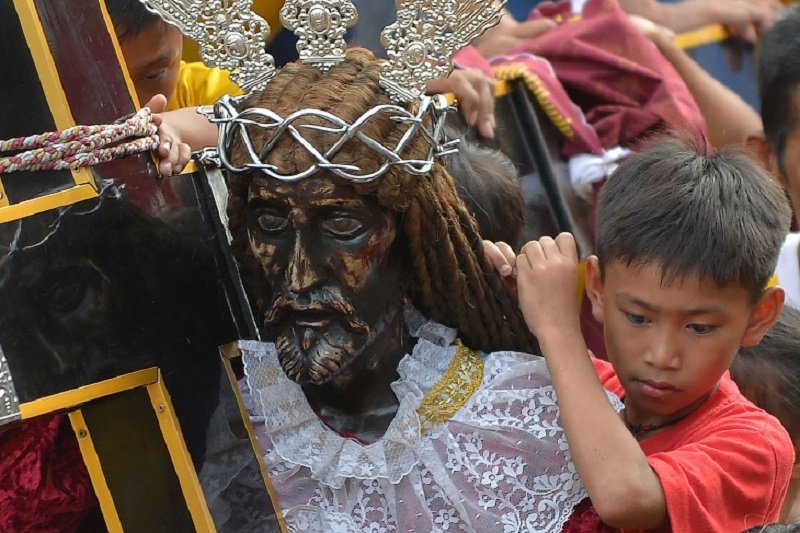 According to legend, the statue of the Black Nazarene in 1606 survived a terrible fire on the ship of the missionaries -  Augustinian monks who took her to the Philippines to bring the light of Christianity to the local population. Hence, by the way, the name - the Black Nazarene: although the statue did not burn down, the smoke smoked it pretty much. After surviving one fire, she went through two more serious fires in the basilica of the church of St. John the Baptist - and there the flames could not destroy her. The statue was not damaged during the devastating earthquakes of 1645 and 1863 in the Philippines. Local Catholics saw divine signs in this and took the statue to the shrines. In their opinion, the Black Nazarene has a powerful healing power and can prevent the coming hardships of life, while also granting health to those who suffer.  You just need to touch the statue.

People come to Manila for this. The most impatient begin to rush to the statue as soon as it crosses the threshold of the basilica. At some point, it seems that the crowd, rushing to the shrine, went crazy, and the police have to try hard to bring people to their senses. But it seems to be useless - there are more and more human hands reaching for the figure of Christ. At some point, it becomes clear that the forces of law enforcement officers are clearly not enough - then volunteers intervene in the situation. Here, at last, by joint efforts it is possible to restrain the first onslaught of the crowd. The flow of people is becoming more organized. Real living sea! Of course, everyone who wants and suffers cannot touch the relic - the statue is carefully guarded so that it does not suffer in a crush from the excessive zeal of people who dream of gaining vitality and ... a little happiness. It is believed that if you touch a statue or wagon with a handkerchief or towel, and then wipe the body with it, then in the near future misfortunes will bypass.


In the end, when some of the pilgrims begin to understand that they are not destined to touch the statue this time, they start a real battle to even touch the wagon, on which the shrine is carried. If this also fails, then there is always another way to receive divine grace in reserve - now you need to try to touch the ropes on which the cart with the Black Nazarene is being dragged. It is believed that divine light and warmth emanate from all these items while the statue is in the wagon.

Alas, most people's dream never comes true - so they will certainly come to Manila next year to try again implement it. In the meantime ... for now, they have to be content with only touching copies of the relic, which are always carried after the original. Everyone is praying and shouting “Viva Jesus of Nazareth! Viva lord of Nazareth! To some curious observers, it seems that people do indeed fall into religious ecstasy. From a bird's eye view, more precisely from the top of the tallest building in Chiapo, it seems that the mass of people   turns into a single living organism - highly aroused in close proximity to the wagon with the Black Nazarene.

No crush on public transport compares to this! Each participant in the procession understands that they will have to endure very strong physical inconveniences - many believers in this crush simply cannot stand it and lose consciousness, they are hastily trying to evacuate somewhere to the side where you can take a deep breath of fresh air.

It's just amazing, but according to the statistics, there are not so many serious injuries after the Day of the Black Nazarene. Yes, someone faints almost constantly - the unbearable stuffiness of the street does its dirty work, it is even more difficult to breathe in the crowd - especially when people tightly press their bodies against each other for more than ten hours in a row. Many walk barefoot on the red-hot pavement - this is how Christ went to Calvary, this is how they follow, expressing repentance in a similar way.


The number of believers arriving in Manila for the Day of the Black Nazarene increases every time after some powerful natural disaster - they are not uncommon in the Philippines. One can, for example, recall Typhoon Haiyan, which brought terrible destruction to the country. Then about 10 thousand people died. Manila officials and police say about 12 million people took part in the parade the following year. Probably, this is still an exaggeration, but one thing is certain: there are incomparably more people who want to walk with a relic through the streets of the city. It is in the era of adversity that many people have a keen desire to believe in a better life.

People participating in the procession gaze intently at the face of Jesus: for some it may seem bright, which means that the year will pass safely, for others - dark, therefore, expect trouble ... & nbsp; Moreover, each of the pilgrims sees completely different faces of Christ. So they say...
Photo: kykyryzo.ru

Huaxi is a village of Chinese millionaires

Sumo: Battle of the Japanese Titans

Ati-atihan - a celebration of wild delight of the Filipinos

The main battle for the Turkish Stream is still ahead

Theyyam is an Indian dance of people and gods. VIDEO.

Crocodiles are all predators, but not all are dangerous to humans