Chingiz Aitmatov's contribution not only to Kyrgyz, but also to world literature is invaluable. This name became symbolic for its era and, undoubtedly, entered the history of world literature. “And the day lasts longer than a century ...”, “My poplar in a red scarf”, “Early cranes” ... - this is not a complete list of the master's masterpieces, imbued with the lyrics of love, friendship, devotion ... Many of the works of Chingiz Aitmatov were filmed by the film studio " Kyrgyzfilm. Some films based on his work were shown at international festivals in Berlin and Venice.

Chingiz Aitmatov is a laureate of numerous state awards and prizes, he was awarded the titles of People's Writer of the Kirghiz SSR and People's Writer of Kazakhstan. The author was bilingual, that is, he wrote in Russian and Kyrgyz. In most cases, he independently translated his works into Russian in order to reflect the features of his literary style as accurately as possible. This man became a significant figure in the Kyrgyz literature of the Soviet and post-Soviet periods. His work is unique and varied. There is a place for fairy tales and legends in it, his novels tell about the global problems of our time, and these are also touching stories about love. Each line can be parsed into quotes that will never be forgotten.

The heroes of Aitmatov's works enchant with their inner beauty. They are sensitive and childishly naive, and their hearts are capable of true love. The boy Nurgazy from the story "The White Steamboat" dreamed of turning into a fish and sailing away to his father, whom he had never seen, and Jamila left her husband and native village for the sake of her lover ... People of a difficult fate fill Aitmatov's works with deep drama.

Not every writer takes the fate and experiences of people close to him so close to his heart - compatriots, brothers and sisters. Aitmatov, on the other hand, drew inspiration precisely from the environment in which he lived and communicated. He wrote about the people and for the people, which is why Aitmatov's work is close and understandable to many. The lines of his books can touch the heart of any person - from a lonely romantic to an elderly person who has lived a long life. In the writer's work, each reader finds something useful for himself, he can laugh and cry, but he will never leave the book in the middle of reading.

Historians traditionally divide the creative path of a great writer into two periods: the first is works created by him within the framework of Soviet socialist realism; the second is late prose, mostly written abroad.

Aitmatov's early prose is lyrical, full of romance, feelings and dreams. It was during this period of his work that the author creates the most significant works that are loved by readers of all ages. They do not contain the pathos of global problems, deep reflections on the world order and the frailty of being.

The heroes of early Aitmatov, inspired by life, want to love, take from life everything that can be taken, they are romantic dreamers. Many of them are childishly naive - it is in this inner purity of the heroes that the literary phenomenon of Aitmatov lies, who managed to create a fundamentally new type of hero of his time and his people. “And no matter what awaits us in the world, the truth will remain forever, while people are born and die ...” - this quote from the novel “The White Steamboat” can be considered the motto of the writer, the focus of his life values. Searching for the truth and telling it to people was the main goal of Aitmatov, through whom many of his heroes spoke.

Creativity matures with the writer. This axiom characterizes Aitmatov's literary heritage in the best possible way. The last work published in the USSR was his novel The Scaffold (1986).

After the collapse of the USSR, Chingiz Aitmatov left his native country for a long time, becoming Kyrgyzstan's ambassador to the Benelux countries - Belgium, Luxembourg and the Netherlands. Here opens a new page in his creative biography. Aitmatov rethinks his life path and creates his most controversial work, which goes beyond his traditional style. The novel "The Brand of Cassandra" stands apart among all his works. Many will not see in him the former Aitmatov, who was close and understandable to everyone. This is a confession novel, a revelation novel, in which there are notes of dystopia. Perhaps the separation from his native land helped the writer to create something fundamentally new, to rethink his approach to literature and life in general. However, while reading the novel Casasandra's Brand, dedicated to the problem of creating an artificial person, one involuntarily begins to yearn for the former Aitmatov with his touching stories about love, where there is a place for legends and myths. Abroad, the writer creates several more works of a small genre, they were published in German. In them, Aitmatov appears as a completely different writer, his creative world is reborn.

In 2006, together with a like-minded person Farhod Ustadzhalilov (Aitmatov's assistant for humanitarian work in the Russian Federation), the writer founded his own charitable foundation "Dialogue Without Borders". Within its framework, the World Without Borders project was developed, as well as a program for the development and support of the Russian language in the countries of the former USSR.

Chingiz Aitmatov died on June 10, 2008 in a hospital in the German city of Nuremberg, where he was being treated. In recent years, he has been very ill. The writer was buried in the Ata-Beyit historical-memorial complex. This place is still very popular among residents of the republic and tourists. Here is a monument symbolizing the historical path of the Kyrgyz people. The necropolis became the last refuge and burial place for many figures of the Kyrgyz intelligentsia who became victims of repression. The ashes of Chingiz Aitmatov's father, Torekul, rest in a mass grave on a hillside. 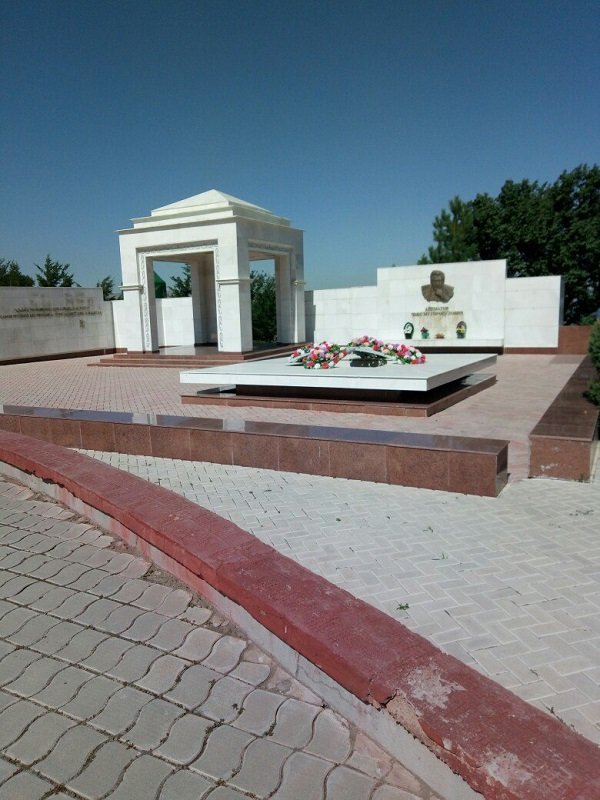 The burial place of Chingiz Aitmatov in the Ata-Beyit memorial complex.

There are always many flowers at the writer's burial place. People often come here to honor the memory of the idol of millions of readers. Some of them just sit in silence and think thoughtfully about something.

The Monument depicting the history of the development of the Kyrgyz people deserves special attention. It was installed relatively recently, in 2016. In a metaphorical and allegorical form, this monument reflects the key events in the history of Kyrgyzstan. Horseshoes hung on ropes symbolize the nomadic way of life - they are a kind of symbol of nomads. In general, the whole sculptural group looks like mythical steps that you can climb to the sky. 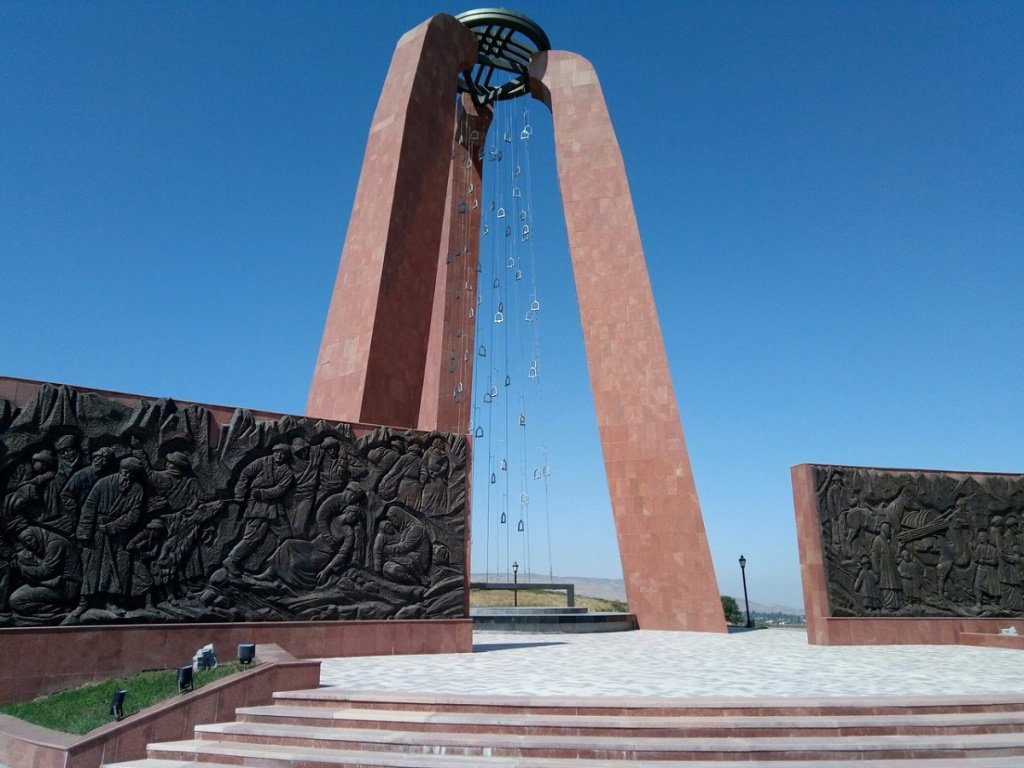 The monument symbolizes the history of the development of the Kyrgyz people. Memorial complex "Ata-Beyit".

When examining the monument, you can hear the Kyrgyz national music, it sounds constantly, creating a special atmosphere of calm.

The Ata-Beyit memorial complex is located near Bishkek, the capital of the Kyrgyz Republic. A picturesque view of the nearby villages and gently sloping hills opens up from here.

At the very end of the life of the great writer, the question of awarding him the Nobel Prize in Literature was raised. The initiative came from the scientific community of Turkey, in which Aitmatov is considered the largest Turkic-speaking writer of our time. Unfortunately, the issue of granting this high award has not been resolved.

The works of Chingiz Aitmatov are included in the school literature curriculum not only in schools in Kyrgyzstan, they are actively studied in Russian educational institutions. The younger generation especially loves the stories The White Steamboat and The Early Cranes. These works show the difficult path of a person growing up, his dreams and deeds - sometimes heroic and desperate.

Chingiz Aitmatov is a recognized genius who managed to take his work beyond the limits of national literature, to make it a world heritage. His work does not lose its relevance even today, helping people to see themselves on the pages of books, look at the world through the eyes of a hero and pronounce the wonderful word "love" in their own voice.

Malay cuisine: why do you eat with your hands?

Eskimos of Chukotka: the smallest people in Russia

Indonesia: the serene charm of Sumbawa