In the Turkish city of Edirne, hundreds of pahlivan wrestlers gather every year. They demonstrate their skills in an unusual form of wrestling called kyrkpinar. Before fights, the bodies of strong men are poured with oil. You won't see anything like it anywhere else.

Teenagers, youths and adult men are drenched head to toe in fresh olive oil to make their bodies so slippery that opponents can barely grab hold of them during a fight. This is the Turkish version of the ancient power gymnastic tradition, which captures someone no less, and sometimes even more than, for example, Japanese sumo wrestling or Thai boxing. The techniques that wrestlers use during fights are known to many fans of martial arts - they are used in Turkish wrestling gyuresh, very similar to freestyle wrestling.

According to an old legend, back in 1340, forty champions from all over the Ottoman Empire were invited measure strength during the holiday, which was arranged by the great sultan. To make the fights seem more spectacular and difficult, they were offered to douse their bodies with oil. And so they did. The rivals took fighting stances and began to compete with each other.

They revealed the strongest for a long time - all day and all night. At the dawn of the next day, only two of the strongest wrestlers stood confidently on their feet. These were the brothers Ali and Selim, whose strengths turned out to be approximately equal - they defeated all their rivals. The Sultan, given the close relationship of the wrestlers, allowed them not to fight each other. They say that at the moment when the rest of the exhausted bodies were carried away from the place of the competition, forty springs gushed out of the ground. The dusty plain turned into a lush green meadow, which is still called "Kirkpinar", which means "Forty Springs". 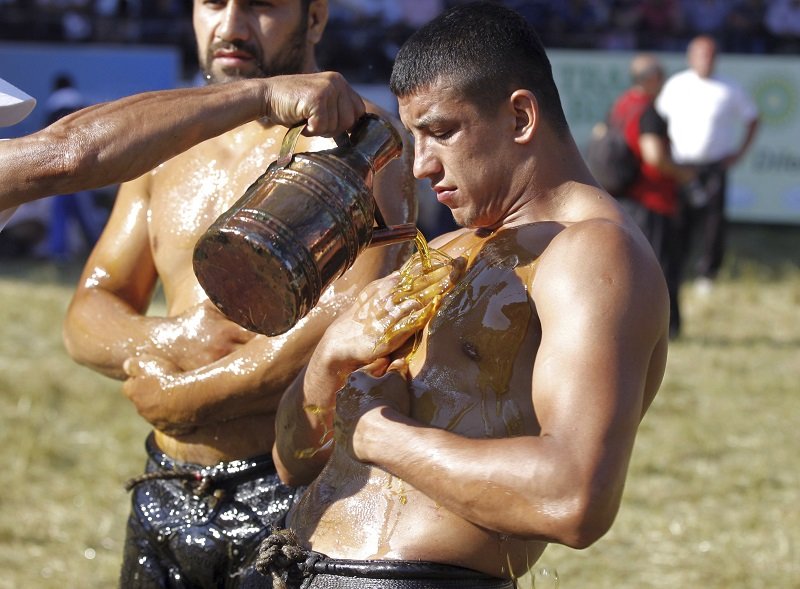 According to another version, this event happened not in 1340, but in 1346, when Sultan Orhan Gazi sent his army to fight in Rumelia (the Balkans were once called so). Sultan's brother Suleiman Pasha led a small combat detachment on that campaign, numbering 40 people. One day, his warriors stopped to rest in the town of Samone, where they decided to have a little fun, at the same time finding out which of them was stronger. The competition went on all night. This legend says that by morning only two wrestlers were on their feet - the already mentioned brothers Ali and Selim. Then the only winner allegedly also was not revealed. However, the ending of the story is somewhat different.

The fact is that both brothers turned out to be rather vain and proud people, in the end they nevertheless decided to find out which of them is stronger, and again came together in a fight. They fought all daylight hours, but could not complete the duel before sunset. Then, by the light of torches, the heroes continued their exhausting confrontation. By morning, both were so physically exhausted and exhausted that they could not even stand on their feet - they collapsed to the ground at the same time lifeless. Friends buried them under a fig tree, but after some time they decided to visit the grave, where they suddenly discovered a gushing spring (in Turkish - "pynar"). This place was named in honor of the fallen soldiers - Kirkpinar.

The hands of the athletes slide off, it is very difficult to catch on the opponent's body. Photo: Osman Orsal/Reuters

Currently, the holiday in Edirne, as a rule, begins with a prayer in the Selemia Mosque, which was once erected by the famous architect Sinan. On the square in front of the majestic building, a folklore festival is held, in which artists from all over Turkey and from neighboring countries take part. In the afternoon, by the time the competition opens, there is no free place in the stands, the fans sit even in the aisles. Finally, clapping their hands on their knees, the wrestlers appear, they walk through the oil-soaked grass. They are followed by musicians in blue trousers and colorful caps - with pipes, drums and violins.

The only clothes of the wrestlers are short leather pants, inside of which oil is poured before the fight. The hands of the athletes slip off, there is nothing to grab onto, the wrestlers rest their foreheads and try to lay their opponents on the ground with the help of a deceptive technique. A referee is assigned to each pair of pahlivans, as these wrestlers are called - he monitors that the rules of the duel are observed, punishes for forbidden tricks, and also announces the winner when one of the fighters is put on both shoulder blades or he himself fell to the ground from exhaustion.
< br> Real heroes go to the finals, usually they are people of high stature and powerful physique. They slowly begin their fuss and, as it were, "probe" the opponent's strength - such a confrontation lasts for about forty minutes. However, suddenly one of the wrestlers makes a violent move and decisively throws the other to the ground. Spectators in delight jump up from their seats, whistle, hug, wave flags. The winner-beshpekhlivan, girded with a golden belt, walks in a circle, holding a prize in his hands - a curly sheep with a red bow, a bell and beads around his neck. Yes, such a spectacle can only be seen in Thrace!

Not every wrestler manages to "save face" in a duel. Photo: Murad Sezer/Reuters


The word “pehlivan” in Persian means “brave”, “strong man”. People of large physique in Turkey are also called by this name, although in the Ottoman Empire, those warriors who demonstrated their skills in mortal combat were still considered pahlivans. The current competitors in Edirne can also be considered true pahlivans.

The Shors are one of the smallest ethnic groups in Russia.

In May - to Vietnam