Ferocious demons guard the treasures of Baodingshan —  cultural and historical objects that have been hidden from prying eyes for many centuries.

Baodingshan is the general name of the ancient Dazu complex, rock reliefs of the 7th-10th centuries. It is located next to Mount Baodingshan, about 120-125 kilometers from Chongqing (a city of central subordination in central China). The complex itself - thousands of Buddhist, Confucian, Taoist monuments. More than 100 thousand hieroglyphs are engraved on them - inscriptions and epigraphs. The most famous sculpture - "Nirvana Shakyamuni" - depicts the Buddha sleeping on his side. Its length is 31 meters. The main complex is the construction of the Shengshou Buddhist monastery. It includes, in fact, the task of the monastery itself, as well as two rock sculptural complexes - Xiafovan and Dafovan, as well as several other relatively small architectural objects. 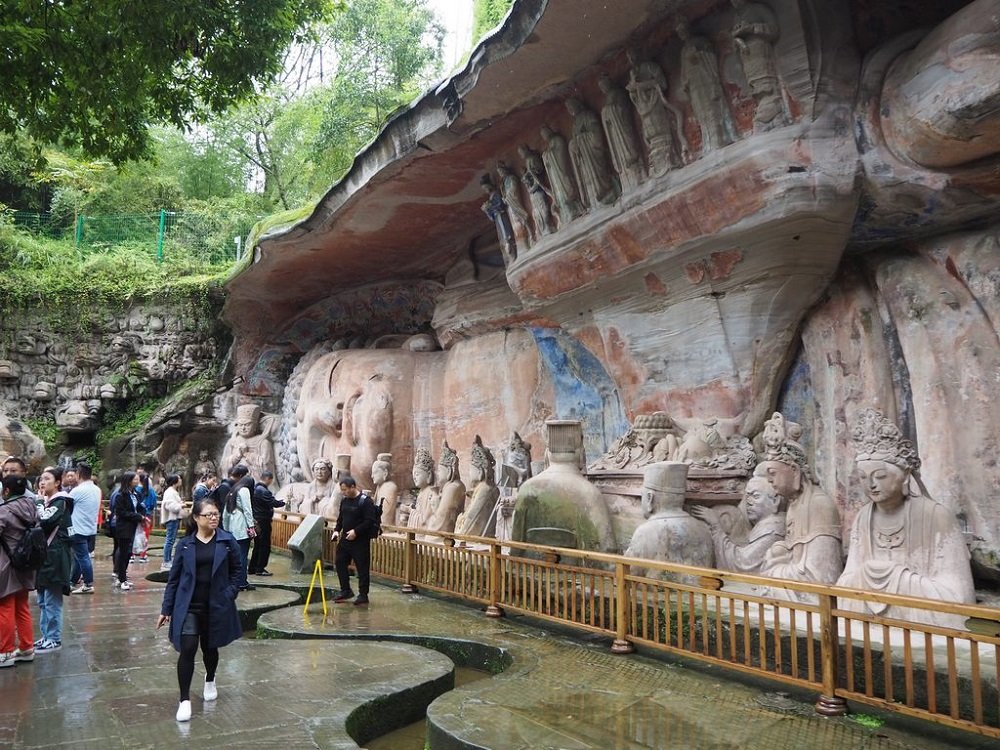 Surprisingly, as the Chinese themselves say, the first foreigner came to Baodingshan only in 1980, although the ancient complex was discovered back in 1945 by a group of Chinese adventurers. It simply does not fit into one's head why these cultural treasures remained inaccessible to many people for so long? "Baodingshan") only in the second half of the last century...

In the 6th century, Buddhism was established in China, which eventually became the state religion. True, this period did not last very long, because the asceticism of the “middle way” was too contrary to the laws of the great Chinese teacher Confucius (many modern Chinese still reverently worship him), who called people to an active life for the benefit of the whole society. Therefore, Buddhism gradually began to leave the political arena of the Celestial Empire, and Chinese Buddhists preferred to lead a secluded life - mainly within the framework of their monasteries remote from large crowds of people. They refused to obey the authorities - an unforgivable crime at all times. The consequences were not long in coming - Buddhists were persecuted every now and then, they were declared enemies, and imperial officials easily ruined monasteries. In general, an ordinary story.

What is unusual about it is that the sculptures of Baodingshan became a man-made miracle of Buddhist monks who were forced to flee from the persecution of the authorities in one of the most remote and inaccessible  provinces of China - Sichuan. Getting there was not so easy - in this region there are many high and difficult mountains, turbulent rivers and narrow gorges, which not every daredevil dared to overcome in those days. There were no roads familiar to us today - that's why Sichuan has long been considered a place forgotten by God, where you could get only along the Yangtze River: barge haulers dragged the ship upstream. Getting out of those dead, as it seemed to many, places seemed to be a difficult task at all. Many of the haulers perished in the muddy waters of the Yangtze, falling off the sheer cliffs. But the Buddhist monks, it seems, were not a fool - they managed to get to the "Mountain of Treasures" and settle there. To get to these places, many considered it impossible. Isn't that why Mount Baodingshan is so overgrown with myths and legends that some Chinese began to think that it does not exist at all? 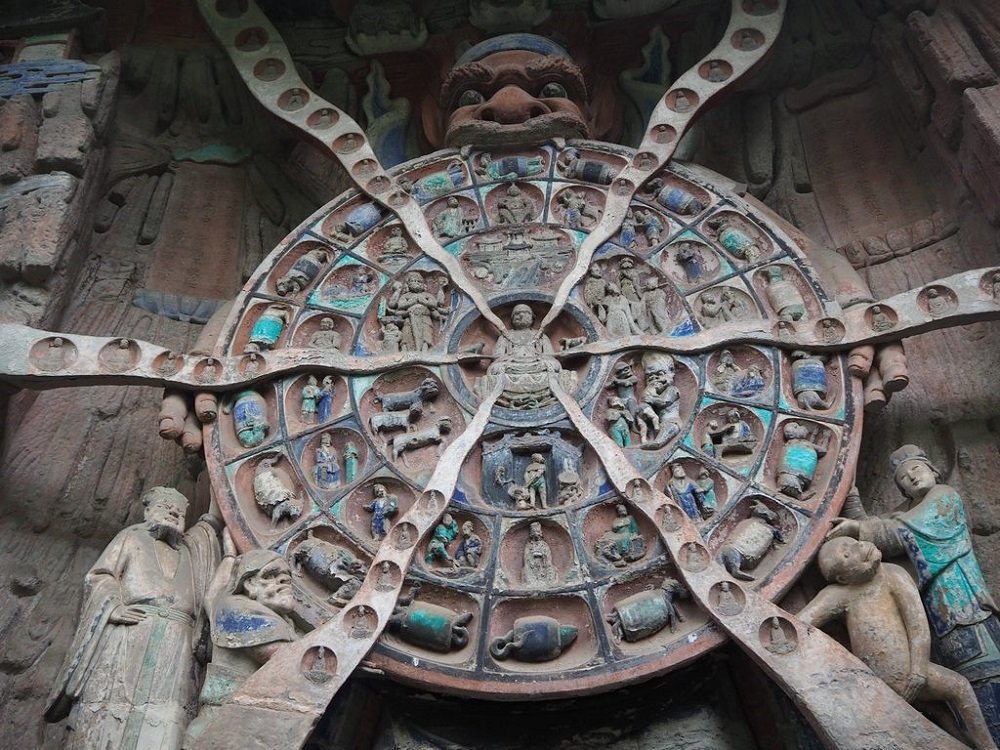 ...The most difficult year for China was 1945. The country is ravaged by war. On the one hand, the Kuomintang of Chiang Kai-shek, on the other - patrols of the People's Liberation Army of Mao Zedong. Hunghuzi robbers are rampaging on the roads. But it was during this turbulent time that three Chinese adventurers, seduced by the legendary riches of Baodingshan, decided to go on an expedition. Why did they come up with this, in general, crazy idea? Today you don't even know. Why did they risk their lives? Perhaps for the sake of science (according to one version, they were still archaeologists, according to another, they were tourists-travelers). Evil tongues say that these people simply wanted to enrich themselves at the expense of "ownerless" Buddhist treasures, about which folk rumor made legends. How to know, how to know…

Whatever it was, but the daredevils brought to life their, as it seemed then, difficult idea - they traveled the most difficult path and achieved their intended goal. Already behind was a barely passable fir forest. Suddenly, people came to a high cliff. Having worked over the restoration of a shaky and long-abandoned bridge, they finally overcame a rapids river, whose muddy waters in places crashed against the rocks, disappearing without a trace in coastal caves, and ... found themselves in front of a palisade of bamboo trunks.

Cutting your way with huge cleavers and climbing the slippery limestone rock ledges, the adventurers suddenly found themselves in the realm of silent stone statues, whose appearance sometimes caused overwhelming fear. This was the well-known complex of cave temples built today by ancient Chinese Buddhists.

However, the stormy rejoicing did not last long. After rummaging through all the corners of the caves and digging up the elastic clay at the foot of countless statues, it turned out that it was not possible to find the coveted treasures. More precisely, these treasures were everywhere, but the problem was that they could only be felt with hands, but not carried away ...

Today, tourists from all over the world come to Sichuan: some - on comfortable boats along the river, others flying in from Beijing. And to Mount Baodingshan laid quite a decent road. People come to this place to see the sacred stone Buddhist statues, which symbolize the four "noble truths": life is suffering, it is hidden in human desires, but in order to stop this suffering, you need to suppress your self-interest in every possible way, reaching nirvana (the highest goals) through meditation. To put it simply, this is precisely the “philosophical sound” of Buddhism, which invites people to follow the “middle path”, plunging into self-knowledge. Worldly concerns - all this is vanity of vanities, the main thing is the inner perfection of a person who does not shift his responsibility or blame to someone else. 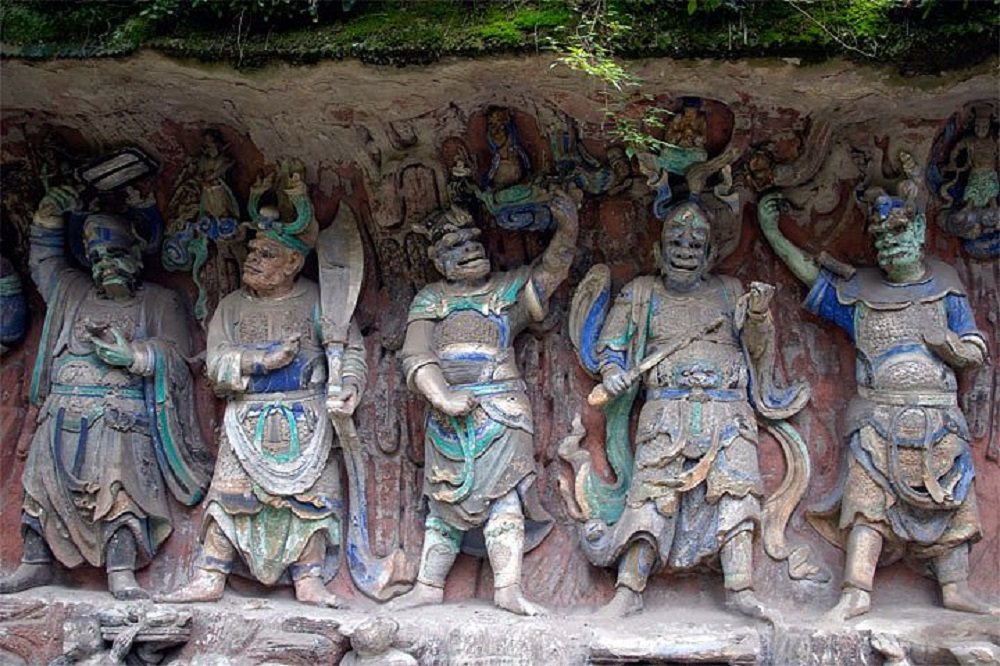 Today, the main complex of Shengshou Monastery has not been preserved in its original form: it was burned twice - the first time in XIII century, the second - in the XVII century. But every time the monks restored it - the last time during the Qing Dynasty, which ruled from 1644 to 1912.

Next to the monastery is a small sanctuary of Xiafowan, built on a stone terrace. Its walls and rooms are built of stone blocks. Sculptures are carved right into them. The most famous are located in the three-tiered "Dharmakaya Sutra Pagoda", whose height is 7.9 meters.

At one time, Shengshou became the center of tantric Buddhism in the region, and Xiafovan - the "internal" structure of the monastery, where the religious practices of the initiates took place. .

The famous complex of rock sculpture Dafowan - the symbol of Dazu (as the whole complex of ancient rock reliefs is called) - is located nearby. Once it was a place where pilgrims and wandering pilgrims aspired to go. Modern researchers have come to the conclusion that among the Buddhist rock and cave complexes of China, Dafowan is a truly unique structure, built consistently for more than a century (from 1174 to 1252) with donations from imperial persons, Chinese nobility and ordinary people.


< /sub>
In one of the grottoes of Baodingshan, there is a statue of the Peacock King sitting on a huge bird-like monster. Hundreds of Buddhas are carved right into the walls of the cave. Peacock for many nations is a symbol of abundance, fertility and immortality, so its images are often found not only in China, but also in many other countries. For example, in India.

In another cave there is a statue of the Savior covered with gilding. According to legend, she could transform into various animals and helped people solve their problems. Of course, she has seven thousand and seven hands, so many people could support her.

Fierce stone guards guard the "Mountain of Treasures", some of them hold in their hands the heads of defeated enemies who violated Buddhist laws. According to Buddhist teachings, a person who has fallen into hell can be subjected to eighteen types of torture - for each sin there is a punishment. The worst thing is drunkenness. For drunkards, especially those who incline others to addiction, demons crush their knees.

Some statues demonstrate by their appearance what kind of life awaits sinners after death. Here, a certain creature with the head of a rhinoceros hippopotamus pulls a man by the hair to a boiling cauldron. And here, someone is grinding bones with a huge wheel. And here, a couple of heads are sticking out of the sewage bath, but the ferocious guard is adamant, he persistently forces the wicked to plunge deeper and deeper into this vile-smelling slop. 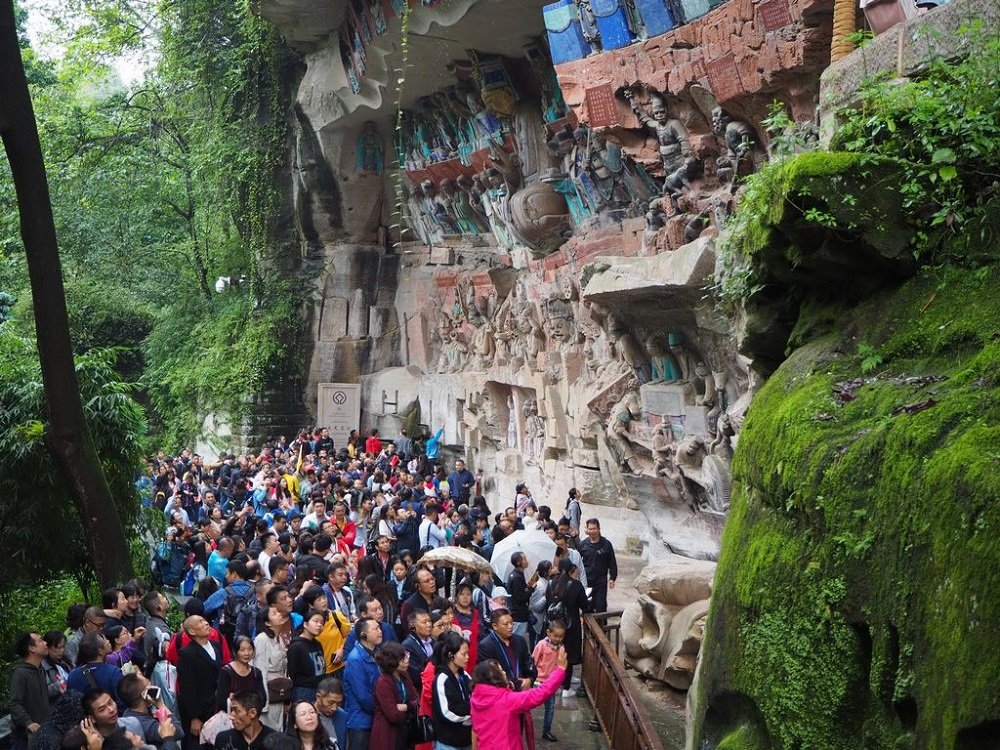 All this is somewhat reminiscent of the paintings of Hieronymus Bosch, where demons, half-humans, half-beasts, torture sinners, but in even more sophisticated ways. Surprisingly, Bosch's hellish torments are very similar to those of Baodingshan, although the brilliant Dutch painter died before the Europeans discovered China, which they did not understand.

However, not all the figures of Baodingshan are awe-inspiring. Also, many “cheerful” statues are found here, if, of course, one can put it that way - people are still having fun and indulging in flat pleasures, because they still don’t know what awaits them after death, if it turns out that they led an unrighteous life. Here, the poor man dances carelessly, enjoying a free minute, a girl tenderly plays the flute, a woman joyfully feeds peacocks, and some peasant skillfully rows a boat with oars ...

You can wander along Baodingshan, from grotto to grotto infinitely long, considering the creations of the ancient masters. But the guides do not allow this to be done - they constantly rush their wards, because the queue of those wishing to enter the complex is growing and growing. Today, the stone treasures of Baodinshan have become the same tourist attraction as the Great Wall, the Forbidden City in Beijing, and the terracotta army of Qin Shi Huang. And the formidable guards of the ancient cave temples no longer frighten anyone ...
Baodingshan history culture architecture monuments
|
Twitter
|
VKontakte
|
Odnoklassniki