For several decades, Bali has been considered one of the most fashionable and popular resorts in the world, where all the major hotel systems are represented. But what attracts travelers the most is the opportunities for both passive and active pastime.

This part of Indonesia has a favorable climate for recreation, magnificent landscapes, many beautiful volcanic lakes, healing mineral springs and stunning picturesque villages. Virtually no crime and dangerous animals, which are teeming with some other areas of the country.

Almost every inhabitant of Bali is an artist or a dancer, or an artist. In this corner of Indonesia, much is being done not for the needs of rich visiting tourists, the Balinese are trying for themselves, to realize their own creative impulses of the soul, so to speak. Sculptures are found everywhere in local souvenir shops, which are sometimes difficult to budge. And who, pray tell, will drag them with him to the plane? Nobody! So the Balinese masters prepare the statues of the heroes of the Mahabharata for internal use, and they are placed even in very poor houses. 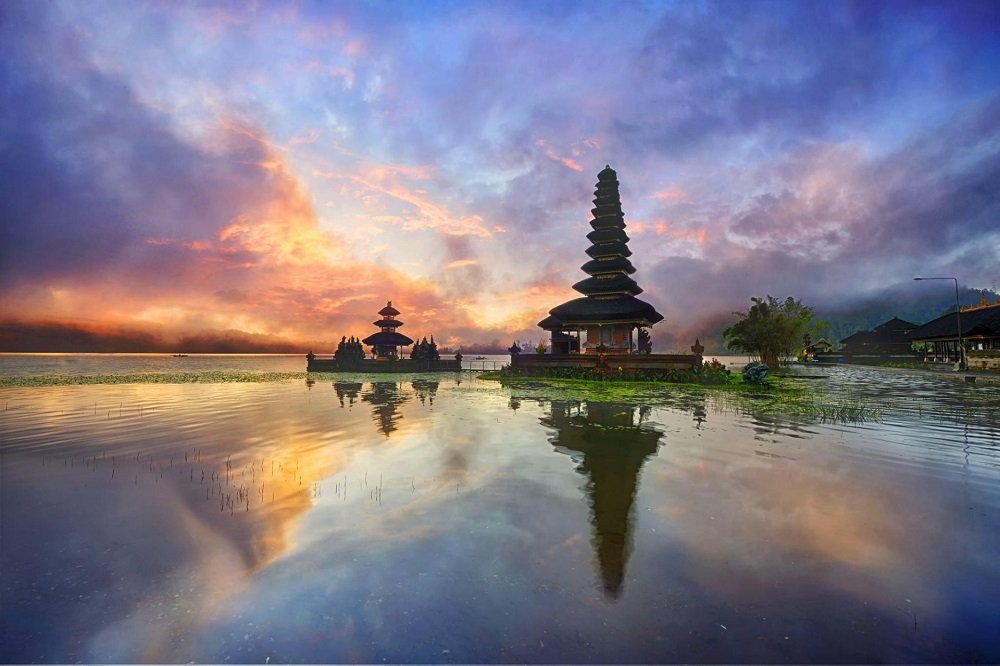 By the way, Bali is the only center of Hinduism that has survived in vast Muslim Indonesia. Hinduism is special here - there is an admixture of Buddhism in it, and the influence of ancient animalistic beliefs. There are so many temples in Bali that it is not possible to count, they say, more than 20 thousand. And the year here does not last 365 days, but only 210. It is not very clear how they live with such a calendar, in which there are not even permanent holidays. By the way, in each village all the solemn dates of the annual cycle are painted by a brahmin.

One of the most advertised places in Bali is San-ge Monkey Forest. When you come here, you find yourself in the real kingdom of tailed primates. There are so many restless beasts that all you have to do is keep your property tight, otherwise the impudent monkeys will simply confiscate it. close - you have to drive almost half a strip, moving from one mountain peak to another and periodically sliding down into depressions overgrown with lush tropical forest. Almost around every corner you see bizarre cascades of rice fields. The island of Bali is mountainous, there are practically no flat plains on it, which forces local rice growers to sow crops even on tiny terraces that descend in ledges along steep slopes. But each field is flat and sometimes resembles a huge billiard table, protected by an earthen rim. Without water, rice, as you know, does not grow, so precious moisture must be preserved. Its surplus flows down the drainpipes to the neighboring field located below - and so on along the entire slope. 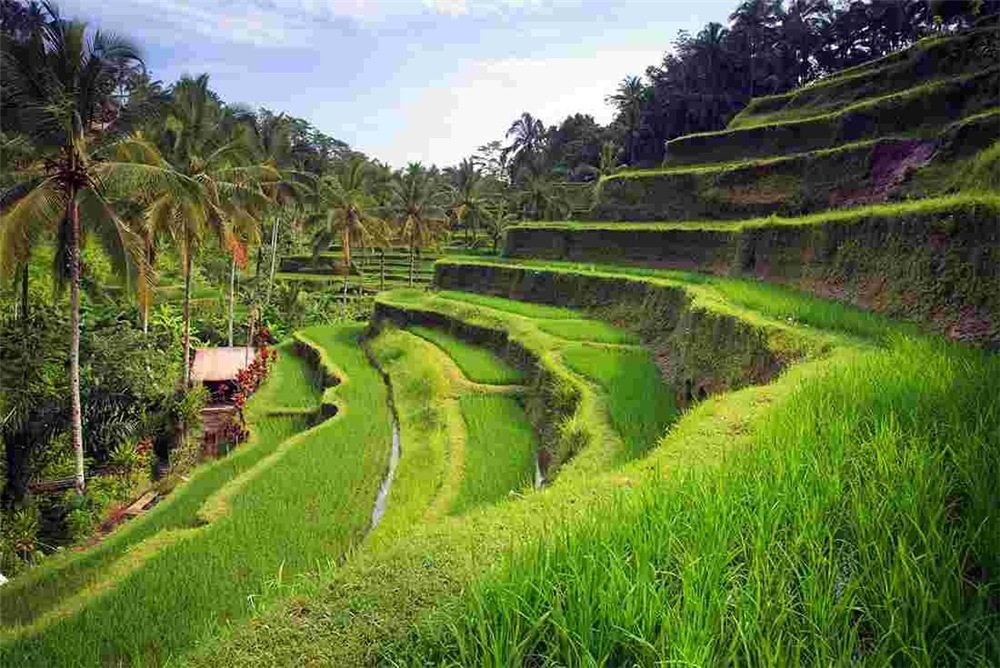 And here is the San-ge complex of Hindu temples. The bus smoothly enters the Monkey Forest, where, as it quickly turns out, many, many wild Javanese macaques live. They live here in a semi-wild state. The monkey is perhaps one of the most respected animals by Hindus. This veneration is associated with the ancient epic Ramayana. It has such an important person as Hanuman - the leader of the monkey army, a faithful friend and assistant to the protagonist Rama. Still would! When Rama saves his wife Sita from the evil demon Ravana, then at the most crucial moment, the monkey troops of Hanuman came to his aid. They held each other by the tails, thus forming a living bridge, on which Rama and his beautiful wife Sita crossed a deep abyss.

Legends are legends, but one day pundits set out to find out which monkey was the prototype Hanuman. They racked their brains for a long time, but they didn’t find out anything for sure. Someone believes that Hanuman was a gray hulman monkey living in India, and someone sees a Javanese macaque in this image - this monkey is also called a crabeater. She is not afraid of water, swims and dives superbly. Be that as it may, it is difficult to imagine the Indian epic today without Hanuman. 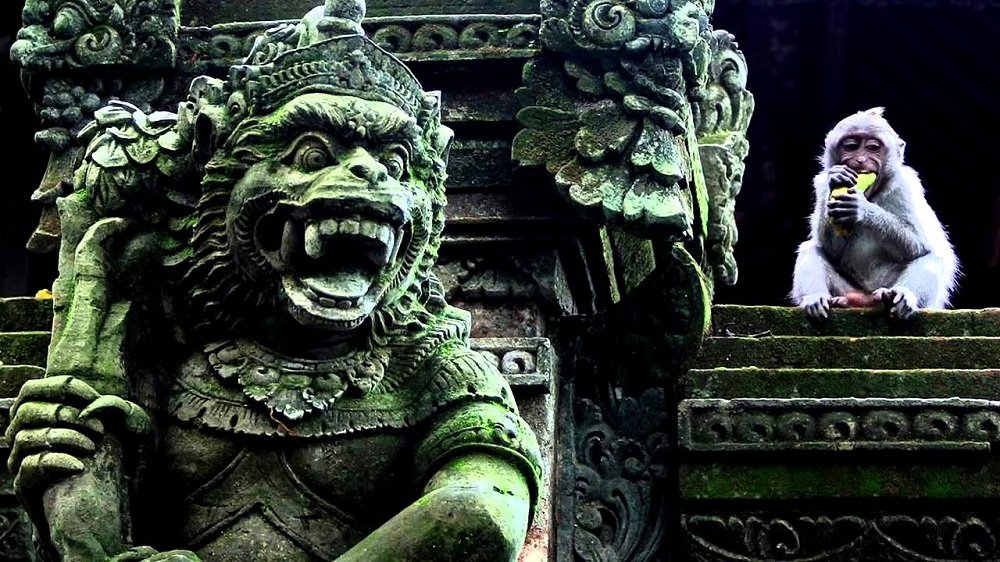 However, let's return to San-ge, where there are so many of these sacred monkeys that at first you simply go crazy from their abundance. Then anxiety comes - these macaques are not embarrassed by anyone - they know that people will not harm them. Therefore, well-fed beggars behave arrogantly, persistently begging for gifts, pulling guests by the pants and skirts. A little gape - bam! - and there is no longer an expensive phone or glasses. Then, no matter how much you “gook”, luring the animal towards you, you may not get everything stolen back. It remains only to passively observe how the impudent person plays out to the public the plot of Krylov's fable "The Monkey and Glasses". Everyone is laughing, but the glasses are yours, not these laughers!

As noted above, there are many Hindu temples in Bali. Most of them resemble villages surrounded by fortified walls. Sometimes there are even ditches with water. At the gate, as a rule, there are statues of gods - not necessarily good, notorious villains come across ...


Traditionally, Balinese temples have two courtyards - secular and one where certain religious rites are held. Also, there must certainly be a watchtower, a pilgrimage house, a kitchen ... That is, a Balinese temple is a rather isolated world, subject to its own laws. Usually all temple roofs are of the same type - they look, of course, in different ways, but the roofs of all are equally shaggy, because they are covered with pile of sugar palm trunks. These are very durable trees that are used for construction and other household needs. They make the best drums, for example. And the fibers covering the tree trunk are also used to make ship tackle, fishing nets, weave mats.

First of all, when they come to rest in Bali, many tourists are introduced to the rules, customs and taboos that are inherent in Hinduism . They have to be fulfilled in order not to be considered an ignoramus, with whom no one wants to deal. Let us remind you of some of them. 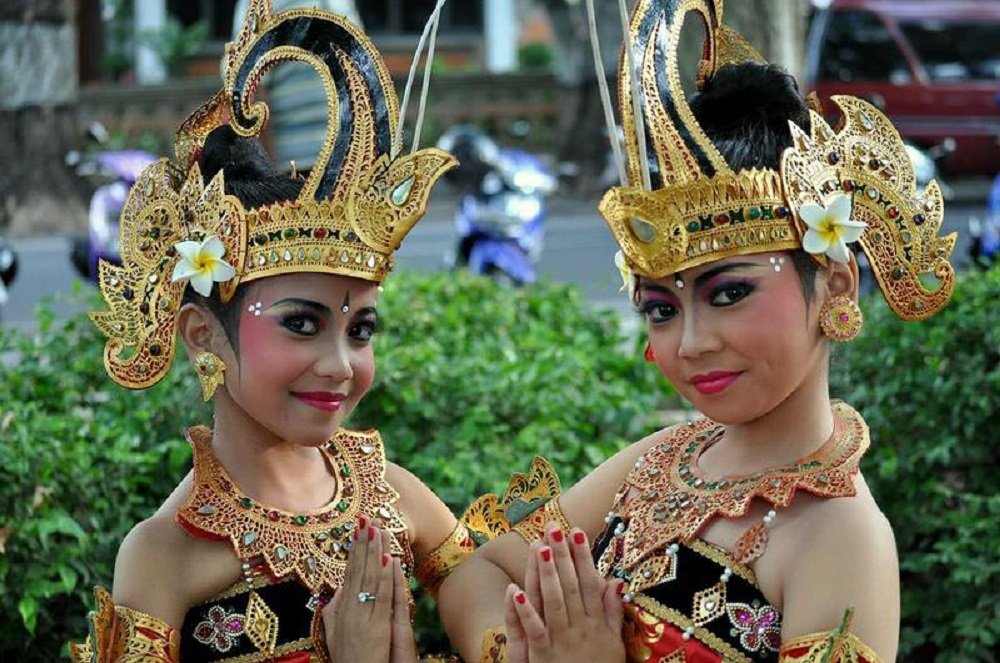 The Balinese are good-natured and charming people. Photo:  piliggrim.ru

So, you can’t point your finger at anyone, especially with your left hand, it is considered dirty. You can’t point your foot at anyone either - this is just as big an insult, since, according to Balinese Hinduism, the legs are not just the lower, but also the lower part of a person. In order not to get into an awkward situation, many experienced travelers suggest that “dummies” tourists not to throw one leg over another in order to avoid “leg-pointing”. Suddenly misunderstood. Also, you can not touch anyone's part of the head, because it is the repository of the soul of each individual. If you touched her, then - of course! - "grabbed the neighbor by the soul." So in no case should children be stroked on the head, no matter how charming they may seem!

By the way, before the age of one, the Balinese do not even lower their children to the ground. And why, because they still do not know how to walk? So what's the point of doing it - crawling, moving like animals? No, this is not possible - during reincarnation, the soul can move into an animal, and this is completely unacceptable. But we remember that a year in Bali is 210 days, right? True, it is still not very clear how they manage to keep their children from feeling the earth for more than six months.

The main battle for the Turkish Stream is still ahead

Kuala Lumpur: all of Asia in one country

Bows and fishing rods: holidays for every taste will be offered to tourists in the very center of Russia

The place where the emerald Buddha changes his clothes