From 2023, the Formula 1 Russian Grand Prix will move from Sochi to the Leningrad Region.

VTB plans to create a world-class karting center in Sochi and will discuss with Sirius the development of motorsport in the region after the move of the Formula 1 World Championship to St. Petersburg in 2023. This was announced to TASS on the sidelines of the Eastern Economic Forum by the head of VTB Andrey Kostin.

Rosgonki, which we are the founders of, will operate two venues [in Sochi and St. Petersburg]. We are discussing with Sirius, who has become the owner of this entire territory [where the Russian Grand Prix is held], the development of motorsport in Sochi. Perhaps we will create a world-class karting center there, - said Andrey Kostin. - As for Formula 1, it will be [in Sochi] until 2023. Then the government of the Leningrad Region should provide certain infrastructure works, but these issues will be resolved.”

“This year's Grand Prix will be held in Sochi at the end of September. With 50% occupancy [of stands],” added Andrey Kostin.

The VI Eastern Economic Forum is being held in Vladivostok on September 2-4 in a hybrid format, the main theme of the business program is “New Opportunities of the Far East in a Changing World”. In addition to the main events, the Youth EEF and the VEF Junior forum, as well as the Far East Street exhibition, will take place. The forum is organized by the Roscongress Foundation. TASS is the general information partner and official photo host agency of the event.
Russia Sochi auto Formula-1 VEF-2021 TASS
|
Facebook
|
Twitter
|
VKontakte
|
Odnoklassniki

The route of the upcoming Silk Way Rally became known 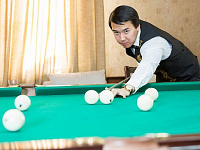 The first children's regatta was held in the North Caucasus

Thousands of Turkmens climbed the Path of Health