Weightlifter from Qatar Faris Ibrahim Saeed El-Bah became the winner of the Olympic weightlifting tournament in the weight category up to 96 kg. This medal was the first award of the highest standard at the Olympic Games in the history of Qatar.

The athlete in total showed a result of 402 kg (snatch - 177 kg, clean and jerk - 225), setting an Olympic record. In 2018, there was a revision of the weight categories, as a result of which the number of medals for men and women became equal and new weight categories appeared. Such changes were due to the fact that the International Weightlifting Federation wanted to show the International Olympic Committee that the federation was not satisfied with the situation with doping, and a change in weight categories would lead to the reset of Olympic and world records.

The weightlifter from Venezuela won the silver medal Keidomar Vallenilla (177+210; 387 kg), the same result was shown by the bronze medalist Anton Plesnoy from Georgia (387 kg), who lost to the Venezuelan in additional indicators.
< br> The Ibrahima Saeed El Baha medal was the first medal awarded to the Qatar team at the Tokyo Games, as well as the first medal of the highest standard in history. Previously, the best result of the Qatari national team was the second place in the high jump of the athlete Mutaz Barshim at the 2016 Games in Rio de Janeiro. In total, Qatar now has 1 gold, 1 silver and 4 bronze medals at the Summer Olympics.

Run "Save the Snow Leopard" will be held in Bishkek

More than 1300 athletes will take part in the start of KAVKAZ.RUN-2018

Japan is almost ready for the 2020 Olympics

China is recruiting volunteers for the 2022 Olympics 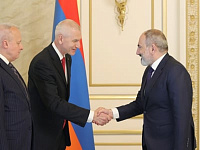 Russia and Armenia will continue cooperation in the field of sports