The match dedicated to the anniversary of the hockey Super Series can be held in the UAE.

A match dedicated to the 50th anniversary of the hockey Super Series between the national teams of the USSR and Canada, can be organized in United Arab Emirates. This was told to TASS on Saturday by a participant in the series, a two-time Olympic champion and a seven-time world championAlexander Yakushev.

The super series took place from September 2 to September 28, 1972 in Canada and the USSR. Yakushev became the top scorer of the Soviet team.

"We would love to celebrate the anniversary of the Super Series, and Canadians would come to us. They invited us to their place, but all this was before the well—known events," he saidAlexander Yakushev. — Now there is hope to play a match of veterans, but not those who played in 1972, but those who finished playing in the National Hockey League. There are plans to hold such a game in In the United Arab Emirates, it seems that it should work out, one of our people living in Israel took up this case."

"This is not a poor person, and he takes all the costs on himself, God grant that this will happen, but a lot will depend on our organizations," he added.

In December last year, Dubai hosted a scheduled match of the Kontinental Hockey League between Ak Bars and Avangard (3:1). 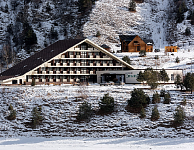 Chechnya is preparing to open a new ski resort

Closing ceremony of the Olympic Games ends in Tokyo