Tokyo Olympics medals to be made from waste

To do this, it is necessary to collect more than four tons of silver, almost three tons of bronze and 30 kilograms of gold.

Three years ago, the organizing committee of the games came up with the idea to cast Olympic medals from precious metals obtained from electronic waste. A year later, the official website of the Tokyo Olympics asked citizens to turn in obsolete, unnecessary or broken devices.

For such an initiative sports ranks ovnikov pushed statistics. According to calculations, in 2014 alone, the island nation was able to obtain more than 1.5 tons of silver, 1.1 tons of copper and almost 143 kilograms of gold from electronic waste.

The initiative turned out to be so popular among the inhabitants of the Land of the Rising Sun, that by now the required amount is almost collected. After special processing, all waste will turn into two tons of precious metals, from which five thousand medals will be made for the winners of the XXXII Summer Olympic Games.

Getting ready for Beringia 2020 in Kamchatka

The South Korean team received $ 2.24 million for reaching the final of the 2018 World Cup 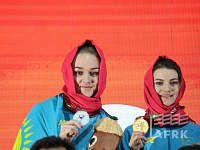