The team of Russian diplomats won the football tournament in India

A football tournament among diplomatic missions was held in the Indian capital, timed to coincide with the start of the 2018 World Cup. The team of the Russian Embassy became the strongest.

The second was the French, the third - the team of the UN office. In addition to the winners, teams from Kazakhstan, China, Germany and Denmark took part in the competition.

Russian Ambassador to India Nikolai Kudashev and representatives of the diplomatic missions participating in the championship came to support their colleagues. The guests of honor were the Minister of Youth and Sports of India, Rajyavartan Singh Rathore, and the President of the Delhi Football Association, Shaji Prabhakaran.

As Singh Rathore noted, despite the fact that the most common game in the country is cricket, football Over the past few years, more and more fans have appeared. And, perhaps, after some time, the Indian team will be able to break into the final part of the World Cup.

Considering the hot climate, the matches were held according to a simplified system: the fights began in the early morning, and a little later than noon (before the peak heat) the winner has already been determined.

Russian Ambassador to India Nikolai Kudashev noted that the diplomatic mission is very pleased that colleagues from other countries supported the initiative of the Russian embassy. As the Russian ambassador noted, sport is a language of communication that everyone understands, which helps to establish a dialogue with representatives of other countries and strengthen international relations.

The Russian mission did not rule out that football competitions could become annual. 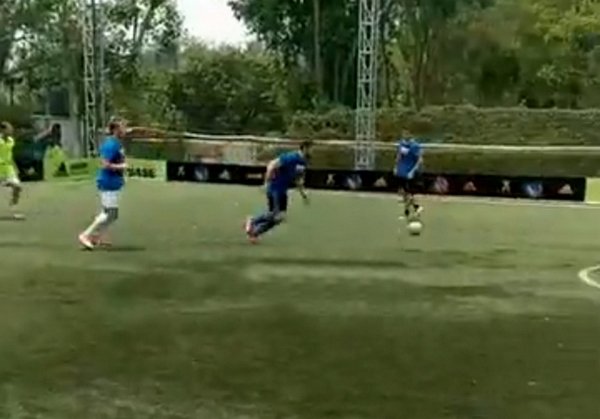 The moment of the attack of the team of the embassy of the Russian Federation. Photo: Russian Embassy in India | Facebook

Qatar is ready to host the 2022 FIFA World Cup

Swimmer Evgeny Rylov won the second gold of the 2020 Olympics

Swimming across the Bosphorus in Istanbul

Turkmenistan introduces restrictions on the sale of alcohol