An example of the successful performance of compatriots at the Summer Olympics in Tokyo helps Russian athletes prepare for the Winter Games in Beijing with enthusiasm. Oleg Matytsin, Minister of Sports, stated this to journalists at the opening of an exhibition dedicated to Olympic champions and prize-winners of the Olympic Games in Tokyo.

low bow. The games were not easy for everyone, not only for the Russian team, but they performed in an even more difficult psychological state. And what they have shown is a great feat, the result of the enormous work of our doctors, regional leaders, and a huge number of specialists. This exhibition shows that we are indeed a sports nation,” said Oleg Matytsin.

“Our team is preparing for the Games in Beijing with the same enthusiasm,” the minister added. 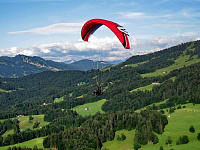 Russian Paragliding Championship to be held in Nalchik

Athlete of the Year chosen in Georgia