Russian figure skaters retained their leadership on the results of the second day of the World Team Championship.

For hire Mikhail Kolyada got 180.72 points. In the short program on Thursday, he finished fifth. The victory in the free program was won by the American Nathan Chen (203.24), the second place was taken by the Japanese Yuzuru Hanyu (193.76), the Russian Evgeny Semenenko showed the fifth result (166.33).

The Russian team retained its leadership in the standings, gaining 91 points based on the results of six types of the program. In second place is the US team (83), in third is the Japanese team (78). 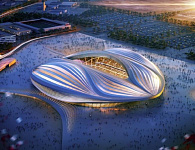 Football to be! Qatar prepares to host the 2022 FIFA World Cup

Women to comment on football for the first time in Iran

The Olympic flag arrives at the Great Wall of China