The 2021 Silk Way Rally will be held in Russia, Mongolia and China.

The route of the rally-raid "Silk Way" in 2021 will pass through the territory of Russia, Mongolia and China from 1 to 11 July. This was reported by the press service of the competition.

The race starts in Omsk and finishes in Chinese Urumqi. Participants will have to overcome 10 sections with a total length of 5 thousand km. km, almost half of the distance will be on high-speed special stages.

The route will include areas not previously involved in rally: Altai in Russia, Mongolian Altai and new areas of the Gobi Desert in the territory of Mongolia and China. “The Silk Road team did not stop the process of preparing the rally-raid throughout this year and continues to develop the route of the race of the future edition. In  next July, new regions will open up for the participants — the rally route will pass through territories where the treads of racing wheels have not yet left traces: hospitable Siberia and Altai Territory with amazing nature and stunning landscapes, new regions in Western Mongolia, completely different from the last edition, when we first visited the land of the Blue Sky; and  the obligatory part - the dunes of the Gobi desert, so expected by every pilot, - said the project manager Vladimir Chagin.

It is reported that crews consisting entirely of young people not older than 29 years old, as well as women's crews will be able to participate without paying entry fees. Starting in 2021, manufacturers will have the opportunity to test their promising developments in real rally-raid conditions. In addition, within the framework of supporting the environmental program of the project, special conditions will be provided for crews on vehicles using new types of natural fuels: natural gas (methane), propane or hydrogen.

The rally has been held since 2009. The 2020 race was canceled due to the coronavirus pandemic. The Russian team "Kamaz-master" is the current champion of the raid in the class of trucks.

Participants of the World Luge Championship arrived in Sochi

Japan's 100 Most Influential People in the World 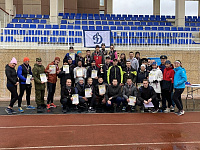 Motofestival will be held in Mongolia