The IOC has announced that the Beijing Olympics will have stricter anti-COVID measures than Tokyo.

The anti-COVID measures at the Beijing Olympics will be stricter compared to those at the Tokyo Games. This was reported to journalists by the operational director of the International Olympic Committee (IOC) Pierre Ducret.

The Beijing Olympics will be held from 4 to 20 February, Tokyo hosted the Games in summer 2021.

“Compared to the Tokyo Olympics, there are several important differences. First, in order to be admitted to the so-called "closed system" it is now necessary to be fully vaccinated. Secondly, here each participant will undergo PCR testing daily. As you remember, in Tokyo, this rule only applied to athletes in the Olympic Village and people from their environment, but not everyone,    said Ducret.

“Compared to Tokyo, the most important difference is that the closed system will be completely cut off from the outside world,” he added.

Also, the IOC COO noted that the Beijing Olympics will have special requirements for masks, only certain types of masks will be allowed to be used. 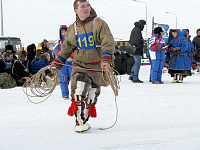 Extreme race will be held in the UAE

Plans to build a tennis academy in Sochi

Guards won for the fifth time in a row

Afghan runners prepare for the Olympics