Part of the Olympics competitions can be held in empty stands

At the Tokyo Olympics, about 40% of the competitions can be held without spectators.

About 40% of the competition at the Summer Olympics in Tokyo, which starts in less than three weeks, may be played without spectators if the organizers decide to further lower the limit on the attendance of sports venues. This was reported on Sunday by the Kyodo agency.

It is noted that the main option is to reduce the current stadium occupancy limit from 10 to 5 thousand seats. In this case, all events for which more than 5,000 tickets were sold. tickets, as well as those scheduled for time after 21:00, will be held without spectators.

This will affect matches in football, baseball, basketball, athletics, and opening and closing ceremonies of the Olympics.

Next week, the organizers of the Olympic Games will hold a five-way online meeting, the main topic of which will be the discussion of issues related to the allowable number of spectators in stadiums. The head of the Tokyo 2020 organizing committee, Seiko Hashimoto, at a press conference on Friday, said that the organizers are ready for the option of holding the competition without spectators. A similar point of view was expressed by Tokyo Governor Yuriko Koike.

Jeep trial will be held in Uzbekistan 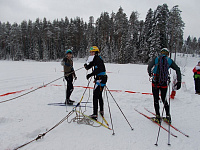 Sports tourism championship will be held in Yamal

The rally "Silk Way" continues in the Astrakhan steppes