An athlete from Georgia was recognized as the best among youth.

The United World Wrestling (UWW) recognized the Georgian heavyweight Zviad Pataridze as the best wrestler of 2018 in the U23 age group. The organization announced this on its website.

This year, Pataridze won the title of world champion in his age category for the sixth time. He received gold in the 120 kg weight category at the youth championship held in Romanian Bucharest in November. In total, the Georgian wrestler has more than ten titles in the main competitions of his age group. 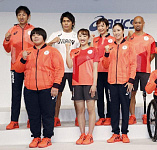 Katunsky Nature Reserve invites you to the "Reserved Ski Track"

Speed skating competition to be held in Sochi

"Mountain Air" on Sakhalin will host "Children of Asia" in February