The decision to award this status to a nine-year-old schoolgirl was taken by the members of the Japan Ancient Game Association unanimously.

Officially, the resolution of the organization will come into force in April of this year - with the start of a new playing season. By this time, Sumie Nakamura will already be 10 years old. Nevertheless, she will remain the world's youngest professional player, TASS reports.

The girl started playing the logic game, which originated in ancient China several thousand years ago, at the age of three. In four years, she has achieved outstanding results and has been studying with professional masters in South Korea since she was seven years old. best among middle school students. The girl added that “someday I would like to become a world-class player.”

Go originated in ancient China, according to various sources, 2-5 thousand years ago. The game is played on a rectangular table (goban), lined into squares. The standard field has a size of 19x19 lines. Two participants receive stones in black and white. The victory is awarded to the one who, with his chips, fences off a territory on the board that is larger than that of the opponent.

Today, Go is considered the most widespread game in the world and is one of the five main disciplines of the World Mind Games.

For the first time, doping tests on dry blood stains will be conducted at the Beijing Games 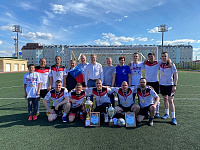 A hockey match was held on the ice of Lake Baikal

Youth sports games will be held in Vladivostok