Japanese athlete Yoshihide Muroya snatched victory from the leader of air races in single-engine sports aircraft, beating him by only 0.003 seconds. This is a historical record for the minimum time gap.


The race took place in Abu Dhabi, the capital of the United Arab Emirates. For the twelfth time in a row, the expanse of the sea and iconic skyscrapers provide the backdrop for the breathtaking acrobatic Red Bull Air Race in the Master category.

It was here that the new season of competitions in the speed passage of a difficult route, periodically held in one or another large city of the planet, opened.

2017 World Champion Yoshihide Muroya piloted flawlessly in 53.780 seconds. The 2018 champion Martin Sonka was just 3 thousandths of a second behind him in time. The leader now has 28 points, while the Czech Sonka has 22. However, the point will only be made at the end of the air racing season.

Unfortunately, Nicolas Ivanoff was unable to take part in the Final Four due to problems with the ignition - the engine of his air car did not start. In third place is Michael Gulian. He has 21 points.


For the first time, Muroya loudly announced himself in 2016 during an air race held in his homeland, in the city of Tobe. The athlete has been flying since 1991. He is the first pilot from Asia to break into the top division of the Red Bull Air Race. In 2011, Muroya became a goodwill ambassador for the devastated and depopulated after the Fukushima nuclear disaster. He also repeatedly participated in the European and World Championships in complex aerial acrobatics. 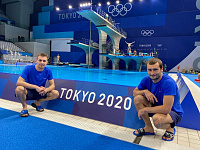 Krasnoyarsk will host the World Championship in wrestling