Russian boxer Muslim Gadzhimagomedov will hold the final fight of the Olympic heavyweight tournament on Friday, Zaurbek Sidakov will perform in the decisive fight of the freestyle wrestling competition.

In addition to Gadzhimagomedov, who will face the Cuban Julio La Cruz, Zenfira Magomedaliyeva will also compete in the boxing tournament on Friday, her opponent in the semifinals will be the Chinese Li Qiang< /b>.

Sidakov in the final of the freestyle wrestling tournament in the weight category up to 74 kg will meet with the representative of Belarus Magomedkhabib Kadimagomedov . The winner of the 2016 Games, four-time world champion Abdulrashid Sadulaev (up to 97 kg) will begin the path to the second Olympic gold, and the winner of the world championship Gadzhimurad Rashidov will perform in the category up to 65 kg. In women's freestyle wrestling, the European champion Stalvira Orshush (up to 50 kg) starts.

Elvira Khasanova will compete in the 20 km race walk. The competition will be held in Sapporo. They were moved to the north of Japan so that the athletes did not suffer from the heat, but now in the capital of the 1972 Winter Games, hot weather has also set in (over 30 degrees Celsius).

In the modern pentathlon, a set of medals will be played by women. The Russians Ulyana Batashova and Gulnaz Gubaidullina can count on the award.

The Russian women's handball team, which is the 2016 Olympic champion, will try to reach the final again. In the semi-finals, it will face the Norwegian team - one of the strongest teams in the world. In the 1/2 finals of the Games in Rio de Janeiro, the Russians managed to snatch victory from the Scandinavians in overtime.

Russian football teams did not qualify for the Olympics, but the tournament does not take place without representatives of the country - the referee Anastasia Pustovoitova was entrusted with judging the women's final with the participation of national teams Sweden and Canada. Due to the heat, the start time of the match was postponed to the evening - the game will start at 21:00 (15:00 Moscow time).

Also on Friday, for the first time in the history of the Olympic movement, medals in women's climbing will be played. Russian athletes could not qualify for the final.

Individual all-around starts in rhythmic gymnastics. The multiple world champion sisters Averina - Arina and Dina will perform in the qualification. 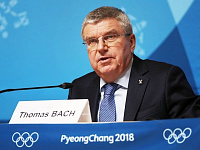 Russia will host the World Corporate Winter Games in 2023