More than 2,000 people play chess and checkers in the republic.

The Minister of Education and Science of the Russian Federation Olga Vasilyeva and the head of Kabardino-Balkaria Yuri Kokov signed an agreement at the Russian investment forum in Sochi to open a Chess Lounge club in the republic on the basis of the Quantorium children's technopark, the press service of the regional administration reported on Thursday.< br>
According to the Republican Federation of Chess and Drafts, the KBR already has a municipal children's chess and drafts club "Ladya" in Nalchik (600 students), but the popularity of these sports is growing. More than 2,000 people play chess and checkers in the republic, 1,550 of them are children. These sports are most popular in Nalchik, Prokhladny, as well as in the Tersky, Baksansky, Chegemsky, Chereksky, Prokhladnensky and Zolsky districts. on the opening of the "Chess Lounge" at the Quantorium Children's Technopark of the "Sunny City" Academy of Creativity. The corresponding agreement was signed by the Minister of Education and Science of the Russian Federation Olga Vasilyeva, the head of the KBR Yuri Kokov, the head of the Foundation for New Forms of Development of Education Marina Rakova, the chairman of the board of trustees of the non-profit organization " Professional chess club "ProfChessClub" by Mikhail Dvorkovich," the message says.

The press service noted that the organizers of the investment forum noted the significant contribution of the KBR to the development of the system of additional education. pupils of the children's technopark "Kvantori mind".
The Russian Investment Forum is being held in Sochi on February 15-16 with the participation of Prime Minister Dmitry Medvedev. This is a traditional platform for presenting the investment and economic potential of the Russian Federation. Last year, 377 agreements worth 490 billion rubles were signed at the forum. The forum organizer is the Roscongress Foundation. TASS is the general media partner and host photo agency of the forum.
Kabardino-Balkarian Republic Nalchik Yuri Kokov Olga Vasilyeva chess club Forum in Sochi
|
Facebook
|
Twitter
|
VKontakte
|
Odnoklassniki 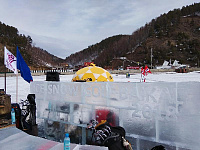 18 years ago, regball appeared in Russia

The first children's regatta was held in the North Caucasus

Russia will help Kazakh figure skaters prepare for the Olympics

Russian hockey players reached the semi-finals of the 2022 Olympics

Vietnam may impose a tax on sugary drinks

In Turkey, the main pahlavan was determined